Did former Secretary of State and retired Army General Colin Powell urge "the U.S. military to recall [retired Army Lieutenant General] Michael Flynn and put him on military trial for sedition?" No, that's not true: There is no record of Gen. Powell attacking Lt. Genn. Flynn in such a public statement, but Powell's former chief of staff retired U.S. Army Col. Lawrence Wilkerson, did call Flynn a "disgrace to his uniform" and suggested in a MSNBC interview on December 21, 2020, that he be court martialed for suggesting that martial law be used to rerun the election in some states.

The claim that it was Powell making the statement appeared in a December 23 story on the Palmer Report website. The story was later revised to relect the remarks of Wilkerson, however screenshots of a Palmer Report aticle and a deleted tweet continued to circulate on social media, including a Facebook post (archived here) shared December 24, 2020. It opened:

General Colin Powell is now urging the U.S. military to recall Michael Flynn and put him on military trial for sedition. 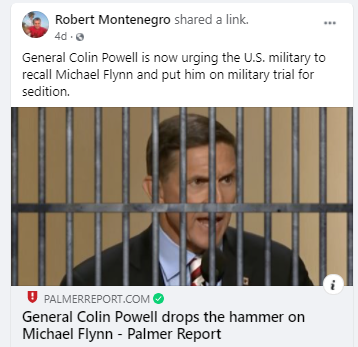 This is the initial Palmer Report tweet, screenshots of which are still circulating on social media, even though the tweet has been deleted. It begins:

General Colin Powell is urging the U.S. military to recall Michael Flynn and put him on military trial. 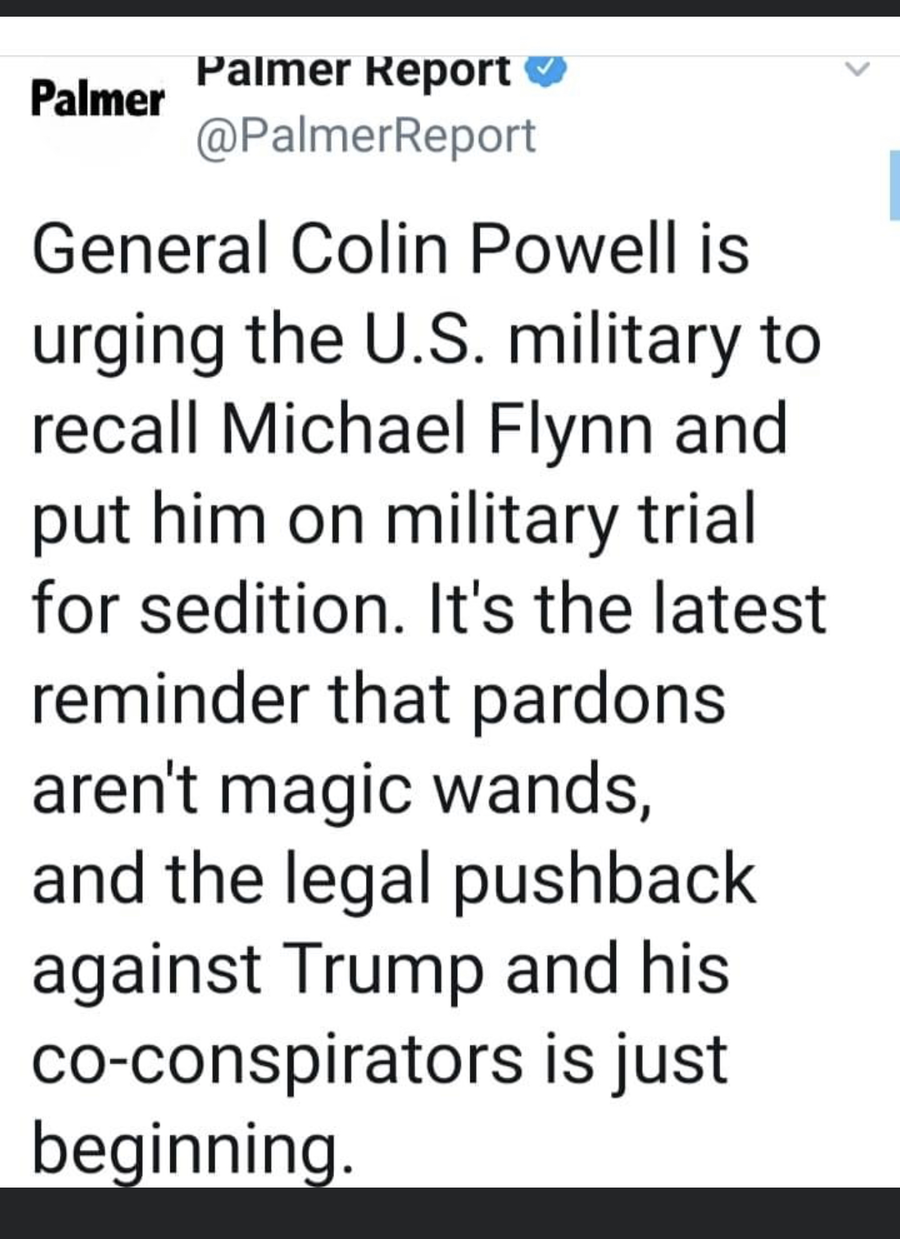 On December 17, 2020 Flynn, who had served as National Security Advisor in the Trump administration, appeared on "Greg Kelly Reports" on Newsmax, a video of which is posted on the cable station's website. (President Donald Trump pardoned Flynn in November 2020 for charges stemming from special counsel Robert Mueller's Russia investigation.) The show's host asked Flynn what options Trump had remaining to contest the outcome of the presidential election. At about the 14-minute mark of the 41:40-minute video, Flynn responds:

I don't know if he is going to take any of these options. The president has to, he has to plan for every eventuality because we cannot allow this election and the integrity of our election to go the way it is. This is just totally unsatisfactory. There is no way in the world that we are going to be able to move forward as a nation with this

Flynn continues at about the 14:25-minute mark:

The president could immediately, on his order, seize every single one of these machines around the country -- on his order. He could also order, within the swing states, if he wanted to, he could take military capabilities and place them in those states and basically rerun an election in each of those states. It is not unprecedented. These people out there talking about martial law like it is something that we've never done.

Later in the video Flynn said he was not calling for martial law because "we clearly have a constitutional process."

On December 21, 2020, Wilkerson appeared on "All In With Chris Hayes" on MSNBC. The show's host asked him about using martial law to rerun the presidential election. This is Wilkerson's response beginning about the.41-second mark of the 6:32-minute video posted to the MSNBC YouTube account:

My first reaction, of course, is don't take counsel of your fears. We've just gone through one of the most incredible election sequences in our nation's history, certainly since World War II. More people voted by more methodologies in a pandemic environment, etc., etc. I have to commend all those people who worked so hard to deliver a free and fair election. At the same time, I say that, I have to say my fears are somewhat significant -- with a former lieutenant general in the United States Army saying what Flynn said, with regard to martial law, and going to the battleground states and essentially reconducting the elections.