Did Amazon spray chemicals on their boxes which resulted in sick or dead pets? No, that's not true: Amazon said it does not treat their cardboard shipping boxes with either pesticides or disinfectants. A box industry spokesman said they know of no shippers who spray cardboard boxes with chemicals harmful to pets. A chemist who studied potential risks of cardboard to pets said there is no danger. A national pet hospital spokesman said their facilities have treated no ats or rats sickened by boxes.

The rumor spread in several formats around Christmas, including one version containing many screenshots posted (archived here) on December 26, 2020 with the caption "DONT GIVE YOUR PETS AMAZON BOXES !! !! !! !! !! !! I always give the cat the boxes but I didn't know this

(this was posted in a group I was in)". It included a screenshot meme that read:

Not ADHD related, but we are heartbroken and I just need to vent. Last night, my daughter was playing with her beloved rats in the "Santa Village" she made them from our delivery boxes. All of a sudden, one of her rats fell over and started "rolling" almost like his front legs were paralyzed and acting like her was struggling to breathe. A few minutes later, her second rat did the same. They both died. I don't know if it was the boxes or what happened, but a friend sent me something saying they are spraying boxes with chemicals toxic to rodents. Most of her christmas presents under the tree are Rat related.. rat toys, a hammock, Minecraft fleece for their cage, little rattan hidey huts. She's a mess about it and I'm trying to stall the opening of gifts until I figure out what to do. Can 2020 just be over please?!?

The screenshots contain two different scenarios where pets had a mysterious reaction to something. There are also some screenshots of a text conversation with Amazon customer service which appear to confirm the spraying of something.

Another screenshot shows a photo of a cat's raw tongue and a screenshot of a reply to a private message which says:

This now makes so much sense!!! I had to take my cat to our emergency vet the other night. They said her tongue had chemical burns!!! I had Amazon boxes like crazy coming in for Christmas. If I wouldn't of taken her to the vet she would of died overnight!

The photo included in the private message conversation originated in a widely circulated post about a cat named Alex. It appears that the original post was deleted but many other copies have been posted. it reads:

FYI ladies and gents.. Going to put this out there as a warning to others!!! This is not my cat!

We had to take our Alex to the emergency vet the other night. She almost died. The cause....pesticides on AMAZON BOXES!
Yes Amazon sprays ALL boxes with spray to kill rodents!
This visit cost us over $400!!! If we wouldn't of taken her, she would have died.
She had chemical burns to her tongue, fever, lathargic, shallow breathing, sticky drool. Watch your pets y'all!
She's finally almost

and eating again. I pray to never experience something like this again.
Please watch your babies and WASH your hands anytime you handle any boxes from there. Don't let kids or animals play with the boxes! 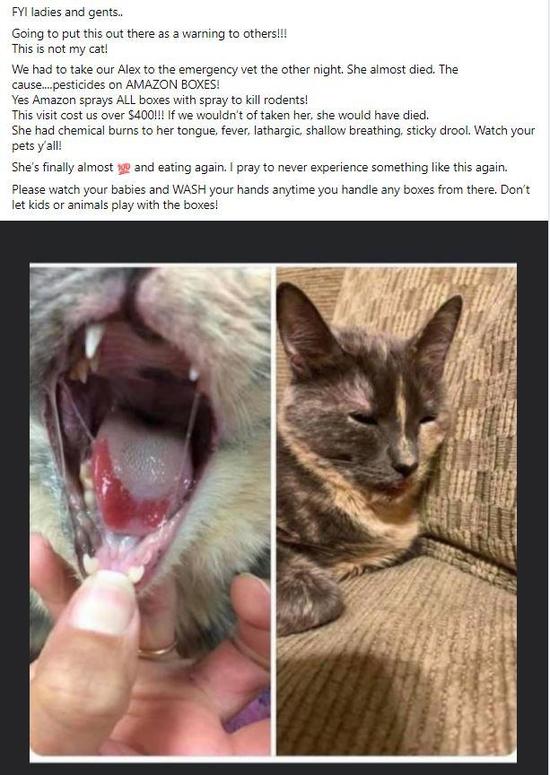 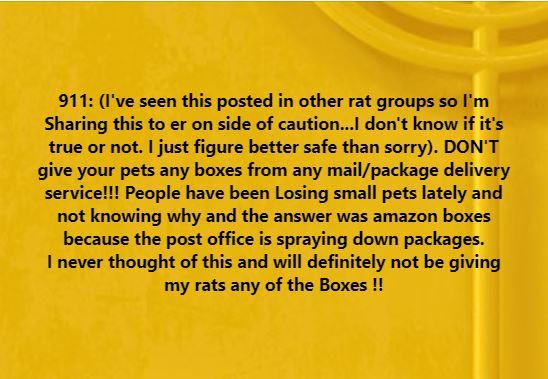 Lead stories reached out and spoke on the telephone with Leah Seay, the spokesperson for Amazon. We asked her about these claims regarding spraying chemicals, and the screenshots of the customer service conversation. She said that Amazon does not spray anything on their boxes, not pesticides and not disinfectant. She said that the customer service representative was mistaken.

Lead Stories also reached out by email to Laura Fourniotis, the Media Relations Specialist at Blue Pearl, a national network of specialty and emergency pet hospitals to ask if they had observed any trends across the country, like what was described in these viral posts, regarding pets and cardboard boxes. She relayed our question to their Chief Medical Officer and national medical leadership team. The response:

Just confirmed; we have not seen any cases relating to cardboard box toxicity. Should anything arise, I will be sure to let you know.

We also spoke on the telephone with Deb White, who is both a chemist and bird toy designer to be sure we considered the feathered friends as well. She is the author of the article, "Is Cardboard Safe For My Bird?" White has not heard of any pet birds who have been sickened by cardboard.

Lead Stories sent enquires by email to the two main Cardboard Box Industry associations in the USA, and heard back from The Fiber Box Association. The Senior Vice President, Rachel Kenyon, explained:

We are not aware of any member company who is treating boxes with anything that could be harmful to pets. Boxes are high touch packaging products primarily made from three natural ingredients fiber, moisture (water) and corn starch. While there are some boxes that require additional coatings and treatments for specific applications, the majority of transport boxes do not require any treatments at all.

Lead Stories has also reached out to the Public Relations Representative of the United States Postal Service and will update the article as appropriate when they or the American Forest and Paper Association respond.