Does gold fringe on the American Flag signal imposition of Maritime or Martial Law? No, that's not true: Gold fringe is a decorative option. Although the U.S. Flag code makes no reference to gold fringe, it has been used since 1835. In 1895 the fringe was added to the flag of all regiments of the U.S. Army. The Marine Corps does have a regulation which prohibits gold fringe on a flag. Although there have been conspiracies about what significance this fringe might have, it is nothing more than an optional decoration, or as described by the American Legion, an "honorable enrichment." American Flags with fringe can be displayed indoors or outdoors, can be carried in parades, or displayed in public or private offices or in buildings such as courthouses, churches, and school auditoriums.

The claim originated as a screenshot reproduced in a post (archived here) where it was published on January 20, 2021. It opened:

"Relax everyone. Trump either signed the insurrection act or we are in martial law. The flag behind Trump this morning had a gold fringe and that signifies martial law. You can look it up. The whole Biden inauguration was not valid and he will be arrested for treason later today."

There have been conspiracies around the gold fringe on American Flags for years. The U.S. Flag code does not specifically address this gold fringe and this has left room for people to question if it is proper.

The American Legion Website has a page addressing gold fringe on American flags.

What is the significance of the gold fringe which we see on some United States flags?
Answer:
Records indicate that fringe was first used on the flag as early as 1835. It was not until 1895 that it was officially added to the national flag for all regiments of the Army. For civilian use, fringe is not required as an integral part of the flag, nor can its use be said to constitute an unauthorized addition to the design prescribed by statute. It is considered that fringe is used as an honorable enrichment only. (Military tradition)

The courts have deemed without merit and frivolous, lawsuits that contend that the gold fringe adorning the flag conferred Admiralty/Maritime jurisdiction.

There is also a page dedicated to the top ten myths about the flag:

The Flag Code prohibits the "fringing" of the flag.
Fringing of the flag is neither approved of nor prohibited by the Flag Code. The American Legion considers that fringe is used as an honorable enrichment to the Flag. Additionally the courts have deemed without merit and frivolous, lawsuits that contend that the gold fringe adorning the flag conferred Admiralty/Maritime jurisdiction. 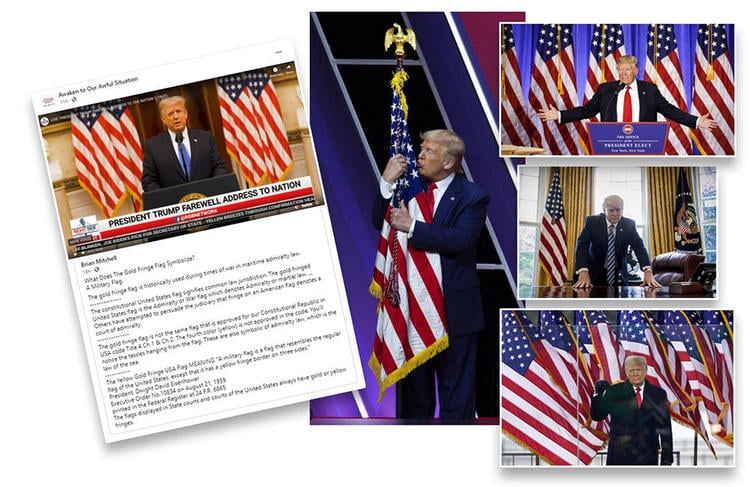 Regardless of the personal opinions and conspiracy theories about this flag code ambiguity, currently flags trimmed with gold fringe are in common use and carry no specific additional meaning. To only focus on the gold fringe trimmed flags which were displayed in the background of President Donald Trump's final videotaped address of January 19, 2021, as if that is a secret message about martial law- is to ignore that there have been gold trimmed flags featured prominently throughout this presidency.

Lead stories debunked a rumor about Donald Trump invoking the Insurrection Act in an article on January 11, 2021.