Does the Moderna COVID-19 vaccine cause full-body convulsions? No, there is no evidence proving that convulsions are a potential side effect of the Moderna COVID-19 vaccine, according to a spokesperson from the U.S. Food and Drug Administration (FDA). The Vaccine Adverse Event Reporting System, run by the Centers for Disease Control and Prevention and FDA, does not show any documented adverse events involving the vaccine and convulsions in the U.S. though millions of doses had been administered.

The claim appeared in a YouTube video (archived here) posted on January 15, 2021, under the title, "Indiana CNA blames Moderna Covid-19 vaccine for her serious side effects." In the video, a woman states:

I didn't know what else to do, other than to just come on live and show everybody what my body's going through at all wakening hours of my day.

In the video, the woman introduces herself as Shawn Skelton and explains she has been a CNA, which usually stands for Certified Nursing Assistant, for 25 years.

Throughout the 3-minute, 44-second video, her body jerks as she sits and explains her situation. She claims that she was administered the vaccine on Monday, January 4, 2021, started experiencing "mild flu like symptoms" on Tuesday and then her tongue began to "spasm out of control" on Wednesday. By Thursday, she says, she was having "full-body convulsions."

The video did not provide independent medical experts, witnesses, nor other evidence to confirm a connection between the vaccine and convulsions, nor to demonstrate that her condition has been reported to the federal recorder of vaccine side-effects. Skelton did not reply to requests for comment on her Facebook account on January 21, 2021, and then again on January 28, 2021. Lead Stories will update as appropriate when she responds.

There is no evidence Skelton, a medical professional, has reported her side effects. When asked about the claim, Abigail Capobianco, an FDA spokesperson, told Lead Stories in an email on January 26, 2021:

To date, we have not seen any new safety signals related to convulsions as a potential side effect following administration of either authorized COVID-19 vaccine. Convulsions can have any number of causes.

In the video, the woman asserts the vaccine caused convulsions because one followed the other, which could be true or could be what researchers call a correlation/causation fallacy.

I don't know what's happening to my body, ok. It's a good question to me as it is for you. But I know that on Monday I was a very functioning person, zero medical issues.

I don't know how else to prove that I'm real and thank you for your prayers and there's nothing that would convince me that this is not from the Moderna vaccine.

Skelton's Facebook profile says she lives in Oakland City, Indiana, and works at Good Samaritan Home and Rehabilitative Center in the same city.

On January 7, 2021, a 12-second video posted on her Facebook account showed her lying in what appears to be some type of medical bed, shaking rapidly.

On January 16, 2021, a photo posted on that same Facebook account showed what appeared to be a CDC vaccination card. The handwritten information indicates that she received the vaccine on January 4, 2021, at "Good Samaritan." 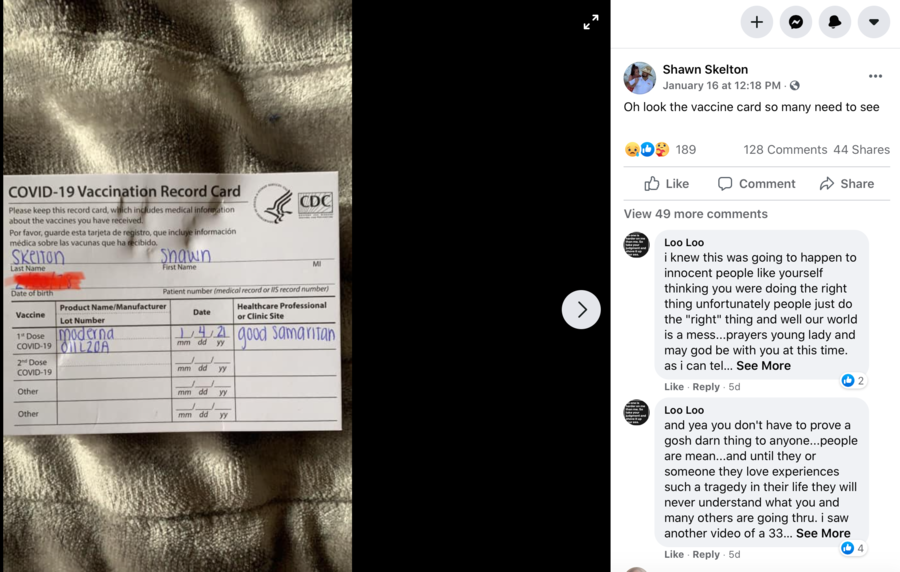 The Moderna COVID-19 Vaccine was awarded emergency use authorization by the FDA on December 18, 2020, and has since been distributed to people 18 years and older, according to the FDA's website.

The FDA website lists the reported side effects from the vaccine as fatigue, headache, muscle pain, joint pain, chills, nausea and vomiting, and fever, as well as pain, tenderness, swelling and redness at the injection site. It says there's also a "remote chance" the vaccine could cause a severe allergic reaction, including difficulty breathing, swelling of your face and throat, a fast heartbeat, a bad rash all over your body and dizziness and weakness. But the website states:

A spokesperson for the CDC told Lead Stories in an email on January 21, 2020, "CDC has no adverse event data regarding a case of this nature out of Indiana."

Megan Wade-Taxter, a spokesperson for Indiana's department of health, told Lead Stories in an email on January 19, 2021, that she can't discuss individual cases, "due to privacy laws," and then cited common side effects of the COVID-19 vaccine according to the CDC: "pain and swelling at the injection site and fever, chills, tiredness and headache."

Diane Hornby, administrator and public health nurse at Gibson County's health department, told Lead Stories during a phone call on January 19, 2021, she's not directly familiar with Skelton or her symptoms and that there hasn't been anyone who has reported side effects like hers in the county, which includes Oakland City. She said:

Since we started giving the vaccines, we have not had any problems with the vaccines other than the minor things that's listed on the vaccine information statement sheet that's given out by the state. Some people say they have a sore arm or been a little congested or little achy, low grade temp., just the normal stuff with any vaccine.

I feel the vaccine is completely safe and I totally recommend it. And I took it myself and gave it to any of my family members that qualified.

According to Capobianco, from the FDA, "all adverse events occurring following the receipt of either authorized COVID-19 vaccine can be searched by a number of criteria" in the Vaccine Adverse Event Reporting System (VAERS), a database run by the CDC and FDA.

On January 28, 2021, Lead Stories searched the database for any reported convulsion "adverse events" following the Moderna vaccine beginning December 2020 in the U.S. The search yielded no results.

Lead Stories sent messages to Moderna, but did not receive a response. We will update this, if appropriate, when they respond.

Lead Stories also called Good Samaritan Home and Rehabilitative Center in Oakland City on January 21, 2021, and was directed to American Senior Communities, which the center is a member of. American Senior Communities did not return messages on January 21, 2021 and January 22, 2021 asking to confirm Skelton's employment and vaccination, and inquiring about her claim. Lead Stories will update, if appropriate, when they respond.

According to Indiana's licensing website, a Shawn Skelton in Lebanon, Indiana, has an active registered nursing license, through October 2021.

A GoFundMe fundraising campaign was launched on January 12, 2021, and as of this writing had raised $4,877. In its description, it states that Skelton had visited several hospitals, with one telling her the movements were caused by a panic attack, and another attributing them to the vaccine.

I hope if y'all take this shot you are financially stable and didn't live check to check as I do! Because your everyday life ends and guess what?!?!! There is no help for you, no funds available unless it's strangers donating and you are ridiculed for it! Can't work, can't drive, can barely walk short distances, so sick, and just trying to load a dishwasher takes the life out of me! It could be you! Know that