Is this a video "with sound" of the Martian landscape beamed, back to Earth from the Perseverance rover? No, that assumption would be wrong. This video does show the landscape of Mars, and the scenery was captured by a rover, but the scene was not captured as a video with sound, and not by Perseverance. This video's lack of context may mislead, due to the brief title, lack of captioning and the timing, posted as it was one day after a Mars rover landing. News of the Perseverance rover landing on Mars reached Earth on February 18, 2021, and this video was posted the following day. But, this video was made from stitched-together still images captured by another rover, "Curiosity," over the course of several days from November 24, 2019, to December 1, 2019. The audio track that was dubbed over this video is of unknown origin, but was not recorded on Mars in 2019 by the Curiosity rover, which was not equipped with microphones.

The video appeared in a tweet (archived here) where it was published by @YourAnonOne on February 19, 2021, with only this brief caption:

Near the end of the 26-second video, it is possible to see the name Curiosity written on the rover's arm. 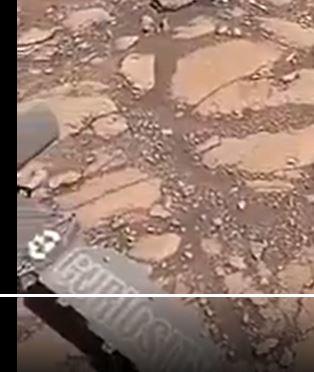 The Perseverance rover's microphones have been the subject of much hope they would successfully record the sounds of the Perseverance's 2021 landing on Mars, .

But this video posted to Twitter was made borrowing imagery that came from NASA. Over several days in late 2019, the Curiosity rover took high-definition photos. To ensure the lighting was consistent to allow the photos to be stitched together, the rover only took photos during a two-hour long period on successive days on Mars. On March 4, 2020, NASA published an article titled, "NASA's Curiosity Mars Rover Snaps Its Highest-Resolution Panorama Yet" which included an interactive format 360-degree video of the 1.8 billion pixel stitched panoramic still image that shows a region of Mars known as "Glen Torridon," and explains how the scenes in the image were captured over the 2019 Thanksgiving holiday:

It required more than 6 1/2 hours over the four days for Curiosity to capture the individual shots. Mastcam operators programmed the complex task list, which included pointing the rover's mast and making sure the images were in focus. To ensure consistent lighting, they confined imaging to between noon and 2 p.m. local Mars time each day.

Over the years several attempts have been made to gather recordings from Mars. The first attempt was the 1999 Polar Lander which is thought to have crashed on the surface of Mars. The $100,000 microphone on board that had been purchased by public funds raised by the Planetary Society was never heard from. Hopes for other microphones were dashed when the NetLander mission was canceled and the microphone on the Phoenix was never activated. The 2019 rover, Curiosity, was not equipped with microphones.

When SuperCam fires a laser at a rock, a small amount of the rock vaporizes into a hot gas called "plasma", and heat and vibration creates a shockwave that makes a popping sound. SuperCam's camera and spectrometer can "read" the hot gas to reveal the chemical makeup of the vaporized rock. At the same time, the microphone hears the staccato "pop" as the laser strikes rock several feet away from Perseverance.

The kind of "pop" it makes tells scientists about the mass and makeup of the rock. The intensity of the sound reveals the relative hardness of the rocks, which can tell us more about their geological context. For example, the hardness of the rock can help tell us whether the rock was formed in a lake or from wind-driven material, or how much pressure was involved in its formation. All without ever driving up and touching it.

NPR's Joe Palca interviewed David Gruel, an engineer at NASA's Jet Propulsion Laboratory, for a 2021 broadcast. Gruel explained what they were hoping to hear as the rover Perseverance lands on Mars:

And then, we hope to hear the wheels, the crunch of the wheels hitting the surface of Mars, followed by the pyrotechnic devices going off that separate the rover in descent stage. And then, the descent stage disappears and gets quieter and quieter. And you're left listening to the ambient noises of Mars for the first time in our history. That's awesome. It's going to be so exciting if it works.

NASA was expected to release the first video footage from Perseverance on Monday, February 22, 2021.