Did the Coca-Cola company discontinue "Vanilla Coke" in an effort to fight white supremacy? No, that's not true: This story, a satirical spin-off of a real controversy regarding online diversity training and Coca-Cola, was published originally by the well-known satire website The Babylon Bee. The story has been duplicated and spread by several other websites and blogs that are not commonly recognized as satire websites, resulting in confusion.

The original article was published by the Babylon Bee on February 20, 2021. Thetruereporter.com published an article (archived here) on February 21,2021, under the title "To Fight White Supremacy, Coca-Cola Discontinues Vanilla Coke". The text of the original Babylon Bee article has been modified in this duplicate. Thetruereporter.com article opened:

The controversial product Vanilla Coke has been discontinued because Coca-Cola fights white supremacy.

Vanilla Coke is too white!

They said that it was "too white," so they eliminated it from the market. This company's politics is to produce dark drinks to emphasize the elimination of whiteness from society.
Vanilla Coke's types starting from Cherry Vanilla to Orange Vanilla, ending with Vanilla Vanilla, will be moved back from the markets' shelves. They do not support the idea of eliminating whiteness.
A Coca-Cola executive stated on Friday that the new products embody whiteness in a racist, complex society, and it doesn't support the idea and politics of the company.

This is how the article appeared on the website at the time of this writing: 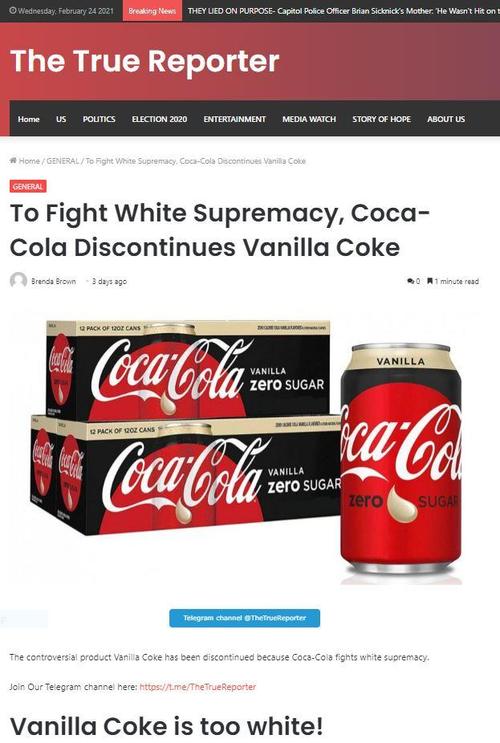 The satire article from the Babylon Bee was inspired by a true controversy that came to light on Friday, February 19, 2021, when images of slides, purportedly from an internal Coca-Cola online racism training seminar, were made public. Newsweek reported on the controversy on February 21, 2021, in an article titled, "Coca-Cola, Facing Backlash, Says 'Be Less White' Learning Plan Was About Workplace Inclusion"

The about us page on the Babylon Bee website explains their work this way:

The wording of the Babylon Bee's satire article has been rephrased. This plagiarism trick is sometimes done with a computer program and is called "article spinning." This can be done as an effort to avoid copyright detection, to fool search engines and to mislead advertising networks into ruling the website produces unique content. It can result in quirky sentences, and in the case of an article that is written as satire, article spinning may mask cues that the writer was not being serious.

Here is a sentence from the Babylon Bee:

"We will do better," he said before resigning, canceling and doxing himself, and banishing himself to a remote island in the Caribbean to think about his whiteness.

Compare to the altered sentence from Thetruereporter.com:

Also, he added, they will do better. After his statement, the Coca-Cola executive resigned, canceled, and doxed himself. He banished himself to an outlying Caribbean island to evaluate his whiteness.

Another copycat, Pressaggregate.com (archived here) wrote it this way:

"We will do better," he stated earlier than resigning, canceling and doxing himself, and banishing himself to a distant island within the Caribbean to consider his whiteness.

Below is a collection of screenshots of posts on Facebook showing how the duplicate copies of the satire article appear, and that the people posting the links are unaware, or intentionally do not indicate, this is satire or that it originated from the Babylon Bee. Some copies of the article do credit the Babylon Bee once the link is followed to the article, and others only put a credit in the fine print, or not at all. One of the posts, with the purple border, is a screenshot of the Thetruereporter.com article. The posted image shows the links -- but it is just a photo, not a shared link. People viewing this screenshot see this as a news story without being able to click on the link or evaluate the quality of the website. 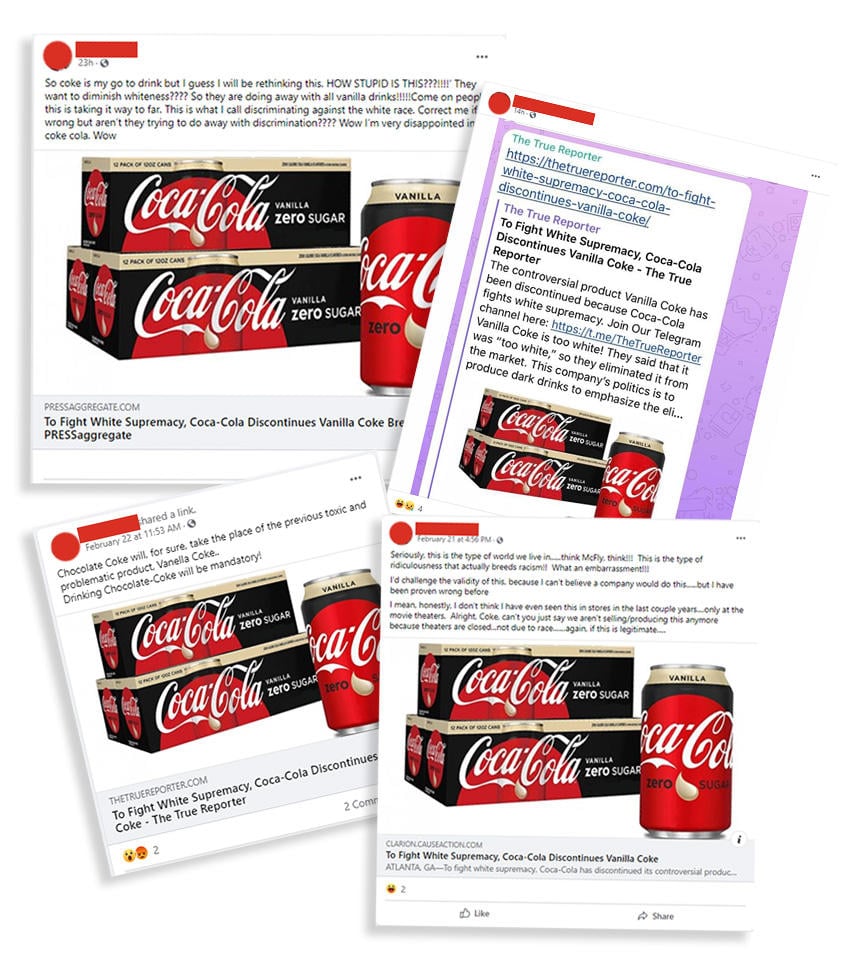