Was Bob Chapek, the CEO of Disney, arrested on child sex abuse, bestiality and child pornography charges? No, that's not true: There is no evidence that this story is anything but fabricated click-bait. The "Conservative Beaver" is well-known as a fake news publisher, and there is no evidence of this arrest ever happening. The sergeant listed as a source is no longer with the Burbank Police and the agency says there has been no such arrest.

The claim originated in an article published by Conservative Beaver on February 12, 2021, titled "CEO of Disney jailed on CHILD SEX ABUSE charges" (archived here), which opened:

The allegations include bestiality and making extremely sadistic child pornography.

The charges stem from alleged incidents of abuse that took place at Bob Chapek's residence in Burbank. The charges relate to allegations that he touched two young girls over their clothing, invited them to touch his penis and exposed his genitals to them.

"What we do know is that he has been charged with several offences in relation to sexual assault against two children... He was arrested yesterday, January 11. The allegations include bestiality, making child pornography and distributing it over social media."

The intent of the charges is to provide protection and support for the victims, said police in a press release.

This arrest comes as no surprise to many critics, who say Disney has been working hand in hand with pedophiles for years.

There is no publicly available record of the arrest described in this article. Burbank Police Department Sgt. Emil Brimway, in a February 16, 2021 email in response to Lead Stories inquiries, wrote the following:

Lead Stories has reached out by email to the Walt Disney Company and we will update, if appropriate, when they respond.

The clickbait article finishes with a final false claim of search engine suppression as an additional reason for the audience to share this false story:

Google is delisting results! Be the first to speak the truth! Share now!

A Google search for this article's headline returns this Conservative Beaver story in a first-place position, but more generalized searches do not return results for this event that never happened. A DuckDuckGo search turned up no sign of a Chapek arrest on any charges, nor did a search on Russia-based Yandex.com return any reports of a Chapek arrest.

Lead Stories has addressed fake news published by Conservative Beaver in the past:

Further analysis of the Conservative Beaver website revealed that it has the same Google Adsense code as another website that quickly earned a reputation for fake news, TorontoToday.net. Lead Stories debunked these TorontoToday.net stories late in the summer of 2020. Currently the TorontoToday.net website is displaying a notice that the website was purportedly hacked. 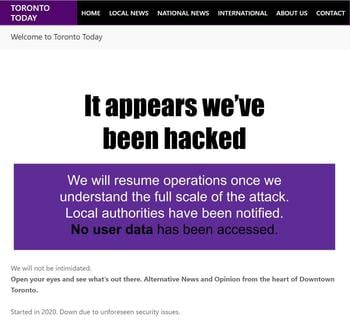 A story that Vladimir Putin's daughter died from the COVID-19 vaccine.
A story that California fire officials said the wildfires were coordinated arson.
A story that Chadwick Boseman had been poisoned.