Does a Yale Library have a fire-suppression system that, in a blaze, would leave anyone caught in the building to die without oxygen while rare books would be protected? No, that's not true: The Beinecke Rare Book and Manuscript Library does have a fire-suppression system designed to protect the precious books from fire -- but not at the expense of human lives. In 2010, the head of access services at the library, Stephen Jones, said that a combination of halon and Inergen gases could be pumped into the stacks to stop the combustion process, and thus stop the spread of fire.

The claim originated from a November 12, 2018, retweet. Within about an hour, that had been followed up with a correction, but the original retweet was left up. Now, years later, that false claim has resurfaced as a screenshot on Facebook, in a post (archived here) where it was published on February 7, 2021. Captioning of the original Tweet shows in the screenshot, "This library at Yale is basically the dream" with photos of the library. That was retweeted with this "Fun Fact" in reply:

Fun fact about this library: if a fire starts in the library, all the oxygen leaves the building killing all who are inside in order to protect the rare books

Below is a screenshot showing this November 12, 2018, tweet in a broader context. The first retweet with the "fun fact" was sent at 6:56 p.m. that day but by 8:10 p.m. another tweet offered additional information and a link to a story in the Yale Daily News:

Okay so it's not enough to kill you, but it's nice to know that so many of you are willing to die to save books https://yaledailynews.com/blog/2010/02/04/myths-abound-about-beinecke/ 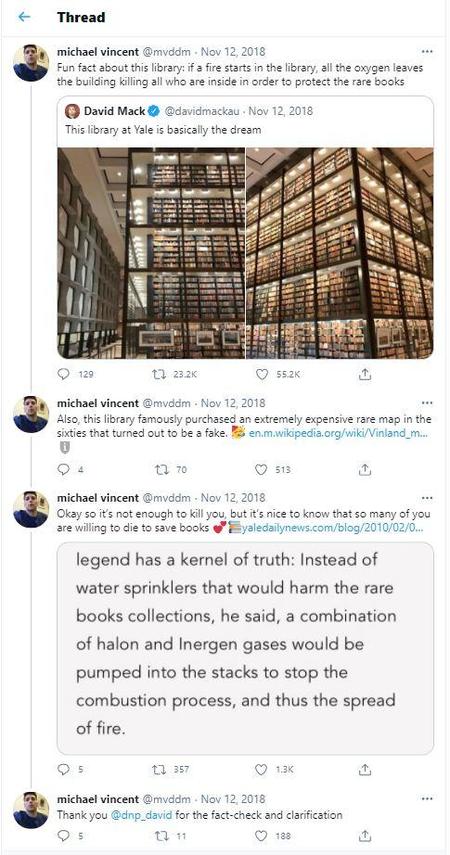 The article from the Yale Daily News from February 4, 2010, was titled, "Myths abound about Beinecke," and offered responses to four widespread rumors answered by Jones, the head of access services at the Beinecke Library. The rumor addressed here was answered this way:

MYTH: The library's fire-extinguishing system removes the air from the book stacks in the event of a conflagration, dooming any librarians inside to a slow death by asphyxiation.

MOSTLY FALSE: According to Jones, this legend has a kernel of truth: Instead of water sprinklers that would harm the rare books collections, he said, a combination of halon and Inergen gases would be pumped into the stacks to stop the combustion process, and thus the spread of fire.

"They do lower the percentage of oxygen, but not enough to kill any librarians," Jones said.

Inergen is a breathable gas fire-extinguishing agent that was patented in 1989 and is capable of taking the place of another fire-suppression gas, halon. In this PDF information file from Ansul Fire Protection, provided by the National Institute of Standards and Technology, the mechanism of Inergen's fire suppression as well as its safety for humans is explained:

A normal atmosphere contains 21% oxygen. Most combustibles will bum until the oxygen concentration has been reduced to less than 15% (4). MERGEN, when discharged into a hazard enclosure, will reduce the oxygen concentration to about 12.5% which is well below that required to support combustion or fire. A normal atmosphere will also contain 0.03% [email protected] When INERGEN is discharged into a hazard enclosure, the concentration is increased to about 4%.

The increased concentration results in increased respiration rates. This means that a person who is in that atmosphere will breath deeper and more frequently (5). This is the basic process by which a material such as INERGEN causes extinguishment of a fire while allowing persons to breath as they egress the hazard area. Thus INERGEN functions as both an extinguishing and inerting agent.

Halon was another gas compound that was discovered to possibly be harmful to the ozone layer and the manufacture of the gas began to be phased out in the late 1980s and early 1990s. Although the production of new halon was phased out, existing systems using halon could continue to be maintained and the halon recycled, but will eventually require a different system to replace the halon.