Will tanker trucks needed to take the place of the now-canceled Keystone XL pipeline have to burn the volume of fuel stated in various pro-pipeline memes? No, that's not true: There are several variables beyond the issue of arithmetic that are not addressed by these memes, but the numbers alone do not add up. For one thing, there is another less expensive and less wasteful means of transport than tanker trucks alone: rail. Especially as the oil market fluctuates, rail transport can pick up or slow down based on the market, whereas pipeline use is contractual at a set, usually long-term rate. So just because a pipeline was projected to be able to carry a certain capacity of oil daily does not mean that volume of oil now must be carried in tanker trucks.

The claim originated in a post (archived here) where it was published on January 31, 2021. The text of the meme reads:

Another meme with a similar theme stated:

Instead of 830,000 barrels of oil flowing down the Keystone XL daily...
Now they'll have to use 4,400 semi trucks or 1,300 trains cars to move it.
DAILY.
This was never about the environment, stop pretending it was. 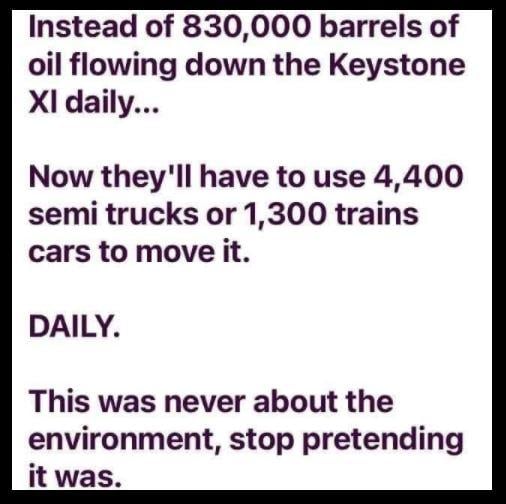 The second meme presents the problem as an either/or situation. Either build the pipeline and move 830,000 barrels of oil with the Keystone XL pipeline -- or move those barrels with tanker trucks or trains. The numbers of this meme seem to be rounded but fairly close to the presented hypothetical challenge of moving 830,000 barrels of oil per day. According to the U.S. Energy Information Administration, a rail tanker holds about 700 bbl (bbl = barrels, 1 bbl = 42 gallons). This would require 1,186 tanker train cars (the meme suggests 1,300) to hold and transport the projected 830,000 bbl of crude oil a day.

A key understanding that is not presented by these memes is outlined in an article from oilsandsmagazine.com titled, "Ten Reasons Why Keystone XL Doesn't Matter So Much Any More." This article was published the week of President Biden's executive order revoking the Keystone XL permit. It is explained that other pipelines are being expanded as well as the system to export Canadian oil by rail. This chart below shows that by the time the Keystone XL expansion was ready to go, there will already be other means of moving that volume of oil. The chart's information is summarized:

By 2023, when KXL was due to come online, there will be plenty of pipeline space. Assuming a 3% crude production growth rate, which is highly optimistic, more capacity won't be needed in this decade. 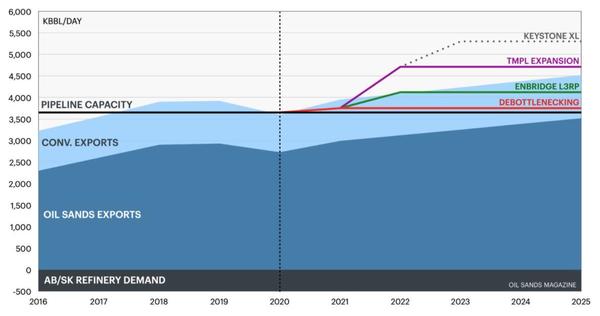 On January 20, 2021, his first day in office, President Biden signed the, "Executive Order on Protecting Public Health and the Environment and Restoring Science to Tackle the Climate Crisis." Section six of this executive order focused on, "Revoking the March 2019 Permit for the Keystone XL Pipeline." It says in part:

b. In 2015, following an exhaustive review, the Department of State and the President determined that approving the proposed Keystone XL pipeline would not serve the U.S. national interest. That analysis, in addition to concluding that the significance of the proposed pipeline for our energy security and economy is limited, stressed that the United States must prioritize the development of a clean energy economy, which will in turn create good jobs. The analysis further concluded that approval of the proposed pipeline would undermine U.S. climate leadership by undercutting the credibility and influence of the United States in urging other countries to take ambitious climate action.

Below is a map of the existing Keystone pipeline system with the path of the proposed, now canceled, 1,200-mile-long Keystone XL shown as a dotted line. View the full map on the Keystone XL website (here) 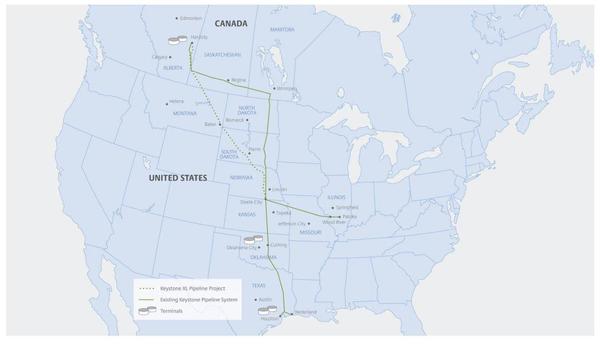 One of the memes offers 2,687 miles as the distance that tanker trucks would have to travel, as if the entire Keystone pipeline system had been shut down and needs to be replaced with tanker trucks. This is either a meme-maker's misunderstanding, or an intentional misrepresentation of the pipeline issue. There exists already 2,687 miles of Keystone pipeline that is moving approximately 590,000 barrels of Canadian crude oil to refineries in the USA daily, and Keystone's system is not the only pipeline carrying oil from Canada to the USA. The executive order did not shut down or limit the existing Keystone pipeline, so there is no reason to calculate the fossil fuel cost of moving those barrels of oil 2,687 miles, the length of an existing and functioning pipeline, over the road in tanker trucks.

Below is a 2020 map of pipelines that already exist, which move crude oil from Canada to the USA. View the full map on the website of the Canadian Association of Petroleum Producers (here). 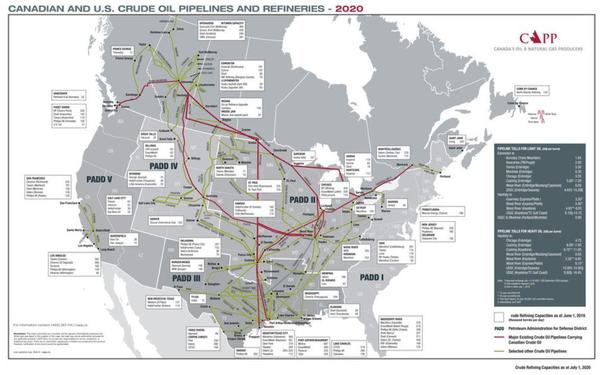 There are many rail systems in Canada and the USA that can transport crude oil. Below is a map from the website priceofoil.org 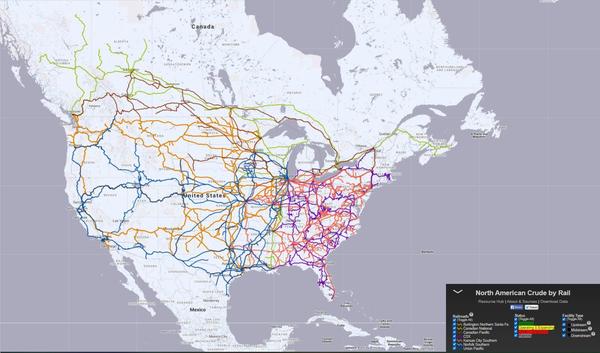 The Keystone XL Pipeline project was an expansion of the already existing and still functioning pipeline. That expansion would add another 1,200 miles of pipeline into the system, and was projected to be able to move 830,000 barrels a day. The meme offers a tanker truck capacity of 8,000 gallons (reference.com says the industry standard is 210 bbl or about 8,800 gallons, so this number is very close) At 8,000 gallons, the tanker would be hauling 190.476 bbl, and this would require 4,357 tanker trucks to move 830,000 bbl/day. But the Keystone XL pipeline was not 2687 miles long, it was only slated to be 1,200 miles long.

According to a chart from the U.S. Department of Energy, the average mileage for a class 8 Truck is 5.29 miles per gallon.