Did 9,000 "illegals" enter the United States in all of 2020 versus 108,000 in the first three months of 2021? No, that's not true: The Department of Homeland Security, U.S. Customs and Border Protection confirmed to Lead Stories the agency's numbers are vastly different from those in a posted claim. In the 2020 calendar year 547,816 people were apprehended entering the U.S. illegally and in 2021 so far there have been 178,883 apprehensions.

The post cites no source and gives no explanation for the numbers it puts forth, which suggest a ten-fold increase in illegal border crossings.

Roger Maier, public affairs specialist in the Office of Public Affairs for U.S. Customs and Border Protection, confirmed to Lead Stories via email on March 15, 2021, that the numbers on the agency's website reflect the accurate numbers of people apprehended crossing the border illegally. Those data don't show a ten-fold increase in 2021, compared to past years, although they do show an increase of roughly 30% over first-quarter crossings in 2020.

CBP counts a fiscal year (FY) from October 1 to September 30. The graph breaks down the monthly numbers and each month is " independently reported/not cumulative," Maier explained.

The graph notes the following number of Border Patrol Apprehensions: 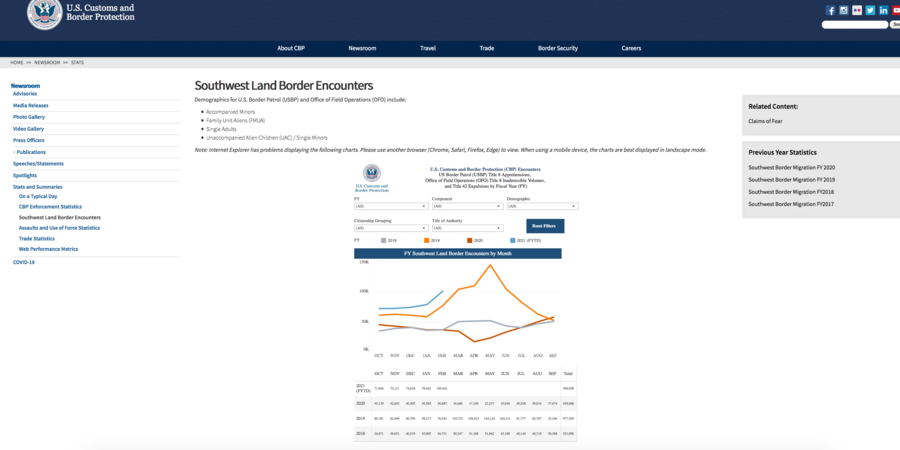 This is a close-up of the numbers reflected in the graph: 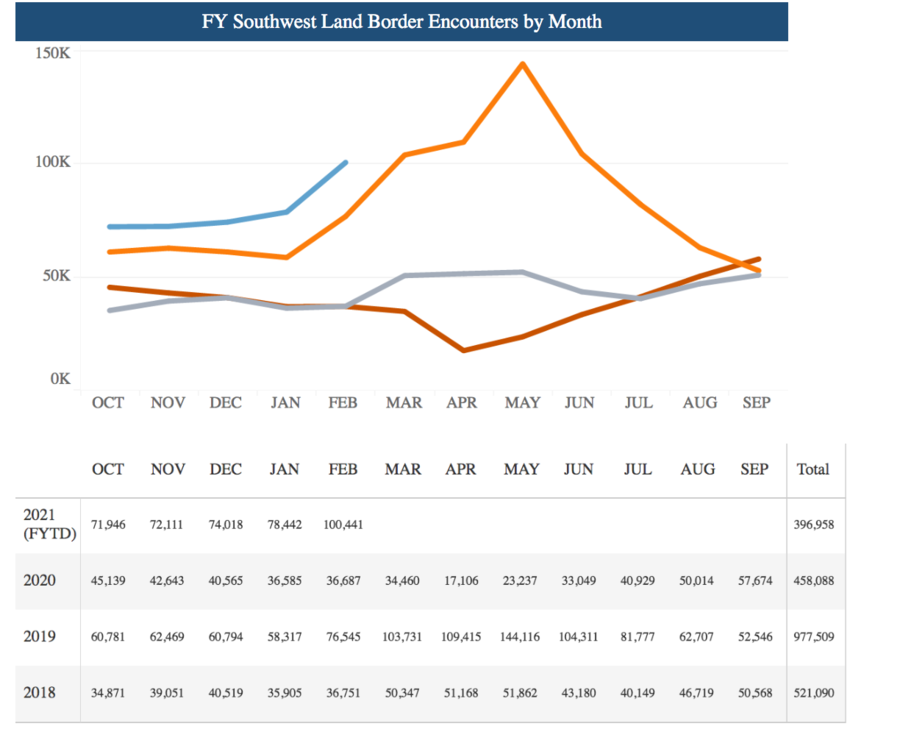 Denise Gilman, director of the Immigration Clinic at the University of Texas at Austin School of Law, told Lead Stories via telephone on March 17, 2021, that the 9,000 and 108,000 numbers in the social media post are incorrect. She cited the U.S. Customs and Border Patrol website information as an accurate count for the number of people entering the country illegally. Gilman explained that apprehensions is the statistic by which experts track the number of people illegally entering the United States:

Gilman also told Lead Stories that the border policy has not changed since the Biden administration took charge of the agencies that patrol the U.S.- Mexico border. "There has been absolutely no change in the ability of an individual to cross without apprehension."