Did a laboratory analysis commissioned by a German children's charity find bacteria and mold on a mask? Yes, that is true, but it does not mean these microorganisms are harmful or abnormal. According to experts, it is likely that the bacteria found on the mask are just the regular bacteria found on the skin and in the mouth. Without further analysis of what kind of microorganisms were present on the mask, it is impossible to determine whether any of them are harmful. If worn properly and changed or laundered regularly, masks are safe for both children and adults.

The claim appeared in an Instagram post (archived here) where it was published on March 1, 2021. The post contained two images of petri dishes showing some sort of microbial growth and a scan of a laboratory report written in German. The posted image also contained a screenshot of a Twitter post made by HealthFreedomIreland on September 20, 2020, which read:

A German children's charity has commissioned a laboratory to examine a commercially avalailable mask. The face mask was previously worn by a child in school for 8 hours. Examination findings: Detection of 82 bacterial colonies and 4 mold colonies !! 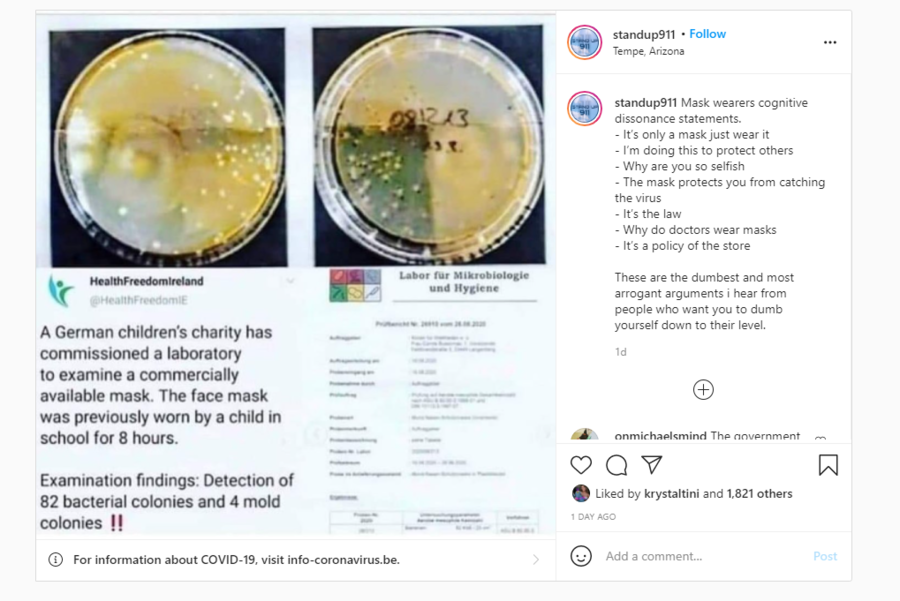 Originally, the laboratory analysis shown in this post was commissioned by a small German children's charity called Kinder für Weltfrieden e.V. ("Kids for World Peace") in August 2020. The German laboratory in charge of the analysis provides services such as microbial analyses of drinking water, food and cosmetic items as well as rapid testing for COVID-19.

The laboratory report was originally shared on the charity's Facebook page on September 13, 2020, but has since been taken down. According to the edited German-language post, the authorization to share the analysis had been revoked after a user had only shared an image without further context. It can, however, still be accessed on Twitter:

The German-language laboratory report dated August 26, 2020, contains the following information on the analysis: the report contains a code that indicates the laboratory performed what is called an aerobic plate count of the inside of a standard surgical mask provided by the client, a representative of Kinder für Weltfrieden. The inside of the mask was pressed against a petri dish containing a nutrient solution and incubated for a certain amount of time. All viable microorganisms -- the method will detect bacteria, yeasts and mold fungi -- found on the sample formed visible colonies which were counted to get an impression of how many microorganisms were present on the item. The end result of an aerobic plate count is usually given as CFU, or colony-forming units. In this case, the analysis found 82 bacterial, 0 yeast and 4 fungal CFU/25 cm2 (about 3.8 in2). This corresponds to the information presented in the Instagram post.

Unfortunately, the analysis contains very little information on the mask itself and how it had been handled previous to the analysis. The document only states that it was a surgical mask provided by the charity and delivered to the laboratory in a plastic bag. A German-language comment on the charity's original Facebook post left on September 15, 2020, specified that it had been worn to school from 8 a.m. to 3:30 p.m. and taken off briefly during breaks. Lead Stories has reached out to both the laboratory and Kinder für Weltfrieden e.V. and will update this post with further information if they respond.

While the laboratory analysis does indeed show the presence of bacteria and mold on the mask, these results do not necessarily indicate the presence of harmful pathogens. Lead Stories reached out to the American College of Chest Physicians for comment and received the following statement from Dr. Ryan Maves, one of the physicians on the CHEST Covid-19 Task Force, via email on March 4, 2021:

Human skin, nasal passages, and mouths are all supposed to have bacteria in and on them. This is normal and healthy. Discovering bacteria on a mask that has been on the face of a child all day has no relationship to whether or not masks are harmful.

Maves also noted that nothing cultured showed to be out of the ordinary for everyday human contact, and the colony counts described seem fairly low after several hours on a child's face.

It is also important to note the fact that a mask does have close contact to noses and mouths and does pick up particles in the air is the exact reason why disposable masks should be disposed of and washable ones cleaned regularly per CDC recommendations.
Another expert, Dr. Patrick Grant, associate professor of biomedical science at Florida Atlantic University, told Lead Stories in an email from March 4, 2021:

The numbers of recovered microorganisms from the facemask (assuming that it is taken from the inside of the mask) is not unexpected after wearing a cloth mask for a day based on our studies. I note that there were zero yeast detected. There is no ability to judge whether the bacteria and mold that grew present any health hazard from this study. It most likely represents what is considered to be the natural flora of the mouth and skin, referred to as our microbiome, transferred to the mask. Contrary to the assumption portrayed in this post, many such microorganisms are considered beneficial for human health [...].

The CDC recommends changing masks that are wet or dirty and to regularly wash and dry resuable cloth masks.
Lead Stories has collected here its reporting on the safety of masks for children and adults. (archived here)