Is Donald Trump the "real" president, does Joe Biden not fly on Air Force One, does hydroxychloroquine "fix" COVID-19 and do masks not stop the spread of coronavirus? No, that's not true: Biden won the election and became President of the United States at 12:01 on January 20, 2021, per the U.S. Constitution. Trump is no longer the president and is not in charge of the United States military. Biden has flown on Air Force One multiple times since getting elected, per official records from The White House and arrival photos. Experts and studies have shown that hydroxychloroquine does not "fix" COVID-19 and the CDC published a study in February 2021 that masks do limit the spread of coronavirus.

????Get The Best VPN For 50% Off Today! Click Here https://www.virtualshield.com/x22 Make Yourself Anonymous Online!! ????️????️ The [DS]/MSM has fallen right into the patriots trap. They believe they are prot

????Get The Best VPN For 50% Off Today! Click Here https://www.virtualshield.com/x22 Make Yourself Anonymous Online!! ????️????️ The [DS]/MSM has fallen right into the patriots trap. They believe they are prot

X22 Report is an online outlet that describes themselves as:

The X22 Report is a daily show reporting on the economy as well as the political and geo-political climate. We use research and source all of our documentation to bring you the facts in an environment where mainstream media offers opinions without proof."

The video peddles several conspiracy theories that Lead Stories has previously debunked. Here are some of the unsubstantiated theories:

1- Trump Is the "real" President

4 - Masks do NOT stop COVID-19 transmission

Claim: Trump Is The Real President

The video claims National Guard members are stationed outside the United States Capitol building because the "Deepstate, mainstream media" and political enemies are in a panic, so corrupt politicians have kept the National Guard in the capital and kept fences around the building.

The warning is that the "corrupt" politicians believe there will be "an attack by 'Q' or 'QAnon,'" because "they don't know what Trump is going to do. They don't know what his plan is. They believe if they keep the fences up and keep the National Guard in place they have a force that can go up against anything that Trump throws at them."

For example, if Trump decided, because he is the real president, if he decided to use the military to go after these corrupt individuals they would use the National Guard to fight them off. This is why they're in place right now."

Trump is not the "real president" and the National Guard was called in after thousands of people stormed the Capitol on January 6, 2021, trying to stop the certification of the election of Biden. They failed, as the Washington Post and dozens of other on-the-scene outlets detailed in reports on the day of the attack.

QAnon followers circulate the conspiracy theory that Trump is still president and is in control of the military. The idea is that Trump is fighting an evil international cabal of democratic politicians, Hollywood elites and pedophiles who are involved in an international sex trafficking ring that abuses children. And purportedly he is still president; therefore, still in charge of the military.

Lead Stories debunked a claim that Trump is in control of the military, which relied on incorrect interpretation of the "Presidential Transition Enhancement Act of 2019." That bill arranges temporary office space and staff briefings and says nothing about a former president retaining control of the military once he leaves office.

Claim: Biden's Flights Are Not On 'Air Force One' Because He Is Not President

The video claims that since Biden is not the real president, his aircraft cannot be designated Air Force One, the official plane of the president. From the video:

That is a misunderstanding of what a "call sign" for Air Force One is. According to Military.com, any U.S. Air Force aircraft the president is aboard has the "radio call sign" Air Force One:

The presidential air transport fleet consists of two specially configured Boeing 747-200B's -- tail numbers 28000 and 29000 -- with the Air Force designation VC-25. When the president is aboard either aircraft, or any Air Force aircraft, the radio call sign is "Air Force One."

Biden has, as of the time this was written, flown on five occasions aboard two different aircraft that were designated Air Force One. He has flown to Michigan, Wisconsin, Texas, and Delaware twice.

The White House Press Pool noted he was aboard AF1 in emails obtained by Lead Stories.

The Bidens boarded Air Force One at 5:44 pm. The president turned back, saluted and then waved before they entered.

Air Force One was wheels up at 3:27 p.m. We landed at the Delaware Air National Guard Base at 3:51 p.m. The president and first lady got off AF1 at 3:58 p.m. They stopped to speak to the greeter and got in the SUV a moment later. Pool has not been provided additional scheduling updates. Rolling shortly ... 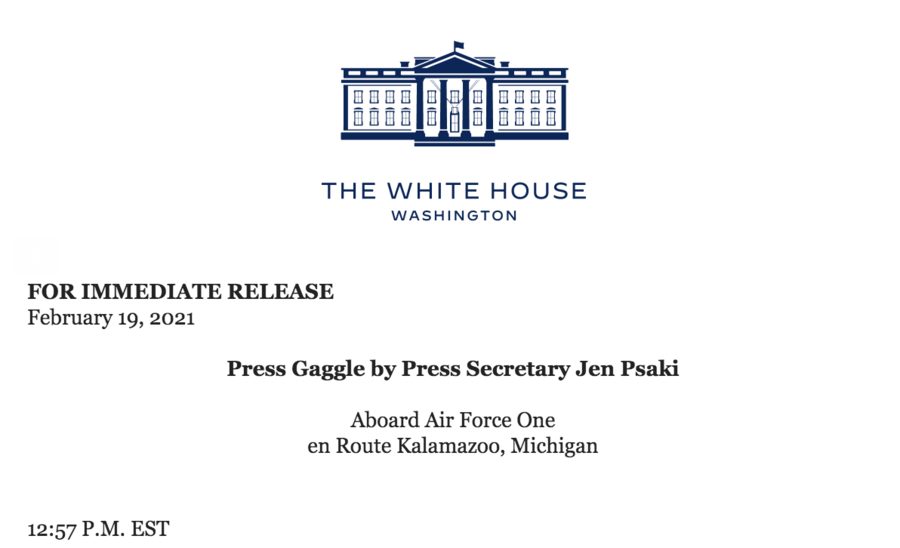 The video also asserts Biden's flight on a private plane to the inauguration on January 20, 2021 "tells you everything you need to know."

The Trump administration did not offer Biden a plane from Delaware for the inauguration, CNN reported.

The U.S. Food & Drug Administration in June, 2020 withdrew authorization for use of hydroxychloroquine against COVID-19 and has not changed its position as of the time this was written.

Lead Stories' reporting on claims about the effectiveness of hydroxychloroquine is at this link.

The video claims "we've seen tons of studies that show masks do not stop the virus particles," referring to COVID-19, and claims the CDC "came out with that study." A study released on the CDC website on February 10, 2021, says the opposite. Titled, Maximizing Fit for Cloth and Medical Procedure Masks to Improve Performance and Reduce SARS-CoV-2 Transmission and Exposure, 2021, the study states:

Wearing a mask that fits tightly to your face can help limit the spread of the virus that causes COVID-19.

Lead Stories previously debunked the claim that masks do not prevent the spread of coronavirus and has collected here its reporting on claims about the effectiveness of masks in preventing the spread of COVID-19.