Did "Black Lives Matter and Antifa" set fire to a Catholic church in Minneapolis? No, there is no evidence the historic church was set ablaze by protesters or activists in the same city where the Derek Chauvin murder trial was taking place.

A fire broke out at the Sacred Heart of Jesus Polish National Catholic Church on April 19, 2021, at about 7 p.m. local time. The location was nearly 3 miles away from the downtown area where the protesters were. There is no evidence that the blaze was set by anyone, including by protesters. The investigation has so far not been deemed arson, the Minneapolis Police Department told Lead Stories.

A preview for what is to come after the Chauvin verdict. Not even churches are safe from the mob in Minneapolis. Sickening. @evankilgore 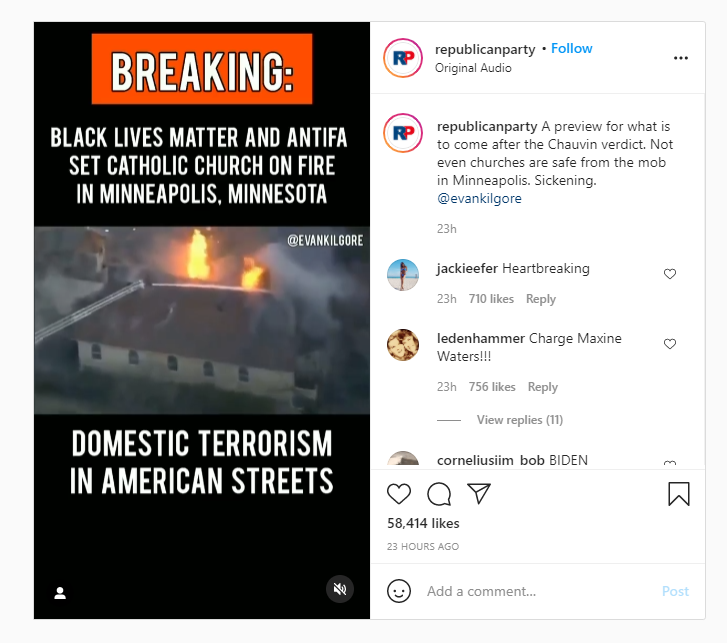 "There are no indications that the fire is associated with any civil unrest at this time," said Melanie Rucker, assistant chief of administration and the public information officer for the Minneapolis Fire Department, according to The Catholic Spirit, the official publication of the Archdiocese of St. Paul and Minneapolis.

A GoFundMe set up by the church made no mention of arson.

"Every fire in Minneapolis has it's origin investigated. At this time we are not deeming the fire to be arson, nor are we naming any groups as suspects," John Elder, director of police information, Minneapolis Police Department, told Lead Stories via email on April 21, 2021.

According to KSTP-TV reporter Ryan Raiche, who was at the scene of the fire, the church is approximately a 13-minute drive between the two locations.

To be clear: this is a 13 minute drive from that protest downtown. There is no indication this was intentionally set. Chair of church just told me he thinks it may have started near furnace. It's a 105 year old church.

Priest consoling members of the church. AGAIN: There is no indication this has anything to do with the unrest. pic.twitter.com/8mac8Iu3LE

Fox 9 reported that protesters were marching in downtown Minneapolis on April 19, 2021, not near the church.

The Bureau of Alcohol, Tobacco, Firearms and Explosives responded to the scene and is investigating the fire, as is standard procedure for incidents at houses of worship, wrote Ashlee J.L. Sherrill, St. Paul Field Division public information officer, in an email to Lead Stories on April 21, 2021.

The Minneapolis Fire Department posted a series of tweets about the fire and made no mention of protesters being in the vicinity of the church.

Structure Fire - Crews have lines laid to a 2-story church with a large steeple on the 2200 block of 5th St. NE. They have heavy fire showing from the rear and in the cockloft of the building.

Lead Stories has reached out to the Minneapolis Fire Department for comment and will update the story when one is received.