The claim appeared in an article published by GreatReject.org -- a website that asserts "There are no conspiracy theories, they are all true" -- on March 24, 2021, titled "Government of Norway indicted for crimes against humanity" (archived here). The indictment is part of a supposed "2nd Nuremberg Tribunal." The article continues:

And now good news from Norway:

Here is how users on social media would have seen the title, description and thumbnail of the article:

Government of Norway indicted for crimes against humanity

Norway - Investigators conduct investigations, in collaboration with lawyers and advocates. The 2nd Nuremberg Tribunal is a fact.

In an email to Lead Stories on April 9, 2021, the Section for Humanitarian and Criminal Law of the Legal Affairs Department in Norway's Ministry of Foreign Affairs did not have any information about an indictment:

The Norwegian Government has no information on the issue you raise beyond what appears from the online article which you refer to, according to which a Norwegian citizen may have submitted a criminal complaint, which every citizen in Norway is free to do.

Asked whether the government would know about such an indictment, the Legal Affairs Department replied:

Yes, we assume that such circumstance would be known.

A 53-page document by "a group of researchers from Norway" entitled "COVID19 A PLANNED PANDEMIC AND A CRIME AGAINST HUMANITY" and dated March 15, 2021 is linked to at the bottom of the GreatReject article. The document makes no mention of a specific lawsuit against the Norwegian government. The only mentions of a lawsuit refer to a supposed international, class-action PCR test lawsuit spearheaded by German lawyer Reiner Fuellmich (who the article states is the head of the "2nd Nuremberg Tribunal"). Lead Stories reached out to Fuellmich for comment on his involvement in the Nuremberg effort and will update this story if we receive a response.

No official individual or organization is credited as the author of the 53-page document, although on page 40, the following message appears: 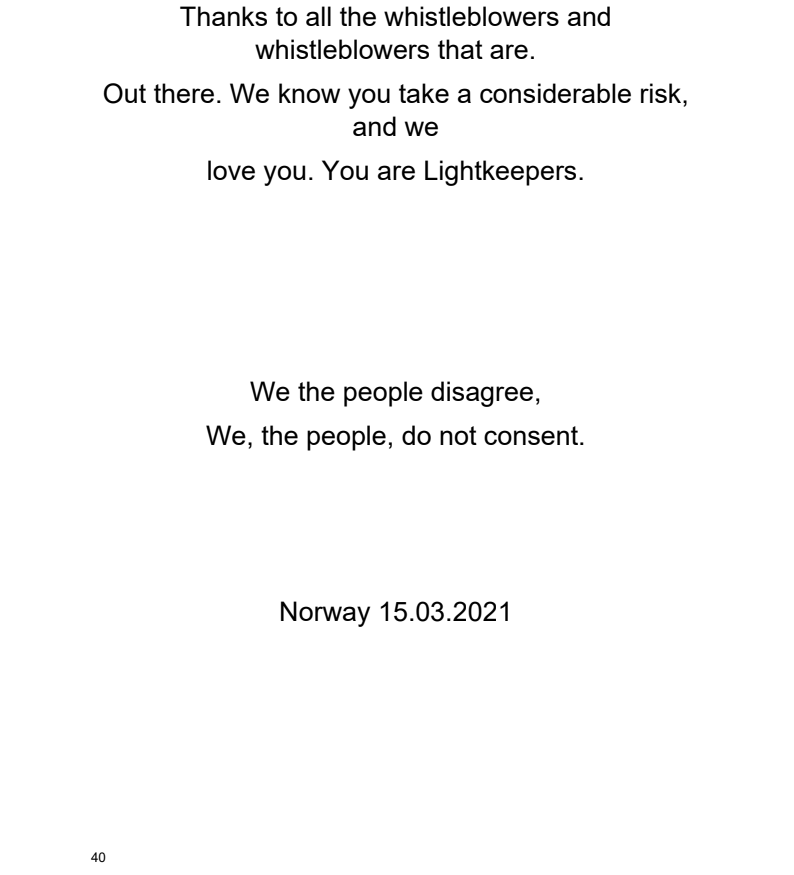 The separate Norwegian report is authored by Kenneth Otterlei, a Norwegian citizen. Lead Stories has created a link to Lead Stories DocumentCloud account folder for the report here (in its original Norwegian). That way, readers can avoid any malware that may result from clicking the link to the report in the GreatRejectarticle, which consumer web browsers flagged as a potential computer virus infection site. In an English translation of the report contained in the article, Otterlei echoes claims the Norwegian government has violated the Nuremberg Code and the rules of the International Criminal Court (The Hague) because its novel coronavirus policy is a violation of "basic human rights." He also claims that through its novel coronavirus policy, the government violates its own laws:

Our Government violates several laws in the "Penal Code Chapter 17. Protection of Norway's independence and
other fundamental national interests", by knowingly and willfully initiating a false
pandemic with the consequences this has for people, mental health, health care, human beings
rights as well as the relinquishment of sovereignty to foreign power as a final objective.
(Treason).

Otterlei only cites excerpts of Norwegian law and mentions of "evidence" in the previously mentioned 53-page document as justification of his claims.

Lead Stories contacted the Møre og Romsdal police district in Norway, which contains the Ålesund police station, for confirmation that the 53-page document and Otterlei's report were actually sent to the station and if any resulting action occurred. As of April 9, 2021, there has been no response.

However, he said at the 50 minute 45-second mark that attorneys around the world are hoping to submit complaints to the International Criminal Court about novel coronavirus matters in various countries. He does not mention Norway.