Did protesters at a governing board meeting for the Vail Unified School District in Arizona elect a new school board and legally vote for the district's mask policy to be lifted? No, that's not true: While the protestors did stage what appeared to be an impromptu election for a new school board on April 27, 2021, their election was not legally binding.

The claim appeared on several social media platforms including Facebook, where it was posted (archived here) by the fan page Donald Trump Fan Club on April 28, 2021. The post included a screenshot of a tweet from April 27, 2021, that read:

WOW. Parents in Vail, Arizona just took over the school board - all according to the rules. Voted in a whole new board, and immediately removed the mask mandate. Democracy in action! Just Amazing!

A video of the impromptu election showed a large gathering of what appeared to be parents in a building lobby. The voice of the person recording the protest asked other attendees if they wanted to elect new school board members because the school board members who were legally elected had resigned, which was not true. The protesters then held their own election, using Robert's Rules of Order. However, a strict following of those parliamentary rules would have required an elected presiding officer or chair to facilitate the election.

Following the election, the "new" school board voted to get rid of the school district's face covering regulation, which, as of the date of the protest, required all students and staff to wear a face cover when on school district property. Gov. Doug Ducey of Arizona lifted the statewide mask mandate for K-12 schools on April 19, 2021, although K-12 school districts and charter schools throughout the state still have the right to enforce mask use.

In a phone call with Lead Stories on April 29, 2021, Darcy Mentone, director of communications and public affairs for the Vail Unified School District, said the protestors' impromptu election was not official. The protesters did not interrupt the governing board meeting scheduled for 7 p.m. MDT that night, she said. Instead, they came during a study session that preceded the meeting.

And the legally elected school board members did not resign, Mentone said: Rather, they adjourned the study session for their safety. The governing board meeting was canceled due to the protests. These were just a few of the reasons the protesters who claimed to be "elected" to the "new" school board could not have replaced the school district's face covering regulation, she said:

In a board meeting, something has to be listed on the agenda as an action item for the board to take any action. So the mitigation strategies were listed on the agenda for the meeting that got canceled, but it was just an inform item so that the board could discuss it and listen to the parents that we knew were coming and had concerns ... even if that board meeting would have gone through, the board would not have had the ability that night to change the mask policy. So it is still in place, nothing has changed.

Mentone also cited rules for the state's school board elections:

School board elections are part of the general election in even-numbered years. Special elections to fill unanticipated vacancies occurring between regular elections may be called by the county superintendent of schools. Or a county school superintendent may also choose to appoint an individual to fill such a vacancy. Primary elections do not pertain to the election of school board members.

The names of school board candidates are printed in the non-partisan section of the ballot. Voters in the school district elect their school board members.

After the protests, John Carruth, superintendent of the school district, emailed district parents. A screenshot of the email, forwarded to Lead Stories by Mentone, is below: 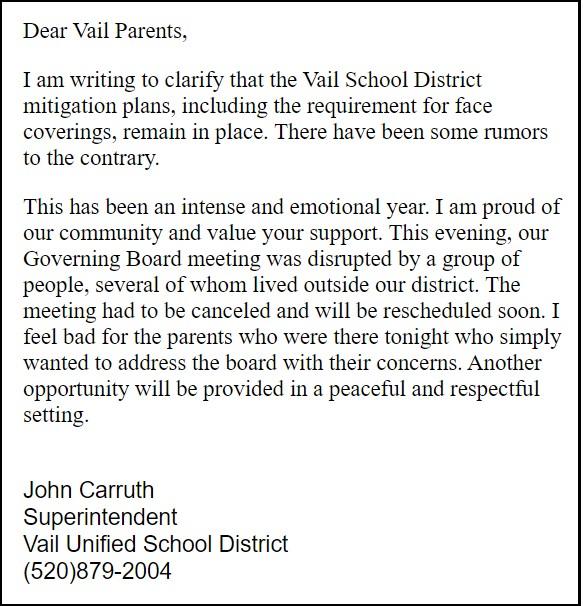 Although Carruth's claim that many of the protestors were not within the boundaries of the school district was echoed by Mentone, Lead Stories could not independently confirm whether that was true.