Did several Malaysians film a giant UFO hovering over a village? No, that's not true: The UFO featured in this video clip was the creation of filmmaker Damien White. Extensive footage of this UFO, including 3-D wireframes from the early stages of the CGI animation, were posted to White's YouTube channel in 2007. This fictional CGI short film was originally titled as if set in Los Roques, Venezuela. In September 2016 the CGI UFO went viral, this time circulated by an unidentified prankster, the "UFO sighting" labeled as being in Kuala Krai, Malaysia.

This claim resurfaced in an article (archived here) published by factleaks.net on October 10, 2020, under the title "Several Malaysians filmed a giant UFO hovering over a village (Video)." It opened:

An extremely bizarre event took place in Malaysia, a huge UFO was filmed by locals while hovering over a village in the Kuala Krai district.

The villagers were amazed when they saw this UFO, the UFO made some maneuvers to avoid the trees in that area.

Shortly after this bizarre filming was made public, it went viral in Malaysia but police said the filming was nothing more than video editing and a prank. This UFO is strikingly similar to the UFOs in the movie "Independence Day". 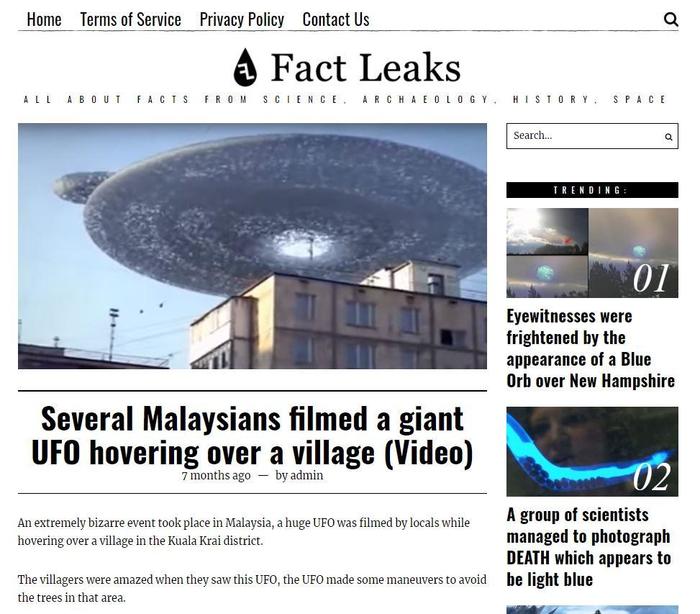 The article in factleaks.net notes that Malaysian police declared the footage was just a prank done with video editing. It does not mention that it was 2016 when Malaysian police addressed this viral hoax. The timing of that CGI footage going viral in Malaysia on September 1, 2016, right after Malaysian Independence Day on August 31, points to a prankster making a reference to the 1996 film, "Independence Day," about a hostile alien takeover.

The viral UFO video was falsely attributed to Bernama, the Malaysian National News Agency. In a September 1, 2016, article issued by Bernama, titled "Police rubbish UFO 'sighting' in Kuala Krai," the fact that no one from Kuala Krai reported seeing the UFO is addressed by the local police chief:

"The video was circulated by certain parties," he said when contacted in Kota Baru last night.

When Damien White originally posted his CGI-created "Los Roques Mini Series" films to his YouTube channel "Manbird12000" in August 2007, some videos were designed with added details to make the story appear real. One video finished with captioning that requested tips from the public on the source of the UFO footage and a contact email "for missing person info." White did not continue to play up a hoax narrative around his CGI UFO videos. He is forthcoming about his CGI techniques to people commenting on the series.

In 2014 White was promoting an indie sci-fi film project called "The Great Dark." When the Malaysia hoax happened using his UFO animation, White posted a notice on the video using a second account. He wrote:

Manbird12000 here: apparently, this video has been posted by someone in Malaysia under the guise that this is an actual sighting, and it has gone viral. This video was admittedly for entertainment purposes only. Sorry to the people of Malaysia.