Did a Moderna "representative" make a "HORRIFIC admission" about the COVID-19 vaccine in a recorded phone call featured on "The Stew Peters Show"? No, that's not true: The relationship with Moderna of the person whose voice was recorded -- and the extent of that person's knowledge of Moderna -- is unknown. As is the case with many companies, the person on a "customer care" line could be a company employee, or could be a contract worker in a call center or working from home. Whatever the case, his words were intentionally distorted, cut off and misrepresented. The headline's claim of a "horrific admission" does not match the content of the recording.

In a shocking recorded phone call between a jab victim and a representative of Moderna, the agent of the pharmaceutical company admitted that EVERYONE that subjects themselves to the shot in the arm is part of the experiment. 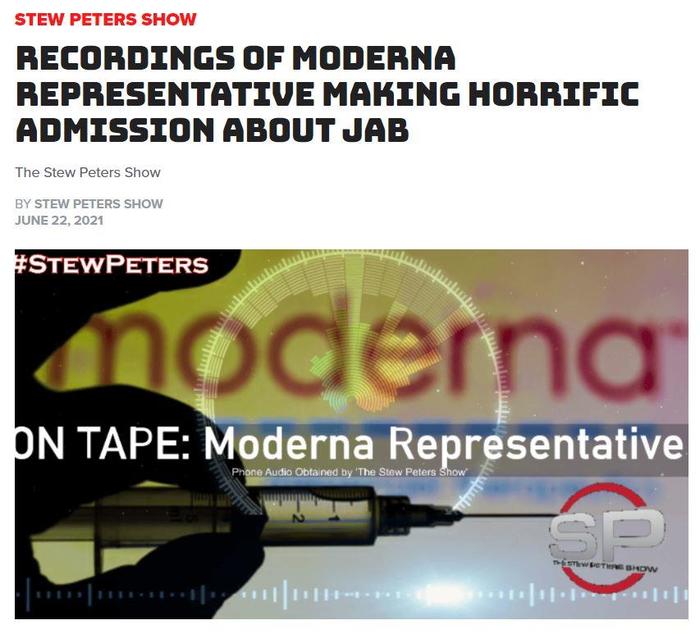 While the episode contains many claims, this fact check is addressing only the particular claims pertaining to the recorded phone call placed by Brittany Galvin, who has been a guest on the show several times, to Moderna's Customer Care line.

At about five minutes 40 seconds into the video, Peters quickly reviews Galvin's case: She claims to have been diagnosed with Guillain-Barre Syndrome by a neurologist. She also says she has become magnetized. Peters says the aim of Galvin's call was to report her experience directly to Moderna. The recording of the phone call begins with the automated scripted greeting of the Moderna Customer Care line. Peters says there was a disconnection, and a representative (identified only as "Gilbert") calls Galvin back.

A piece of this conversation is missing, and the audience never hears Galvin describe the reason for her call or what problems she is experiencing. The call begins with Gilbert requesting the vaccine lot numbers recorded on Galvin's vaccination card.

It is not clear whether Gilbert knew the call was being recorded by the person calling.

At seven minutes 26 seconds into the video Galvin begins asking Gilbert questions. She asks him three questions in a row:

So what happens after this? I mean what if; have you guys seen a, seen a lot of this? Like, what, what's gonna happen?

Gilbert then makes a drawn-out "Yeah" sound at the start of his sentence: His "yeah" does not sound like an affirmative answer to her questions but a signal that he heard her and was going to try to speak. At this, Peters cuts back to himself and breaks it down for his audience:

So, the Moderna rep clearly says that they have seen these reactions! He doesn't seem surprised by any of her symptoms or her diagnosis -- that's shocking! But not as shocking as the admission that he made next.

Galvin then asks if there have been any cases of Guillain-Barre Syndrome reported to Moderna and Pfizer. She mentions her own case plus two more she knows about in just one hospital. Before Gilbert can answer, she doubles up on questions again:

The vaccines are still in clinical trials, right? So doesn't this information help?

These last two questions have different answers, Yes, the clinical trial is ongoing. And, yes, information about adverse reactions is important and helpful -- but this information is not part of the clinical trial. The clinical trials, which enrolled about 30,000 people under controlled conditions, are ongoing and patients cannot add themselves to the data. Clinicaltrials.gov lists the recruitment status of the trial as: active, not recruiting. Gilbert does not describe the design of the trials. He says:

At this point Gilbert takes a step back and explains he has to read a disclaimer from Moderna and the FDA. This disclaimer text can be found on the Clinical Trial Data page on the Moderna website:

Gilbert reads on at nine minutes 40 seconds (Lead Stories was unable to locate this exact text on the Moderna website, although partial matches do exist):

Regarding the clinical trials so OK, um, so there's uh, clinical trials that are ongoing actually. So this is uh, all the clinical trials are still ongoing. The long-term protective efficacy of the Moderna COVID-19 vaccine is currently unknown. Uh, it is therefore not known whether a vaccine recipient who is exposed to the virus causes, the virus that causes COVID-19 will get mildly ill or have no symptoms. Results of the ongoing phase 3 study show that there are no cases of severe COVID-19 infection among participants who received the Moderna COVID-19 vaccine compared with 30 cases among those who received the placebo -- which is no vaccine.

At 10 minutes 33 seconds, Galvin misinterprets this and asks Gilbert to clarify:

So only 30 people got that placebo?

That is not what Gilbert read. Compared with none of the people in the study who were vaccinated, 30 people who got the placebo wound up coming down with COVID-19. The study had about 30,000 participants and the ratio was 1:1, So there were about 15,000 people in the placebo group, 30 of whom came down with COVID-19. At this point Gilbert seems flustered and has trouble answering:

Uh, in the phase 3 yeah, so there's, in three phases they're all ongoing, uh because uhhh, basically the people that got it, the first dose, they're still like looking at the long-term effects of it, so they can't really say the trials is done necessarily.

Peters cuts off the playback of the call and summarizes this exchange: Now Gilbert, the flustered customer service representative, is "the company." Peters claims that Gilbert laughed at Galvin and plays back Gilbert's flustered utterances twice, but Gilbert never laughs or chuckles.

Not only that but he laughed at the victim!

She specifically told him that she couldn't walk. She doesn't know that she'll ever walk again. She illustrated to him that she is living in hell and he chuckled! This is sick! This is premeditated murder. They know exactly what's happening to people being injected with their poison and they just don't care. Fact check that.

It is a misrepresentation for Peters to say, "The company has now admitted on the record that everyone that subjects themselves to their jab is part of a trial, is part of an experiment," just because the customer service employee was unable to counter Galvin's unusual and rapid-fire line of questioning that took him off the prepared script. He was not able to correct the false statement that Galvin introduced again and again into the phone conversation she was recording -- that every vaccinated person is part of the clinical trial.

Lead Stories reached out to Moderna's media contact by email for comment and will update as appropriate if we receive a reply.