Did a Muslim fan of the K-Pop boy band BTS accidentally play the band's hit song "Dynamite" rather than azaan (the Muslim call to prayer, also known as "adhan") over loudspeakers at a mosque? No, that's not true: the viral image making the claim is satire.

The claim appeared in an Instagram post (archived here) published on June 29, 2021. The text in the post's image opened:

Muslim BTS fan accidentally plays the song 'Dynamite' instead of Azaan on loudspeakers at 4am; gets arrested

A rudimentary reverse image search Lead Stories conducted on TinEye turned up no matches for the photo of a minaret used in the post.

The watermark in the upper right corner of the image read "Real Inshots," a social media account on Instagram that posts satirical content. The page's bio states:

we provide india's foremost fictitious news.
follow us at your own risk.

Although the post was no longer on the page's feed, the page did post a Story Highlight about it. A screenshot of the highlight is included below: 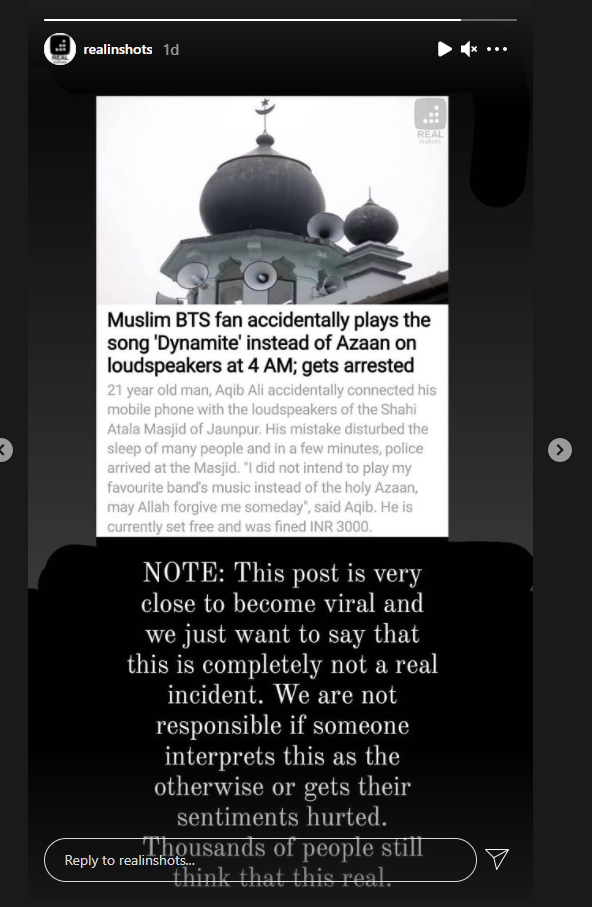 Lead Stories reached out to @realinshots through an Instagram direct message on June 30, 2021, to confirm whether the image originated on their page and when it was originally posted. We received a nonsensical crude response, further indicating their proclivity for "fictitious" content.