Was a Florida court told that Rep. Ilhan Omar, D-Minnesota was recruited by Qatar, received money from that country, and passed "sensitive intel" to Iran through intermediates? Yes, but the statements were made in a deposition during a lawsuit that had nothing to do with Omar and no evidence was presented to prove it was truthful testimony. The lawsuit was dismissed in 2020. The spokesperson for the Minnesota representative told Lead Stories the claim was "false" and Lead Stories found no supporting material in the court file.

A Florida court was told that Ilhan Omar was recruited by Qatar, received money from them, and passed sensitive intel to Iran through intermediates. Why is she still in office and not charged with treason?
Retweet the hell out of this!! 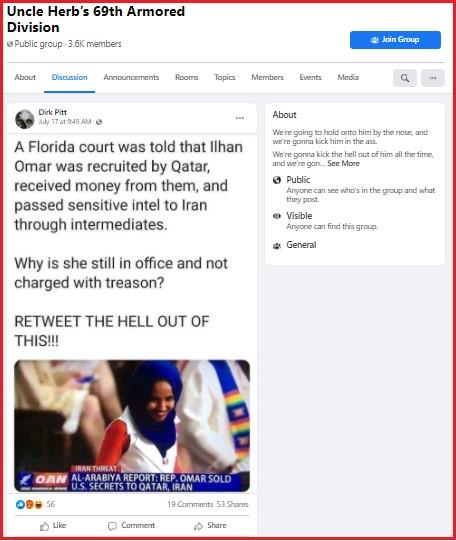 Jeremy Slevin, spokesperson for Omar, emailed Lead Stories on July 19, 2021, regarding the claim, "confirming that it is false."

The claims about Omar were made during a deposition in a lawsuit that was dismissed on January 29, 2020, according to court records:

Jan 29, 2020
ENDORSED ORDER: Pursuant to Federal Rule of Civil Procedure 41(a) and "Plaintiffs' Notice of Voluntary Dismissal Without Prejudice of Complaint as to All Defendants" (Doc. ## 27 and 28), this case is dismissed without prejudice. The Clerk is directed to terminate any pending motions and deadlines, and thereafter close this case. Signed by Judge Thomas P. Barber on 1/29/2020. (ANL) (Entered: 01/29/2020)
Main Doc­ument
Jan 29, 2020
Order dismissing case

It was filed in U.S. District Court for the Middle District of Florida in July 2019 by Matthew Pittard and Matthew Allende, bodyguards for Sheikh Khalid bin Hamad al-Thani, a member of the Qatari royal family. In the lawsuit Pittard claimed he was "solicited" to murder two people and witnessed Khalid and his private security staff holding an American citizen against their will. Both men claim their wages were withheld and they did not receive overtime compensation. Omar is not mentioned anywhere in the lawsuit reviewed by Lead Stories.

The deposition in which the accusations were made against Omar was given by a man named Alan Bender. It is not public record and Lead Stories has been unable to obtain a copy, but the deposition was reported on by The Jerusalem Post and by the Daily Caller.

The 2019 Daily Caller article, titled, How A Fake Imam, The Krassenstein Brothers And A Canadian Played Roles In A Dubious Story About Ilhan Omar And Qatar debunked the claims about Rep. Omar, noting that there was no reputable evidence that the accusations against Omar were true:

The Daily Caller News Foundation reviewed the deposition and deemed it not credible. It even gets Omar's job wrong, repeatedly calling her a senator.

Lead Stories could find no supporting evidence of this accusation in the court file, nor any connection between Omar and the conflict at the heart of the case.