Did Nazi Germany concentration camps sterilize prisoners with fluoridated water? No, that's not true: This is a recycled conspiracy theory, and an expert in this field told Lead Stories it didn't happen.

In addition, water fluoridation has been deemed safe for the past 75 years, according to the Centers for Disease Control and Prevention (CDC).

The post features what appears to be a meme with the image of a skull, a photo of a young boy and a water fountain labeled "fluoride." The text above reads:

Nazi Germany used water fluoridation in concentration camps to sterilise the humans and force them into calm submission. 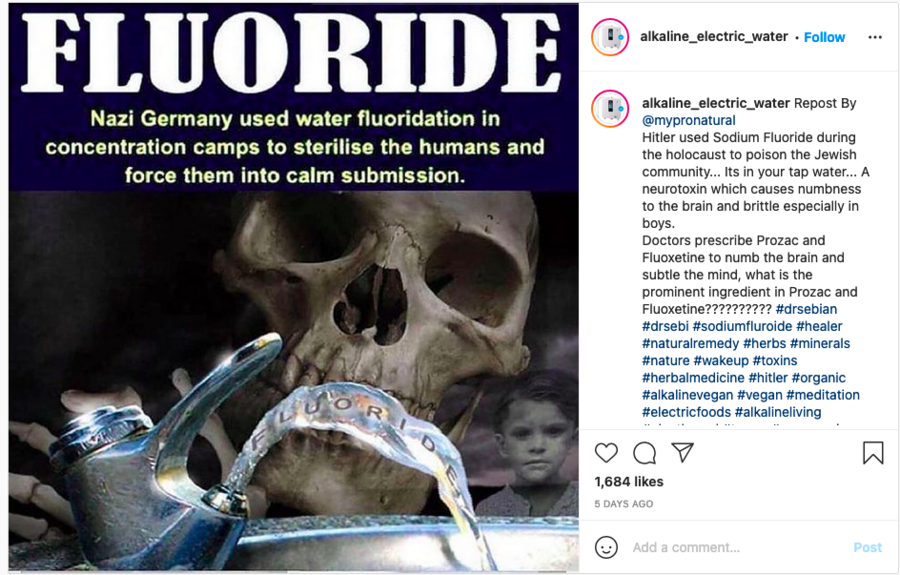 Paul Lerner, director of the Max Kade Institute for Austrian-German-Swiss Studies at the University of Southern California, told Lead Stories In an August 26, 2021, email:

As a scholar and professor of modern German and European history, I can attest to the fact that the Nazis did not use water fluoridation in concentration camps. There is no credible evidence to support the spurious claim that the Nazis used fluoridation to sterilize or subordinate camp inmates.

Fluoride is a natural mineral, and sodium fluoride, which is what's added to water systems, is the inorganic salt of fluoride. Fluoridated water is not only safe to drink, but prevents cavities, according to the CDC. The United States has been adding fluoride to the public water supply since 1945 to improve dental health; in the United Kingdom since the 1960s.

Being exposed to too much fluoride -- above 6 milligrams per day -- can result in progressive stiffness and pain in the joints over many years, the World Health Organization says. The effects don't include "numbness in the brain" or "brittle." The optimal amount that cities add to water is 0.7 milligrams per liter, according to the U.S. Public Health Service.

As for Prozac, its primary ingredient is fluoxetine hydrochloride. Fluoride is one of the five elements that makes up fluoxetine.