Did the Federal Bureau of Investigation release a study ranking zodiac signs in terms of "dangerousness"? No, that's not true: This is a recycled hoax that has circulated in blog posts as far back as 2017. There is also no publicly available evidence to confirm that a study such as this has ever existed and an FBI spokesperson confirmed the FBI conducted no such study.

The claim appeared in a Facebook post (archived here), where it was published on August 17, 2021. The caption opened:

First of all I am shocked that Aquarius is not higher on the list.

Second of all, they didn't have to play Sagittarius like that

According to the Federal Bureau of Investigation, individuals convicted for crimes are most likely to have been born under the zodiac sign of Cancer. Here are the rest of the signs ranked in terms of their dangerousness:

The FBI has not conducted a study of the most dangerous zodiac signs.

A site search on FBI.gov using the key terms "Most Dangerous Zodiac Signs" did not reveal any such release or publication pertaining to the claim. The only published study merely using the term "Zodiac" refers to the "Zodiac Killer" of the late 1960s.

A general Google search using the key phrase "FBI Study of Zodiac Signs" reveals no verifiable reports released by the FBI or any other U.S. government-related offices for that matter. It instead displays a 2017 blog post published on OneIndia.com, an unverified and self-described multilingual news platform, citing this same claim without any link to a study released by the FBI.

Additional searches on platforms like Bing.com and Google Scholar using the key terms "FBI Study of Zodiac Signs" did not yield any credible results as well. Even a TinEye reverse image search did not reveal where this post may have originated. 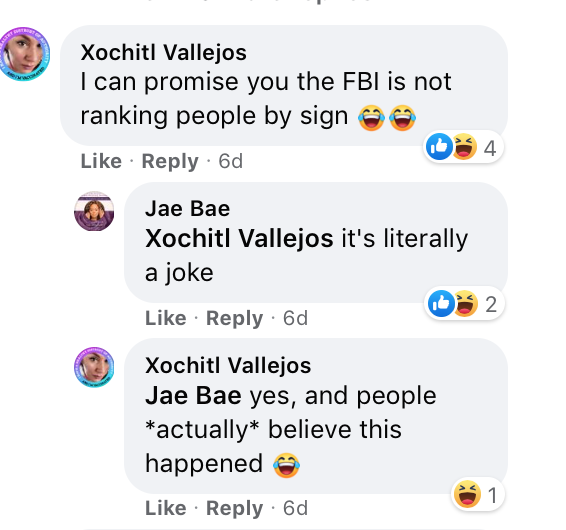 Lead Stories reached out to the FBI press office concerning the claim. In an August 23, 2021 email, the FBI declined comment.