Did the 19th century Russian novelist Fyodor Dostoevsky say or write this prediction: "Tolerance will reach such a level that intelligent people will be banned from thinking so as not to offend the imbeciles"? No, that's not true: This quote has only recently been incorrectly attributed to "Dostoievski" on social media and there are no records of Dostoevsky writing it. For several years, memes bearing a virtually identical quote in the Russian language have appeared paired with images from the1988 Russian made-for-TV film titled, "Heart of a Dog" based on the 1925 book of the same name by Mikhail Bulgakov. The quote does not appear in the writing of Bulgakov, or in the screenplay of the 1988 TV film written by Natalia Bortko.

Memes including portraits of Dostoevsky paired with this quote began appearing on Facebook in July of 2021 on anti-vaccine activists' social media accounts. One example is this post published by Great Homeschool Conventions on July 29, 2021. The text in the meme reads:

Tolerance will reach such a level that intelligent people will be banned from thinking so as not to offend the imbeciles.
Dostoievski 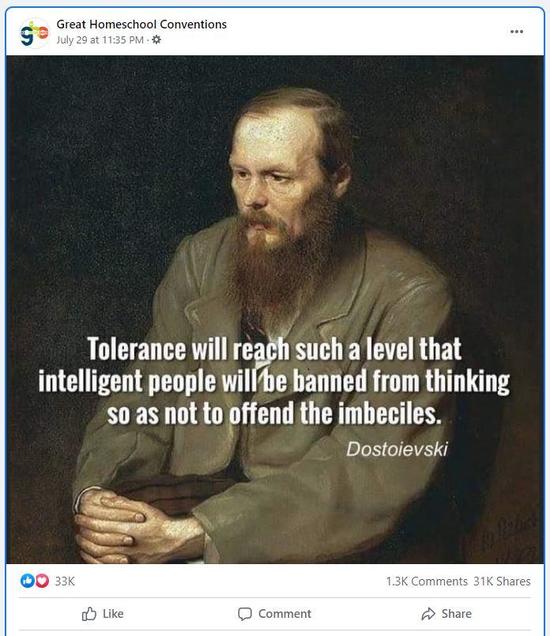 Years earlier, a similar set of memes began circulating on Facebook. These have Russian-language text of the quote and carry no attribution. The images paired with the text are movie stills of a character from "Heart of a Dog," Professor Filipp Filippovich Preobrazhensky, played by the actor Evgeniy Evstigneev. Although these memes resurfaced in the summer of 2021, the original appearance on social media seems to have been in October of 2019. One early instance of this meme is a December 19, 2019, request for help translating the text, which was posted on Reddit. Two Russian speakers who replied, translated it:

It seems to me, that soon tolerance will soon lead to clever people being prohibited to think, because it offends the stupid.

Tolerance seems to be arriving soon at the point where the intelligent ones will be forbidden to think, as it will offend the feelings of the ignorant ones 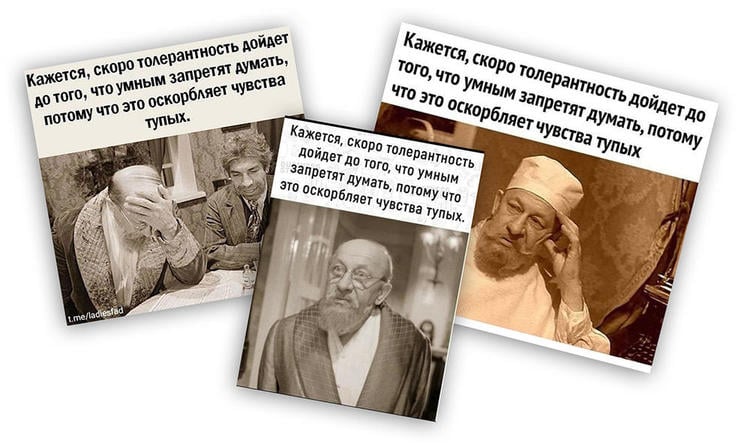 Lead Stories reached out by email to the reference librarians at the Petro Jacyk Central & East European Resource Centre at the University of Toronto. We heard back from the reference specialist, Wasyl Sydorenko, after he reviewed the Natalia Bortko screenplay of the film "Heart of a Dog". He verified that the phrase, which appears to have taken on a certain idiomatic form in both the Russian and English language, does not appear within the movie and the quote cannot be attributed to either Dostoevsky or Bulgakov.