Did the Taliban use a U.S. Blackhawk helicopter to hang a person and then fly over the city of Kandahar with their body suspended by a rope? No, that's not true: This blurry footage shows a helicopter flying with a living person suspended below. The person is supported by a harness, not by a noose around their neck. Additional footage which is not as blurry, clearly shows the person moving.

The video appeared originally on Twitter from the Taliban's @TalibTimes account. Some who then reshared the video added captioning claiming that the person had been hanged, such as this post published on Facebook on August 30, 2021, with this caption:

It's an absolute shitshow to see the Taliban now actually flying US BlackHawk helicopters, hanging people by the throat from them!!
****not my video our pictures not trying to take credit! Just very upset 😢
Keep Sharing this FB is trying to take  it down.
Link to the Service Dogs: 😞https://www.trackfido.com/pages/working-dogs-left-behind-in-kabul 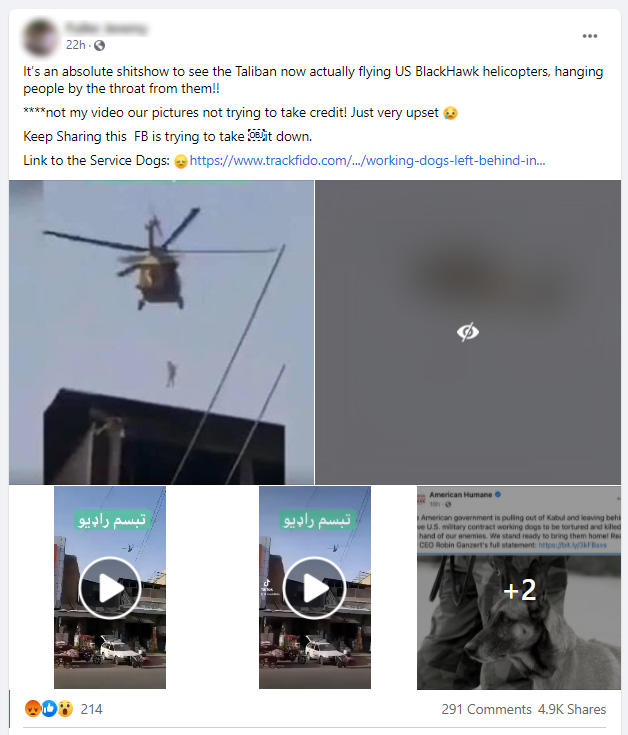 On August 30, 2021, the @TalibTimes twitter account, which identifies itself as the "English language official account of Islamic Emirate Afghanistan," which is what the Taliban calls the country, posted the 12-second video of the helicopter flying over the city with a person suspended below. Although the video was posted on August 30, there is no indication when the footage was shot. The caption of the post reads:

Our Air Force!
At this time, the Islamic Emirate's air force helicopters are flying over Kandahar city and patrolling the city. 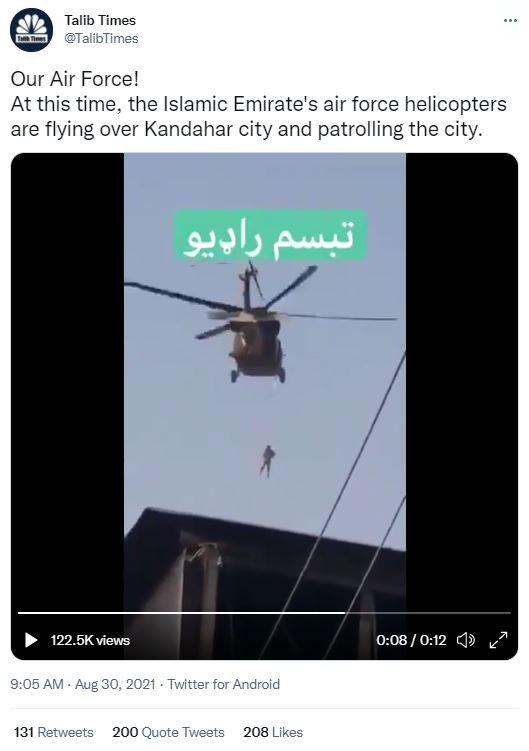 In a constantly updating "live" report about the situation in Afghanistan, the BBC reported, "Viral video does not show man hanged from helicopter." The video screenshot included in the article shows the person suspended from a harness and with their arm raised up. The report says:

Several Afghanistan experts, quoting Taliban sources, have told the BBC that the flight yesterday was an attempt to fix a flag over a public building using their newly-captured US-built equipment.

This screenshot that appears in the BBC article appears to have originated from a video posted on Twitter on August 30, 2021, by @haji52292547. This video shows a much clearer view of the suspended person and it is possible to see them moving their arms and to make out the bright straps of the harness on their back. An open source investigation by altnews.in titled, "Does the video show Taliban 'hanging' a body from a helicopter?" has collected additional footage and photos of this flight posted that were on Twitter by searching by location and keywords in the Pashto language spoken in Afghanistan. 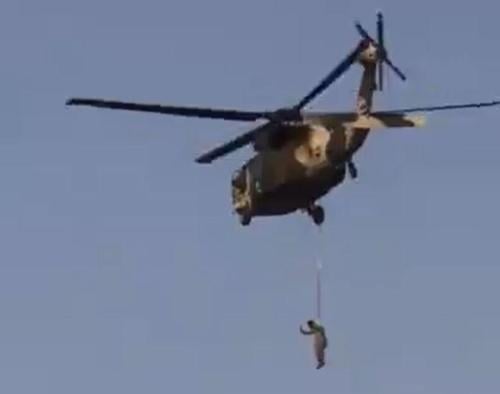 Army Technology, a website dedicated to defense industry news, includes in its specifications for Blackhawk helicopters, that some models are equipped with rescue hoists. Outer sites say the hoists can lift 600 pounds on a 200-foot cable.

Lead Stories will be publishing a separate article concerning the dogs that were mentioned in this Facebook post.