Did a funeral director from Milton Keynes, England, make a case that the coronavirus pandemic is a hoax, or that it is caused by the COVID-19 vaccine? No, that's not true: John O'Looney's conspiracy theories defy logic and are readily dismissed with publicly available information.

His interview, dated September 16, 2021, has been mirrored on many video platforms. One example was a video posted to Facebook as if livestreamed (it wasn't) on September 20, 2021. It appeared on a page called "Hot News American" that is listed as a gaming video creator (it isn't). It was captioned: 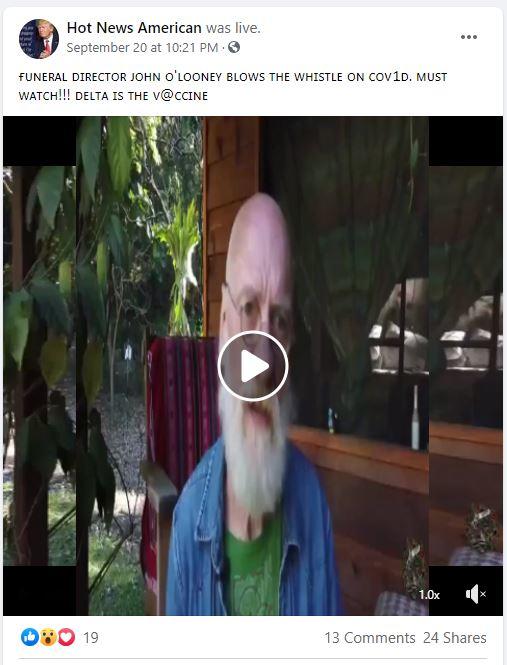 (Image source: Facebook screenshot taken on Thu Sep 23 21:15:09 2021 UTC)
This video is a very loosely formatted interview. Aside from the introduction and conclusion, interviewer Max Igan stays in the background and allows O'Looney to talk about his own experience and thoughts about the COVID pandemic. O'Looney is a funeral home director from Milton Keynes, a town 50 miles to the northwest of London. He introduces many claims over the course of this 38-minute video. Some are readily disproven with publicly available data. Lead Stories will look at just a few of these.
A claim at nine minutes that thousands of people in care homes have been murdered or "culled" by their caretakers with overdoses of the drug midazolam is a recycled conspiracy that originated with David Icke and has been debunked in an extensive article by fullfact.org. O'Looney offered no evidence to support this baseless claim.

Claim: The NHS recognizes the delta variant as a vaccine injury

At 19:36 in the video O'Looney says the delta variant is widely recognized within the NHS (the United Kingdom's National Health Service) as a vaccine injury, not a virus. This is not true. The delta variant B.1.617 genome originated in India in October 2020 and predates the public rollout of COVID vaccines that began in the U.K. on December 8, 2020. Many unvaccinated people have contracted the delta variant, which defies the assertion that it's a vaccine injury. The NHS says:

Anyone who gets COVID-19 can become seriously ill or have long-term effects (long COVID). The COVID-19 vaccines are the best way to protect yourself and others.

Research has shown the vaccines help:

Claim: Second wave surge of deaths began with the vaccines
O'Looney's theory does not mesh with the vaccination data available from coronavirus.data.gov.uk. The data recorded on the charts begins on January 10, 2021, when 4.2% of the population, or 2,286,572 people had received their first dose of the COVID-19 vaccine. O'Looney claims that it was the vaccines that were responsible for the second wave, which was already at its peak in early January. At 15:12 in the video he says:

We weren't being told the truth. I said to people, 'I bet the death rate soars in January when they begin vaccinating.' And everybody laughed at me. They said, 'No don't be so stupid, you're mad.' And we came back to work on the 2nd and on the 6th they began vaccinating -- and the death rate was extraordinary. I've never seen anything like it as a funeral director in 15 years and neither has anyone else I've spoken to. And it began exactly when they began putting needles in arms.
That was the recognised second wave, that went on about 12 weeks and finished abruptly the second week of April.

(Image source: coronavirus.data.gov.uk screenshot Thu Sep 23 22:12:37 2021 UTC)
From January to April, 2021 about 400,000 people in the U.K. were vaccinated per day. The second wave peaked in January and steadily declined through the time when vaccine uptake was at its highest.

(Image source: coronavirus.data.gov.uk screenshot Thu Sep 23 22:12:37 2021 UTC)
The chart below shows the deaths in the U.K., lagging behind the peak of second wave cases by several weeks.

So far in England and Wales, there have been two periods during the coronavirus (COVID-19) pandemic when weekly and monthly registrations of deaths from all causes were consistently higher than the five-year average - also known as 'excess deaths.'

Excess deaths are the clearest way to compare the likely impact of the pandemic over time, because a substantial number of non-COVID-19 excess deaths were recorded early in the pandemic, in March and April 2020. One reason for excess deaths could be that COVID-19 was undiagnosed.

Lead Stories has written about Max Igan in the past when he spun a theory that attempted to connect Bill Gates, Anthony Fauci, George Soros and Jeffrey Epstein.
Lead Stories has also recently written about a network of foreign-run "gaming video creator" pages (examples here and here) that republish plagiarized clickbait content. One of the hallmark tricks of these pages is to use typefaces of other languages that look similar to other typefaces to humans, but are not able to be read by AI. This is called a homoglyph. To illustrate this: Google Translate auto-detection interprets the title of this video as written, to be Vietnamese.