Did a member of the Food and Drug Administration's Vaccines and Related Biological Products Advisory Committee say, "We are killing more people than we are saving with the shots"? No, that's not true: A member of the public said this. The comment was made during the public testimony portion of the advisory committee meeting. The person who said that, Steve Kirsch, is an entrepreneur, the founder and executive director of a public charity called The COVID-19 Early Treatment Fund. The stated mission of CETF is to fund outpatient clinical trials for existing drugs in order to find an effective early treatment for COVID-19.

Claims misrepresenting the source and context of these comments began to appear on September 18, 2021, a day after the advisory committee met and eight hours of proceedings were livestreamed by the FDA. The full meeting was broadcast on the FDA's streaming website, YouTube, Twitter and Facebook. One example of the misleading claim appears in an article (archived here) published by beforeitsnews.com on September 18, 2021, titled "This Is Massive! A Member of The FDA Vax Panel Today Said... 'We Are Killing More People Than We Are Saving With The Shots.'" This includes a short video clip of just the comment by Kirsch. The article opened:

In a vote of 16-2, a key Food and Drug Administration (FDA) panel rejected a plan to approve Pfizer booster shots.

The Associated Press reports that the panel voiced frustration that Pfizer had provided little data on the safety of the extra doses.

This Is Massive! A Member of The FDA Vax Panel Today Said... "We Are Killing More People Than We Are Saving With The Shots" | Before It's News

On September 17, 2021, the FDA's Vaccines and Related Biological Products Advisory Committee met to discuss the proposed third, or "booster," dose of Pfizer's COMIRNATY COVID-19 vaccine. The video clip of two minutes, 20 seconds posted by beforeitsnews.com was taken from the meeting's livestream. Removed from the context of the full meeting, it is not immediately apparent that Kirsch is a member of the public speaking at an FDA Advisory Committee meeting.

The clip is an accurate excerpt of the slides submitted and Kirsch's comments, which sometimes do not match or support the slides on screen. This fact check will not address all of his claims. The open public hearing portion of the meeting begins halfway through the eight-hour-long meeting, with Kirsch's comments coming approximately four hours, 20 minutes in.

The screenshot below shows the moment when Dr. Arnold Monto, acting chair, opened the meeting to public comments and asked the presenters to voluntarily disclose any financial relationships with the sponsor (this would be Pfizer), its product or direct competitors. 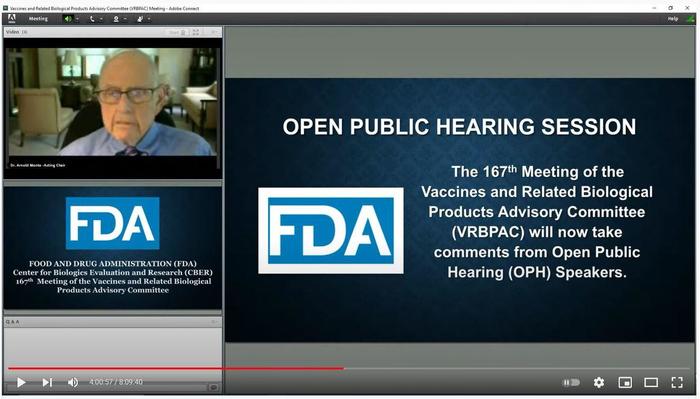 Kirsch introduces himself as the executive director of the COVID-19 Early Treatment Fund and states that he has no conflicts before making the claim that the vaccines kill more people than they save. His claims in these comments spring from two of his beliefs. One is that the Vaccine Adverse Event Reporting System (VAERS) database can be used to draw numbers from and reach conclusions about adverse events as if the database were a controlled clinical trial. And two, that the database is so deeply flawed, and adverse events are so underreported that numbers drawn from it should be multiplied by a factor of at least 41 to even begin to approach the number of incidents that have actually happened.

At the 04:21:18 mark of the FDA livestream Kirsch claims that 150,000 people have died from the vaccine. How he arrived at these numbers he didn't explain, but the origins of this claim are outlined in a report he published and co-wrote titled, "Estimating the number of COVID vaccine deaths in America." He explains in the summary:

Using the VAERS database and independent rates of anaphylaxis events from a Mass General study, we computed a 41X under-reporting factor for serious adverse events in VAERS, leading to an estimate of over 150,000 excess deaths caused by the vaccine.

The Mass General Study Kirsch mentions is an article in the form of a research letter published in the Journal of the American Medical Association on March 8, 2021. The article reports on the incidence of adverse reactions, notably instances of anaphylaxis ("a severe, life-threatening allergic reaction that occurs rarely after vaccination," according to the CDC) , that were experienced by some of the 64,900 employees at Mass General Brigham who received at least one dose of either the Pfizer or Moderna COVID vaccine. The authors report that they found a higher incidence of anaphylaxis than is found in the VAERS database but the rate was still in line with "other common health care exposures":

In this prospective cohort of health care employees, 98% did not have any symptoms of an allergic reaction after receiving an mRNA COVID-19 vaccine. The remaining 2% reported some allergic symptoms; however, severe reactions consistent with anaphylaxis occurred at a rate of 2.47 per 10 000 vaccinations. All individuals with anaphylaxis recovered without shock or endotracheal intubation.

The incidence rate of confirmed anaphylaxis in this study is larger than that reported by the Centers for Disease Control and Prevention based on passive spontaneous reporting methods (0.025-0.11 per 10 000 vaccinations). However, the overall risk of anaphylaxis to an mRNA COVID-19 vaccine remains extremely low and largely comparable to other common health care exposures. Although cases were clinically compatible with anaphylaxis, the mechanism of these reactions is unknown.

Lead Stories has debunked scores of claims that misrepresent VAERS data. This Lead Stories article explains the purpose and limitations of the passive reporting system. The VAERS website contains a disclaimer, which Kirsch disregarded in order to extract and then multiply by an "under-reporting factor" (URF) of 41 in order to develop his own projected numbers. The VAERS database disclaimer is partially excerpted below:

VAERS accepts reports of adverse events and reactions that occur following vaccination. Healthcare providers, vaccine manufacturers, and the public can submit reports to the system. While very important in monitoring vaccine safety, VAERS reports alone cannot be used to determine if a vaccine caused or contributed to an adverse event or illness. The reports may contain information that is incomplete, inaccurate, coincidental, or unverifiable. In large part, reports to VAERS are voluntary, which means they are subject to biases. This creates specific limitations on how the data can be used scientifically. Data from VAERS reports should always be interpreted with these limitations in mind.

At the 4:22:30 mark Kirsch moves on to a slide about myocarditis. His remarks do not support the slide at all; more on this later. This is actually a slide within a slide. The chart colored green, pink and blue, and bearing the logo of the Centers for Disease Control and Prevention (CDC), appeared originally as slide 13 in a report by John R. Su of the vaccine safety team of the CDC COVID-19 Vaccine Task Force. That report was presented to the Advisory Committee on Immunization Practices on August 30, 2021.

Kirsch has highlighted two cells from this chart with a red box. These represent cases of myocarditis in 16- to 17-year-old males who received a first or second dose of the Pfizer vaccine. Per million doses administered, 5.2 teens who got one shot developed myopericarditis, and 71.5 teens who got both shots. Kirsch has applied his own calculations to these and noted them in the margins, but not in the spoken presentation. In bold white and yellow text, Kirsch's notes say: 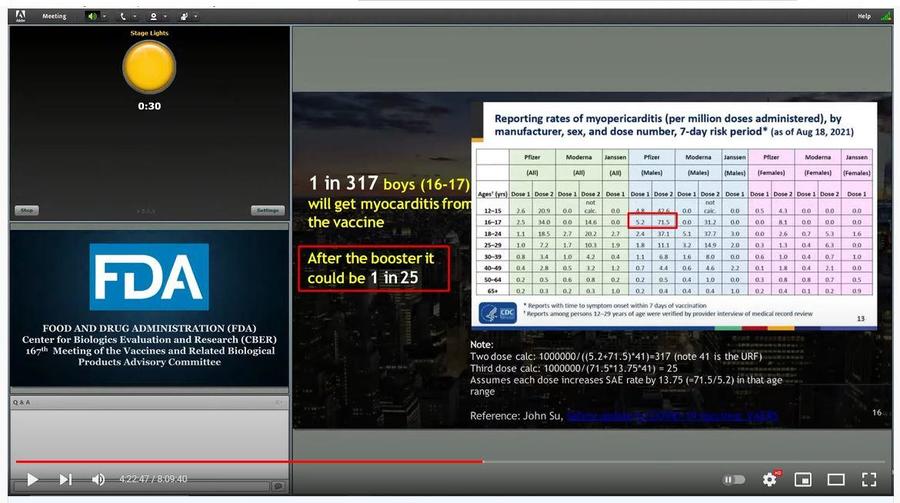 To arrive at the 1 in 317 estimate, the two highlighted numbers were added together and have been multiplied by Kirsch's under-reporting factor of 41 before being divided by one million. Sandwiched between the logo of the FDA and the CDC, it appears that Kirsch is highlighting data from an official source, and he does not explain these numbers came from his own calculations.

Lead Stories reached out to Indiana University Economics Professor Micah Pollak to find out how one would properly calculate this example without Kirsch's URF of 41. Pollak explained via Twitter Direct Message that this type of calculation is called conditional probability:

If Kirsch was not explaining his calculations, what was he saying? Instead of talking about the slide, he introduced a recently published preprint prospective case study that has not yet been peer reviewed. He said:

The paper just posted yesterday on medrxiv entitled 'mRNA COVID-19 Vaccination and Development of CMR-confirmed Myopericarditis' shows that the myopericarditis was one in 1,000. And that's an overall age range from 18 - 65 mean age of 33. It is not inconsistent with what the VAERS shows.

This study counted the number of patients over two months who were admitted to an academic medical center and diagnosed with myocarditis, myopericarditis or pericarditis who had been vaccinated in the past month. This number was then divided by what was supposed to be the number of vaccinations that had been administered in the Ottawa, Ontario, region during that time. Several people left comments at medrxiv.org questioning the denominator and suggesting that many more people in the region had been vaccinated in that time -- that the figures could be off by more than a factor of 10.

On September 18, 2021, a family physician, Buzz Hollander, asked one of the study authors on Twitter if he might respond to questions about the denominator. On September 22, 2021, Andrew Crean, professor of cardiology at the Ottawa Heart Institute, revised the original estimate and replied that the cases were fewer than 5 in 100,000.