Does a widely shared video show a real instance of a woman in a wheelchair pretending to have lost her leg to collect money and then being confronted about her fakery? No, that's not true: The video shows several signs of being staged.

The claim appeared in a Facebook post (archived here) from August 27, 2021. It featured a video that's three minutes three seconds long of a woman with two legs adjusting herself in a wheelchair to make it appear as if she lost part of one of her legs. The person filming her gets out of his car and confronts her, taking some of her money until she is forced to drop her act revealing she has both legs and then chasing the filmer to get her money. The caption of the post read:

Rick Lax Productions specializes in magic shows (Making Magic, The Justin Flom Show) and comedy shows (The Pun Show, The B Family). But we've got lifestyle shows (The Adley Show) and inspirational shows (The Elly Brown Show), too. Some of our shows transform popular 'found footage videos' through unique editorialization and other meaningful alterations (like Rick Lax's Favorite Videos). But most of our shows feature fully original videos (like The Rick Lax Show and The Ryan And Amber Show).

Like the video examined in this fact check, most of the Rick Lax-style videos are just over three minutes long. This approach seems to take advantage of some of Facebook's previous in-stream advertising eligibility policies, as seen in a version of the policies from 2020 found here:

Have 30,000+ 1-minute views
This metric helps determine how successfully you'll be able to monetize with in-stream ads. In the last 60 days, you need to have had at least 30,000 one-minute views on videos that are at least three minutes long.

Publish 3-minute videos
Videos themselves must be at least three minutes long to be eligible for in-stream ads.

Other clues suggest that the video is staged. The narrator of the video is sitting in their car with another person right in front of the woman in the wheelchair without being detected. The woman in the wheelchair also sets up her disguise in clear view of the camera, even writing a sign reading "Lost A Leg Please Help" with the sign angled toward the camera. A screenshot of the woman writing the sign at the 0:59 mark is included below: 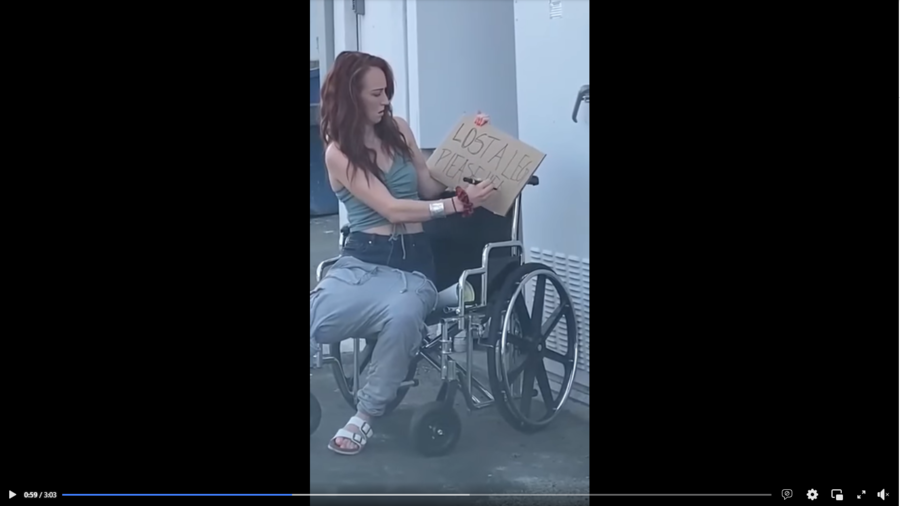 Additionally, the woman does not look as if she needs financial assistance. Although she receives money from one passerby, her appearance does not look much different than his. She is wearing an Apple Watch and has what appears to be manicured fingernails. A screenshot of the woman's appearance at the 1:22 mark is included below: 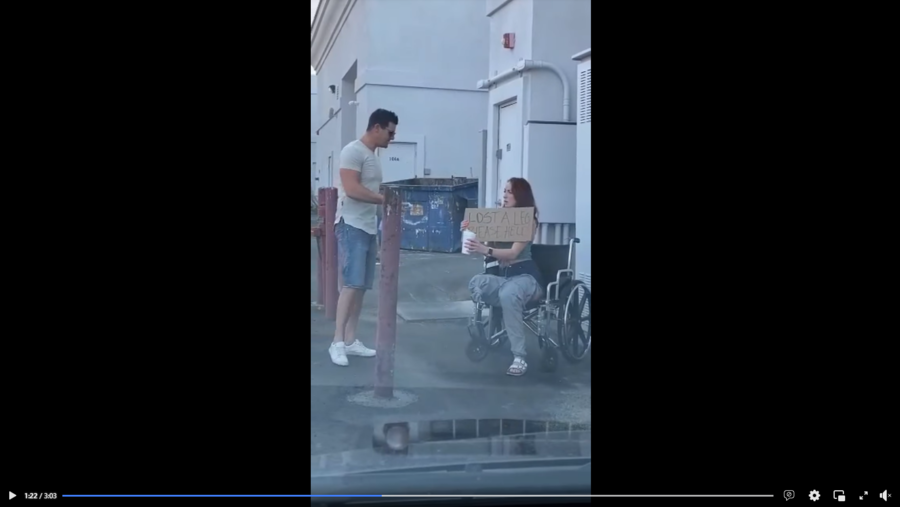