Does this photo accurately portray the appearance of Canadian Chief Public Health Officer Dr. Theresa Tam? No, that's not true: This photo, which originally appeared in the Toronto Star on April 23, 2020, has been digitally altered in several ways to change how she looks. Other public health officials, such as Dr. Barbara Ferrer, public health director of Los Angeles County, have also been similarly attacked by means of photo manipulation.

The earliest altered version of the Tam photo that Lead Stories identified was posted to a Facebook page titled "4chan /x/ - Paranormal" on May 4, 2021. That post did not identify the person pictured, and did suggest that the image was edited. The altered photo had renewed attention in September 2021. One example is from a Facebook post on September 10, 2021, with the caption:

Look very closely...what does your intuition tell you?

The image has been altered in a way that specifically feeds into QAnon conspiracy tropes calling QAnon's targets demonic or reptilian. One obvious change to the photo is the color saturation and contrast that enhances wrinkles and shadows. Skin blemishes have been added, and both the eyes and mouth have been enlarged. The size of the irises has also been enlarged and their color changed to an inky black. Captions and comments on social media posts use dehumanizing language like, "I don't want it ministering to my health." An Instagram post has text reading, "Health minister of Canada. No one will ever convince me this is not a demon."

Below is a comparison of the altered image and the original as it appeared in an article titled, "Conservative MP's ugly smear against Theresa Tam comes from an infection in Canadian politics," in thestar.com on April 23, 2020. 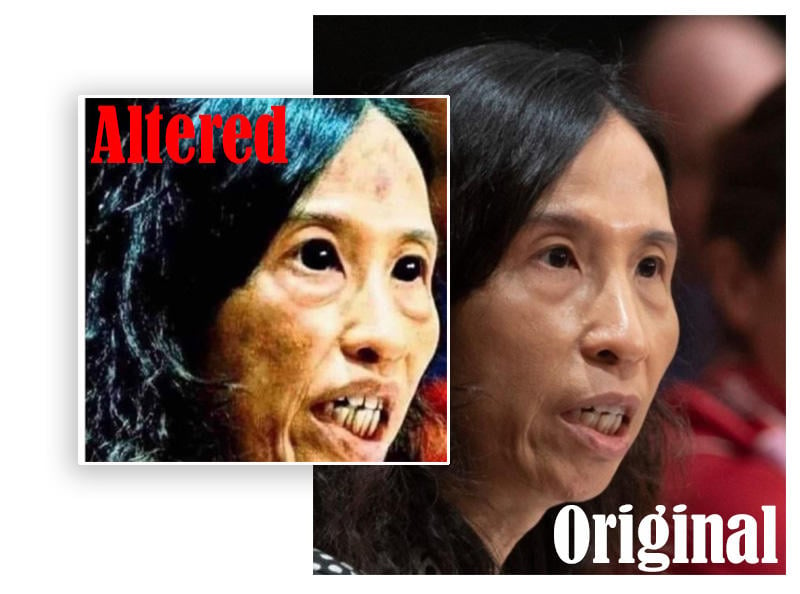 Another public health official whose appearance has been attacked and misrepresented through photo manipulation during the COVID-19 pandemic is Dr. Barbara Ferrer. A photo still from a May 13, 2020, COVID news conference has been altered. The altered photo appears in a September 13, 2021, Facebook post. In this case the warm tones of Ferrer's complexion have been reduced, making her appear grey, and dark shadows have been added to her eyes.