Is the message some citizens received at one Los Angeles County voting center -- that a county computer indicated they had already voted -- evidence that Republican votes were stolen in California's gubernatorial recall election? No, that's not true: Election officials said iPads used by poll workers to check voter registrations held outdated information and had to be reset. Officials said up to 70% of citizens who showed up at a Woodland Hills center the first morning it was open had already cast their ballots. A technician discovered those devices had not been reset since the last election, something that was easily fixed, the poll manager told Lead Stories. Those votes had not already been cast by someone else -- or "stolen." The 70% likely included more Democrats than Republicans since the GOP is a minority of voters in that area of Los Angeles County.

The claim appeared in a variety of social media posts, including a video (archived here) posted by the Californians for TRUMP Facebook page on September 15, 2021 under the title "ON TAPE: Republicans Told 'Already Counted.'" The text post introducing the video read:

Amazing: "70% in LA County told they already voted- All Republicans" --Where's the media? It is not about bringing this issue up about "winning" but simply about including every vote and having fair elections. Mail in ballots are here to have proven to be pre-printed by someone else- and sent in. No signature votes. This is serious.

The video is hosted by Rachel Hamm, an announced candidate for secretary of state in California's 2022 Republican primary election. She is interviewing Emon Afshar, a Woodland Hills, California, resident who sent an email to news organizations and others about his experience at the Woodland Hills voting center. 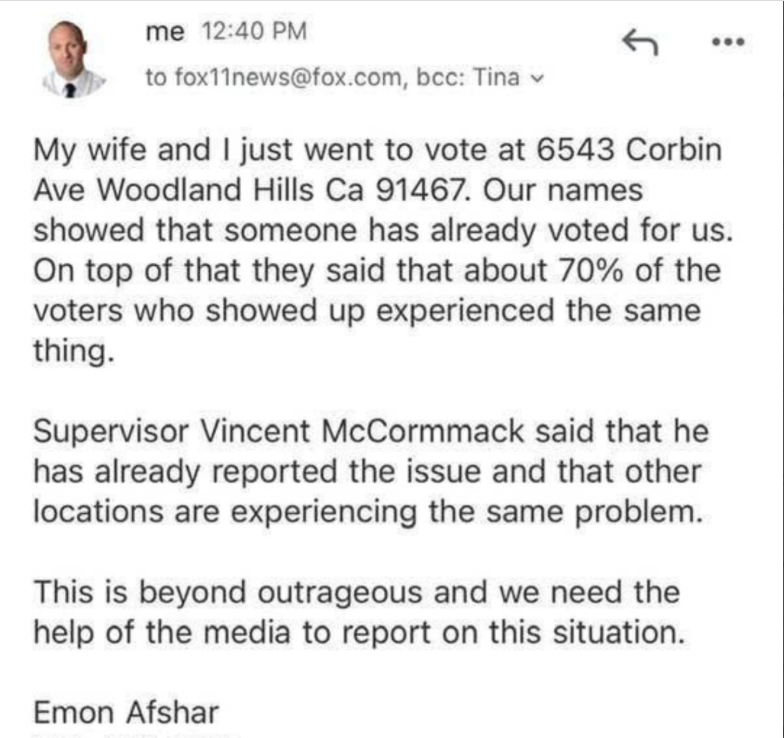 My wife and I just went to vote at 6543 Corbin Ave Woodland Hills Ca 91467. Our names showed that someone has already voted for us. On top of that they said that about 70% of the voters who showed up experienced the same thing. Supervisor Vincent McCormmack said that he has already reported the issue and that other locations are experiencing the same problem. This is beyond outrageous and we need the help of the media to report on this situation.

Lead Stories interviewed Afshar by phone on Monday. He told us that he had just received a call from the Los Angeles County voter registrar who explained to him that the problem was with the iPads not being reset at two voting centers. This resulted in those iPads indicating some people had already voted, he was told.

Lead Stories visited the Woodland Hills voting center on Monday. The poll manager gave us the same explanation. The manager, who did not wish to be named, said the tech support staff diagnosed the problem and it was fixed by 2 p.m. Saturday. We observed no citizens being told they had already voted during our visit.

A statement from the Los Angeles County Registrar, forwarded to Lead Stories on September 17, 2021, said the equipment was replaced and voting was underway within hours. Mike Sanchez, spokesman for the Registrar's office, said the September 11, 2021, statement issued by the Registrar reads as follows:

The Registrar identified issues with the settings on some of the electronic poll book devices used at these locations to check-in voters prior to issuing ballots. The voters who experienced this issue were offered and provided a provisional ballot - the failsafe option to ensure no one is turned away from voting. Provisional ballots are regular ballots and once the eligibility of the voter is verified, they are processed and counted. After troubleshooting the issue, the equipment at the locations was replaced and voting continued.

Woodland Hills is one of 253 in-person voting locations in Los Angeles County. Affected voters (not all voters were impacted) were given a provisional ballot to cast, which were then verified and included in the Election Night tally.

Afshar told Lead Stories the glitch did not stop him from casting a ballot on Saturday. He drove one mile away to the Pierce College voting center to check on the system and at that location, the pollbook did not indicate that he had already voted. He and the other voters could have also used the paper ballot that had been mailed to their homes or a provisional ballot available at all voting centers.

Although we did not ask Afshar his party affiliation or how he voted on the question of recalling Gov. Gavin Newsom, he said he suspected the glitch only affected conservative voters. He acknowledged that it was just a suspicion and he had no evidence to support it.

Still, the Californians for TRUMP Facebook page summarized Afshar's story with the claim "70% in LA County told they already voted- All Republicans." Afshar's experience was in only one voting center for one morning. It was not relevant to all of Los Angeles during all the voting. And it could not have been that all of the 70% who were told that at the center that morning were Republicans, considering the Woodland Hills neighborhood votes overwhelmingly for Democrats. 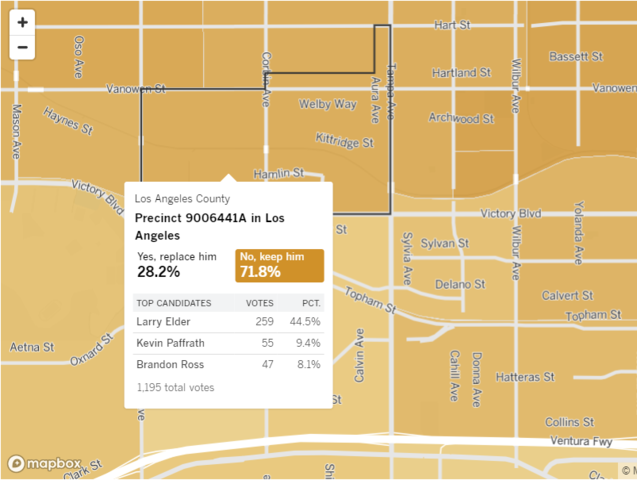 Nearly 72% of the voters there voted to keep Newsom as governor, for example.

While Rachel Hamm used Afshar's story to claim GOP votes were "stolen" and that an investigation might overturn the recall results, she offered no evidence beyond Afshar's story about one voting center's temporary glitch.