Did conservative commentator Ben Shapiro tweet "next Joe Biden is gonna tell me how long my pubes have to be"? No, that's not true. A tweet allegedly by Shapiro that claimed he "doesn't have any pubes yet" is a fake satirical message.

Next Joe Biden is gonna tell me how long my pubes have to be. Jokes on you Joey B. I don't have any pubes yet. My mom says maybe next year. 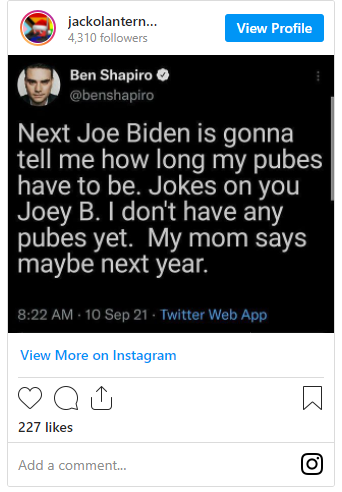 The Way Back Machine Internet Archive took two screenshots of Shapiro's Twitter account on September 10, 2021, none of which show a posted message about his "pubes":

Lead Stories previously published a debunk of a fake Shapiro tweet. He was previously mocked about a tweet he posted about his wife's opinion of Cardi B's song "WAP," but that was a real tweet:

Listen, guys. I fully explained on the show that it's misogynistic to question whether graphic descriptions of "wet-ass p****" is empowering for women. "WAP" is obviously an incredibly profound statement of women's empowerment, a la Susan B. Anthony. https://t.co/KKYerf1dGW