Is the Illinois governor making vaccine mandates without any proof of the delta variant of the coronavirus? No, that's not true: This claim is a recycled version of similar deceptive claims made in Ireland, where COVID denialists requested lab materials from the wrong office, got a letter saying the agency had no samples, and used that letter to declare no virus existed. In this case, the demand for lab records and samples was sent to the administrative Office of the Governor, which is not a laboratory. The Office of the Governor is making decisions based off scientific data from the labs of the Illinois Department of Public Health, according to his spokesperson.

The claim appeared from an Instagram post (archived here) where it was published on October 20, 2021. The post is a picture of a Freedom of Information Act (FOIA) request being answered by the Illinois' governor's office. The post's caption read:

ILLINOIS GOVERNOR'S OFFICE HAS IS NO RECORD of a Scientific laboratory test, under a microscope, analyzing & identifying the 'vid'-!9 d€lta [email protected]@nt viru$ from isolated samples extracted from a human being! How than can decision, and mandates be made based on it? How are they saying people caught the D€[email protected] ????!! 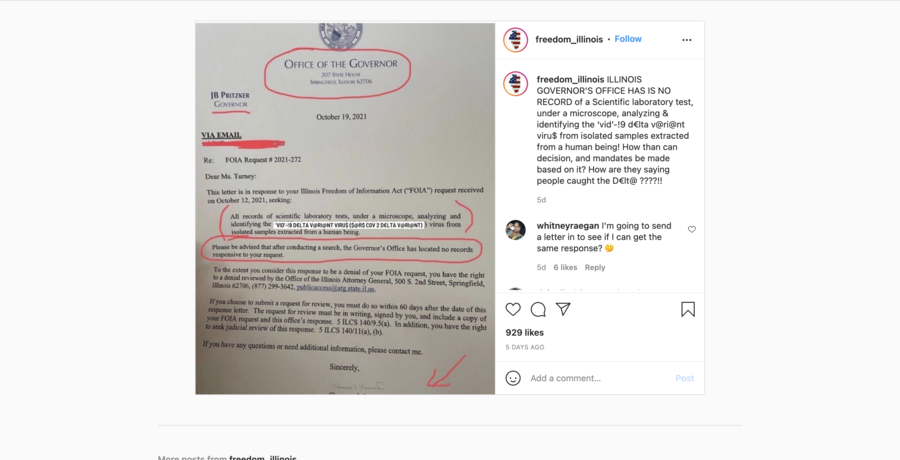 Lead Stories emailed the office of the governor where the scientific information to determine mandates was held, a spokesperson for the office responded on October 22, 2021 with:

The Illinois Dept of Public Health is where that information is kept.

It is unlikely the Office of the Governor could hold the records, much less the staff and lab equipment of the agency that tests and tracks COVID infection. The Office of The Governor has 97 employees and a budget of $12.8 million. The Illinois Department of Public Health is 11 times bigger, with 1,100 employees and an annual budget of more than $600 million. The Health Department has headquarters offices in Springfield and Chicago and operates three labs and seven regional offices around the state.

As one of the 50 United States, Illinois also has access to the lab data collected by the Centers for Disease Control & Prevention.

Lead Stories asked the Office of the Governor's spokesperson to confirm if the FOIA request shown in the post was real, but received no response. We have also contacted the Department of Public Health's FOIA office, as well as the FOIA contact for the governor's office. When they respond, we will update this fact check as appropriate.