Is former professional basketball player Earvin "Magic" Johnson being allowed to continue playing basketball after testing positive for human immunodeficiency virus (HIV) comparable to current professional basketball player Kyrie Irving's restrictions due to his opposition to get vaccinated against COVID-19? No, that's not true: This claim is missing significant context as HIV is not transmitted the same way COVID is. "You can play basketball, other sports, socialize with people and groups, and you do not spread HIV," whereas "SARS-CoV-2 is much different," the executive director of the Robert J. Havey, MD Institute for Global Health at Northwestern Univesity told Lead Stories. 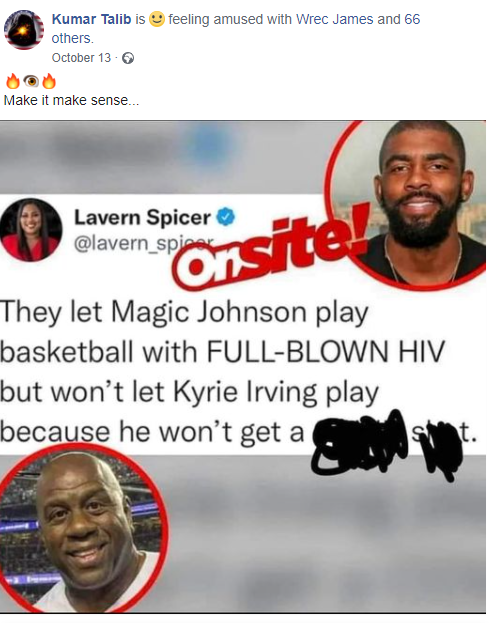 This is the original tweet, published by Republican congressional candidate Lavern Spicer on October 12, 2021.

The recent controversy surrounding criticism from conservative politicians follows the decision of Brooklyn Nets star player Kyrie Irving to not get vaccinated against COVID. The consequence for not being vaccinated as an NBA employee includes major restrictions for all players.

However, the implication this post makes is that former Los Angeles Laker Johnson, who found out during a physical that he was HIV positive during the 1991-92 season, could have spread the virus the same way Irving and any other players who choose not to be vaccinated could spread COVID.

Dr. Robert Murphy, executive director of the Robert J. Havey, MD Institute for Global Health and the John P. Phair Professor of Infectious Diseases at Northwestern University, said in an October 20, 2021, email, to Lead Stories about the claim:

You can play basketball, other sports, socialize with people and groups, and you do not spread HIV. You spread HIV by having sex with them or share a needle and use drugs together.
SARS-CoV-2 is much different, you only need to be within 3 feet of a person with active disease and you can catch it. You don't even need to touch the person, and you can get covid-19. That's because it is spread in respiratory droplets which you breathe out constantly. For HIV, you have to exchange blood, semen or vaginal fluids.

For transmission to occur, the HIV in these fluids must get into the bloodstream of an HIV-negative person through a mucous membrane (found in the rectum, vagina, mouth, or tip of the penis); open cuts or sores; or by direct injection.

The Centers for Disease Control and Prevention also lists ways in which HIV is not transmitted and how COVID spreads.