Did eight children with uncanny resemblances to the cast members of the TV series "M*A*S*H" pose together to recreate a cast photo? No, that's not true: This photo is a digital manipulation. The clothing and setting in the two images matches almost perfectly with nothing but the adult actors' faces changed to younger-looking versions of themselves. Although there are several ways this effect could be achieved, a second photo of the cast taken at the same sitting points to this having been done using the second cast photo and a "make me young" face-morphing app.

The meme was posted on Facebook on October 14, 2021. The caption with the meme reads:

CHECK THIS OUT!
A group of kids recreated the "MASH" cast photo! 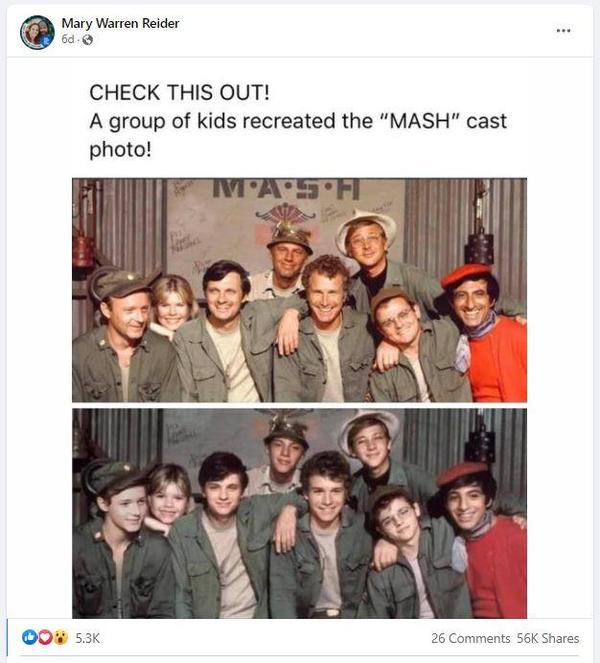 Aside from the apparent age of the faces and the color saturation, the two pictures used in the meme are very similar. Lead Stories used Photoshop to duplicate the bottom image (outlined in blue) to create a test layer over the original cast photo. We set the opacity of the test layer to 50% to see if the photos aligned. It was possible to match up any area almost perfectly with the corresponding area of the other photo, but not to align the entirety of the photo at the same time. It seems that one of the pictures in the meme may have been stretched, causing the slight offset. In the screenshot below the test layer is adjusted so the hands in the center align with the original. 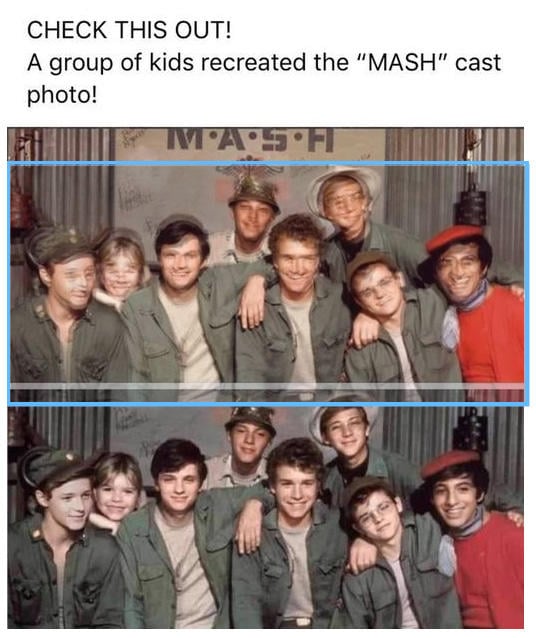 It was clear that only the faces of the actors had been changed, their clothing was identical in every way, right down to the crumples of the shirt pocket flaps. Some of the poses were changed just slightly between the original photo and the one with the children: the tilt of Loretta Swit's head, the direction Alan Alda is looking, Gary Burghoff's expression. This raised questions about how this digital manipulation was accomplished and where the look-alike children's faces came from.

As Lead Stories continued to look into this with reverse image search, we encountered a second photo from this cast portrait session on rottentomatoes.com. This time the poses of the children from the meme matched the pose and expression of each adult actor seamlessly. There are several apps that can morph facial features to make a person in a photo look older or younger, and it appears that the actor's faces in this "M*A*S*H" cast photo were modified with such an app. 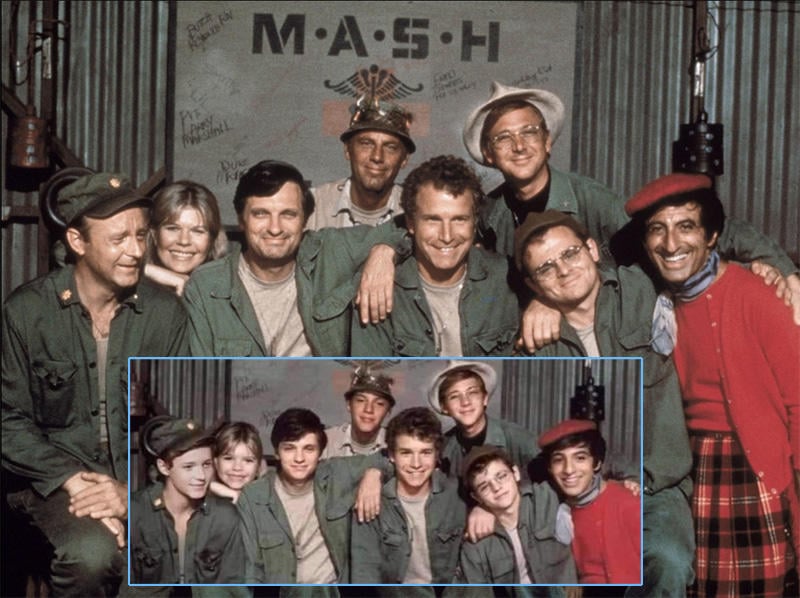 On October 25, 2021 Lead Stories was contacted by Larry Vaught, the person who had originally created the age-adjusted image from the M*A*S*H cast photo. Vaught said he used FaceApp to do the face transformations one face at a time, and then patched them back into the group photo using Photoshop. In the case of Radar and Frank, he sourced faces of those actors from other images which he felt produced a better result. He had shared the altered picture in the facebook group M*A*S*H Memories on October 3, 2021 and the post he made did not claim it was a group of children, someone else was responsible for that sometime after.

This is not the only cast photo Vaught age-transformed with FaceApp, he also made one for the cast of Doctor Who, and one of the original Star Trek cast picture from Star Trek VI: The Undiscovered Country.