Did Spain's high court confirm that COVID-19 does not exist? No, that's not true: The Spanish Ministry of Health was not taken to court, there was no hearing and the "proof" offered is an informational reply letter the government issued to the public to answer a question from a COVID-denier group. The government agency does NOT say that the virus has not been isolated -- it has been isolated -- they stated that they do not have laboratories where they can perform the tests but other Spanish laboratories have isolated the virus.

The claim appeared as an article (archived here) where it was published by the vicgeorge.net website on October 10, 2021, under the title "SPANISH HIGH COURT CONFIRMS THAT COVID-19 DOES NOT EXIST". It opened:

Spain is the 9th country to take the health minister to court, asking for PROOF that the COVID-19 virus exists. However, all health ministers FAILED to come up with the evidence because the virus DOES NOT EXIST. 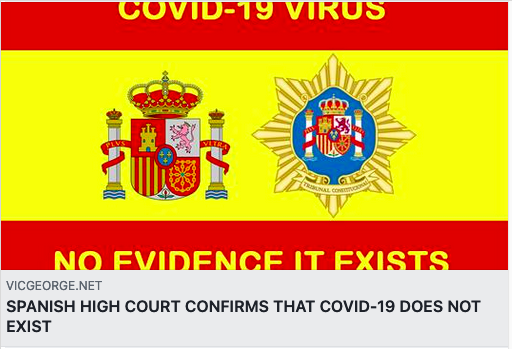 The article is based on a 10-minute video posted by Charlie Ward, a conspiracy theorist who peddled false information about Joe Biden's 2021 inauguration, which Lead Stories previously debunked here.

He claims a court document proves that the Spanish Ministry of Health was taken to court and admitted that its laboratories were not able to provide a SARS-CoV-2 virus sample because the virus does not exist.

The claims in the article and in Ward's video are false. The Spanish Ministry of Health was not taken to court and did not fail to appear in court either. Ward is referring to a letter that was released as a request for public information by the Ministry of Health to the COVID-denying Liberum Association and Biologists for Truth. The letter can be found here (archived here) and is signed by the general director of Public Health, Pilar Aparicio Azcarraga, and not a judge nor a court official. The COVID-denying organizations asked for a sample of the isolated SARS-CoV-2 virus to do an independent test.

This is standard government protocol in Spain -- public entities are able to ask a question and the agency responds via public letter. The Ministry of Health response said that the agency did not have the necessary facilities or laboratories to conduct SARS-CoV-2 isolation. It did not say that COVID-19 does not exist.

The Ministry of Science confirms to Newtral.es that the coronavirus has been isolated in its attached centers. "SARS-CoV-2 has been isolated and cultivated at the National Microbiology Center of the Carlos III Health Institute (CNM-ISCIII). Also, the National Center for Biotechnology of the CSIC has different isolated viruses or samples for a large part of the variants that have appeared," they explain from the ministry."