Was former New York Gov. Andrew Cuomo sentenced to death by the U.S. military after being found responsible "for the needless deaths of thousands of senior citizens" in New York state? No, that's not true: A Pentagon duty officer told Lead Stories that this claim was "a fabrication" and "completely inaccurate." Military tribunals have no jurisdiction over civilians.

On Monday afternoon, former New York Governor Andrew Cuomo learned his fate, having been held responsible for the needless deaths of thousands of senior citizens who perished during the first wave of a largely manufactured global plandemic. 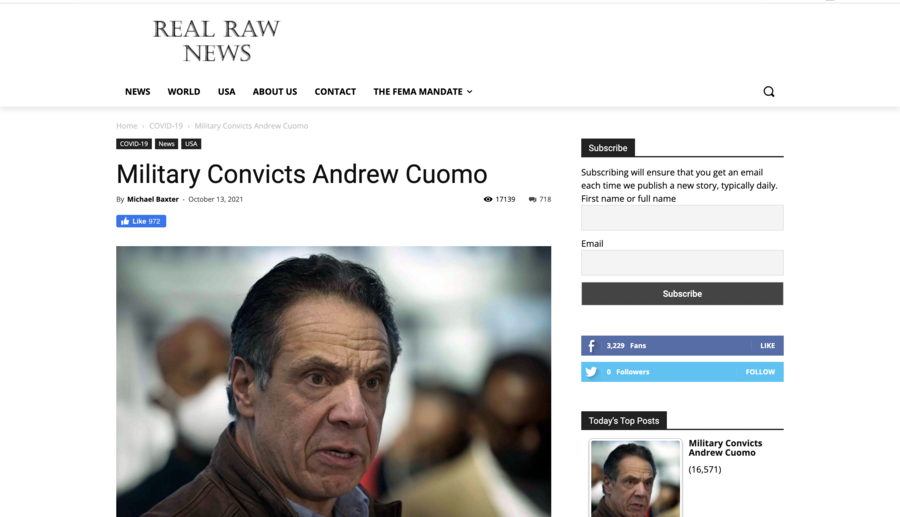 The article describes a fictitious sentencing hearing: "From the moment he entered the courtroom, Cuomo was combative, belligerent, and argumentative, hurling obscenities at both Rear Adm. Darse E. Crandall and the panel chosen to weigh the merits of the military's case against him. He admonished the Office of Military Commissions, calling it an affront to the criminal justice system and the 'American way of life.'"

A duty officer for the Pentagon's Defense Press Operations told us, "That claim is a fabrication and is completely inaccurate," in an October 15, 2021, email.

Real Raw News has a long history of publishing false claims in mock news stories, many of them about convictions and executions of various public figures at Naval Station Guantanamo Bay in Cuba. For example, the site reported former Secretary of State Hillary Clinton was hanged (she wasn't); former White House Chief of Staff John Podesta was executed (he wasn't); and "the military" convicted former Attorney General William Barr on charges of treason (it didn't).