Does asparagus cure cancer? No, that's not true: While asparagus could be part of an overall healthy plant-based diet to help lower cancer risks, it is not a miracle cure for cancer. This claim has been making the rounds for more than a decade and has been debunked many times. There is no scientific evidence supporting this. Yet it is still often widely shared. 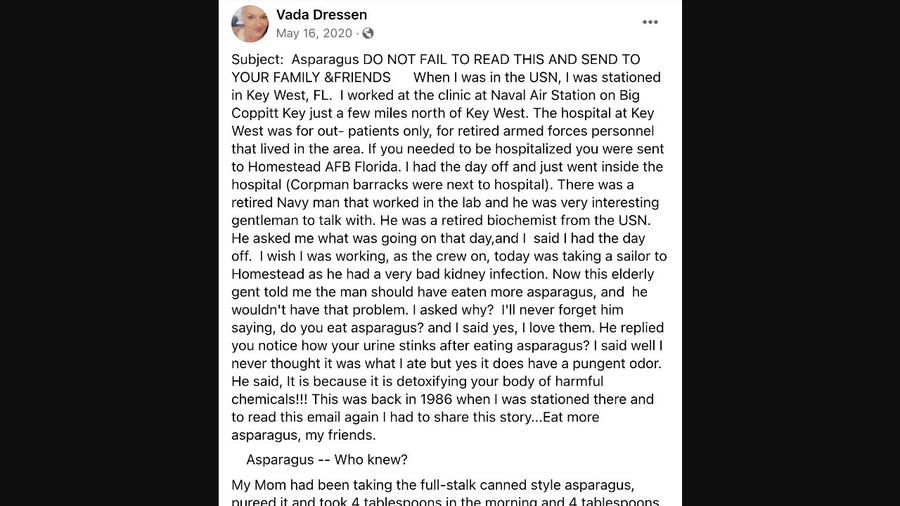 Lead Stories contacted Joe Schwarcz, the director of McGill University's Office for Science and Society, who wrote about this claim on March 20, 2017. Schwarcz told Lead Stories on the phone on November 19, 2021, that there are no studies that prove asparagus has "any effect on human cancer. ... [there is] no scientific evidence that asparagus could be effective in any way." He added that the burden of proof is on the claimant and it is up to them to design an experiment to show that it's true, which hasn't happened. As of our phone call, his article is still factual and current.

Schwarcz breaks down what he calls "the silly asparagus myth," that a daily dose of four tablespoons of pureed cooked asparagus can cure Hodgkin's disease, bladder cancer, lung cancer and advanced skin cancer within weeks. If there were such a miracle medical breakthrough it would be reported by reputable journals like the New England Journal of Medicine, he writes:

Cancer is not one disease, but many. Hodgkin's disease is not treated the same way as skin cancer or as lung cancer. So the chance that one single treatment, be it a pharmaceutical product, or asparagus, would be effective against such a diversity of cancers is essentially zero.

Lastly, he mentions that the one ingredient in asparagus that is said to be the super cure, glutathione, cannot be taken orally because it breaks down during digestion and never enters the bloodstream or gets to the cells where it is needed.