Does this collection of video clips prove people are suffering from harmful side effects of a COVID-19 vaccine? No, this video lacks enough context to show if these people were even vaccinated, or if their symptoms are related to the vaccine or simply to having an injection. The video offers no narrative or sourcing to accompany a rapid succession of clips showing people fainting or experiencing tremors or involuntary jerky convulsions, some of which may be the result of Functional Neurological Disorder.

Several of these videos have been covered by news media and previous Lead Stories fact checks. The video is watermarked and finishes with title credit to the streaming platform BANNED.VIDEO, operated by Alex Jones' company Free Speech Systems LLC. It has been copied and reposted on TikTok many times as evidenced by the layers of screen names that appear in the video's margin. The video has once again been published on TikTok, this time by wendyturbowings14 on November 1, 2021, under the title "Suffering VACCINATED SHARE YOUR STORY!!!" The text captioning on the video reads: 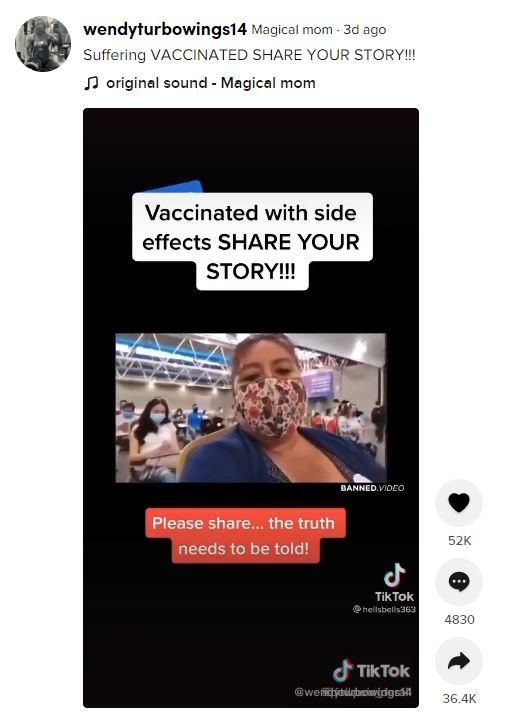 The collection of stills taken from the TikTok video pictured below, will help to identify video clips that will be covered in this fact check. Lead Stories was not able to identify the source of every clip.

This video begins with three clips of Maddie de Garay. It's not readily apparent that all three of these clips (outlined in yellow) show the same person; it seems they were filmed on different days. These clips appear in an ad paid for by the Vaccine Safety Research Foundation. This young woman from Ohio participated in an early vaccine trial. She began having pain and physical problems almost immediately after receiving the second dose of the vaccine. Her family has been vocal about her situation. In an interview with Tucker Carlson in July 2021 (at the 2:17 mark) Maddie's mother Stephanie de Garay says:

The only diagnosis we've gotten for her is that it's Conversion Disorder or Functional Neurologic Symptom Disorder and they are blaming it on anxiety. Ironically she did not have anxiety before the vaccine. And the problem that we had is this was noted in her records early on -- so any time she saw any new specialist, because it was all in the same hospital, they already had their diagnosis before they even saw her.

Carlson attempts to summarize what was just said. He misrepresents Functional Neurological Disorder, and implies that de Garay's doctors are saying it is all in her head:

So this is essentially the 19th-century hysteria diagnosis, it's her fault she's, she's ... they're basically saying she has emotional problems.

On January 19, 2021, the Functional Neurological Disorder Society issued a press release about some videos circulating on social media at that time. The press release begins:

We have become aware of a very small number of high-profile social media videos suggesting major neurological complications following vaccination against COVID 19. Whilst we do not wish to comment specifically on any case, we would state, as general comment, that many of the clinical features reported and observed on video in some cases are those of functional neurological disorder (FND). FND can be diagnosed with good accuracy from videos on social media where they are often confused with other neurological conditions.

Lead Stories reached out by phone to the Functional Neurological Disorder Society on November 4, 2021, to find out if the January statement was relevant to the types of symptoms visible in the TikTok video currently circulating. We were put in touch through email with Jon Stone, professor of neurology at the Centre for Clinical Brain Sciences at the University of Edinburgh in Scotland.

After reviewing the TikTok video, with the caveat that he was not offering a diagnosis, Stone did say that some of the types of movements displayed in a lot of the videos were distinctive for Functional Neurological Disorder. He also offered some links to learn more about the symptoms of this disorder (FND guide and the COVID-19 vaccine and FND).

FND can be triggered by physical and/or emotionally valenced events, including head injury, medical/surgical procedures, and vaccinations. These precipitating factors, while proximal to the development of the symptoms, are not directly caused by the substances in the vaccine in the same manner that, for example, Neisseria meningitidis is the cause of meningitis.

Another group of three video clips, those outlined in green, also show one person. This woman is identified as Kristen by the woman accompanying her and making the video. According to the narrator, Kristen began having symptoms "seven months ago," the symptoms went away and now have come back. Sitting outside the Kootenay Lake Hospital in Nelson, British Columbia, the narrator expresses her frustration at the lack of answers they are getting from the doctors, who say they have done all available tests and have no treatment to help Kristen.

Clip No. 1
This clip shows Tennessee nurse Tiffany Dover, one of the first frontline workers to be vaccinated, who fainted at a press conference shortly after receiving the injection. This clip appears twice in the TikTok video. Dover's fainting spell was caused by a overactive vagal response to having an injection, a problem she has a history with, unrelated to the COVID-19 vaccine itself. Lead Stories covered this on December 18, 2020. On December 20, 2020, Lead Stories debunked rumors she was dead.

Clip No. 2
This clip shows Tanja Erichsen, the head of the drug monitoring unit of the Danish Medicines Agency, who fainted at a press conference on April 14, 2021. Lead Stories wrote about there being no evidence to show that this fainting spell was connected to a vaccine. Erichsen posted an update on Twitter saying thanks for the concern and that she was recovered.

Clip No. 3
This clip shows Eva-Maria Holzleitner, a member of parliament in Austria, fainting while addressing parliament on October 12, 2021. There is no evidence that her fainting spell was connected to a vaccination. Some social media comments pointed to an Instagram post Holzleitner made more than three weeks earlier on September 17, 2021, as evidence that she was recently vaccinated. That post was not an announcement that she had been vaccinated that day: It was part of a unified statement made by four female politicians, from four different political parties, declaring, "We are vaccinated," and encouraging women and girls not to trust "fake experts" but to put their trust in real experts and "Please get vaccinated."

Clip No. 4
This clip may have originated in Japan. The captioning in Japanese that streams across the linked video does not describe the scene in the video clip, but a different incident (one that likely lacks video). It appears that an unrelated video had been attached to captioning about a different story in order to have video content. Lead Stories used a screenshot of the video's moving caption with an image text translation tool from Yandex to transcribe a search term that identified this unrelated Japanese news story. We were unable to find information about the video appearing in the clip.

Clip No. 5
This video was posted on infowars.com on July 2, 2021. No clear information is given about what happened to the man or where this was filmed -- only, "appearing to emanate out of Russia." The virality of this video clip seems to be based on the unfazed onlookers who do not leave their place in line even as a man is wheeled away on a stretcher. A still image taken from the video shows a bridge in the background. This bridge and the surrounding views identify this as the foot of the eastern side of the Krymsky Bridge in Moscow near the New Tretyakov Gallery. 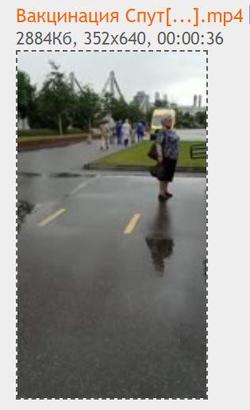 Clip No. 6
This clip shows a scene coincidentally captured in the background while a woman was being interviewed. This happened at a vaccine clinic for teachers in León, Guanajuato, Mexico, on May 4, 2021. When this video circulated on social media there were rumors that the woman who collapsed on the floor had died. Lead Stories published an article on May 12, 2021, debunking that claim and linking to Mexican press reporting that two teachers had fainted on the first day of the event, but were treated by the attending medical personnel and both recovered right there.