Is a drink containing sheep feces now in demand in China because it is high in protein and also can make a person high? No, that's not true: This spoof post includes genuine images showing a popular Taiwanese drink called bubble tea, or boba tea. This drink can be made to order with several choices of the type of tea and the type of bubbles. The sweet chewy balls are usually black tapioca pearls. Tapioca is made of starch from the cassava root. Not all bubble teas are made with tapioca pearls. Some colorful fruit-flavored "popping pearls" are made with a seaweed extract. Also, the animal in the spoof photo is a goat, not a sheep.

A 14-second video "pooing goat" was posted to YouTube on October 20, 2009. A still from the video was combined with a picture of a cup of bubble tea to produce the spoof image. An early example of that was posted on Twitter in 2019. The image resurfaced with a collection of other photos of black tapioca pearls, with people claiming that this was sheep feces. For example, this post published on Facebook by Enugu Tribune on November 26, 2021. It was captioned:

SHEEP FECES (Nsi Aturu) IS NOW A BIG MONEY.
Sheep feces is now in demand in China because of their richness in protein. It makes one High too.
I am afraid the Mpkurummiri takers may divert to this for Highness.
It's been mixed with juice, soya milk and other liquids. 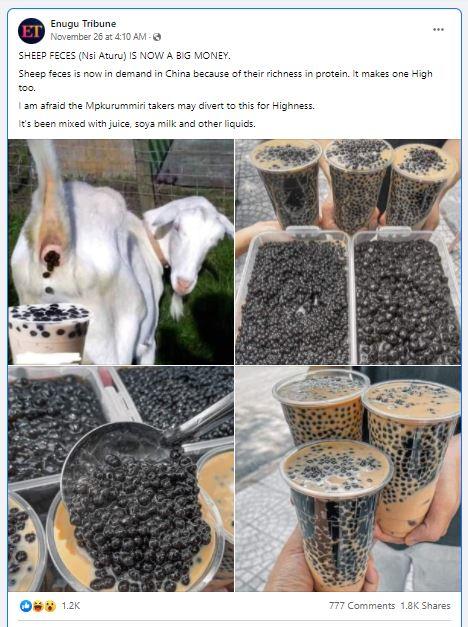 The three additional photos included with the spoof photo of the goat appeared in an Instagram post from a food blog by Young Tea & Coffee in Ho Chi Minh City, Vietnam. These photos show the containers of boba pearls that go into the drinks. The bubble tea drink originated in Taiwan in the 1980s and has since become popular around the world. In China more bubble tea is consumed than coffee.

Boba tea has some sugar and caffeine but there are no druglike compounds that would be like methamphetamine (called Mpkurummiri in the original post).