Was a green screen used to produce one of the more memorable images of rioters inside the U.S. Capitol building on January 6, 2021 -- with actors posing in another location and superimposed onto still and video images of the riot? No, that's not true: An image circulating online is a photoshopped prank composed of two different images after-the-fact. The central figure in the image with the horned fur Viking hat is Jacob Chansley, also known as Jake Angeli and as the QAnon Shaman. Chansley was photographed and videotaped throughout the day both inside and outside the Capitol building with numerous other people. There is no question that Chansley was inside the Capitol that day. He was arrested on January 9, 2021, and on September 3, 2021 he pleaded guilty to obstruction of an official proceeding. On November 17, 2021, he was sentenced to 41 months in prison. On November 30, 2021, after replacing his attorney he filed an appeal in hopes of reversing the guilty plea and prison sentence.

The image with the photoshopped green screen background has been circulating online since shortly after January 6, 2021 (examples here and here). The altered photo recently resurfaced in a post on Facebook on November 29, 2021, with the caption, "Interesting photo...". It was posted without any additional captioning other than the word, "Kek" which is part of the screenshot image. 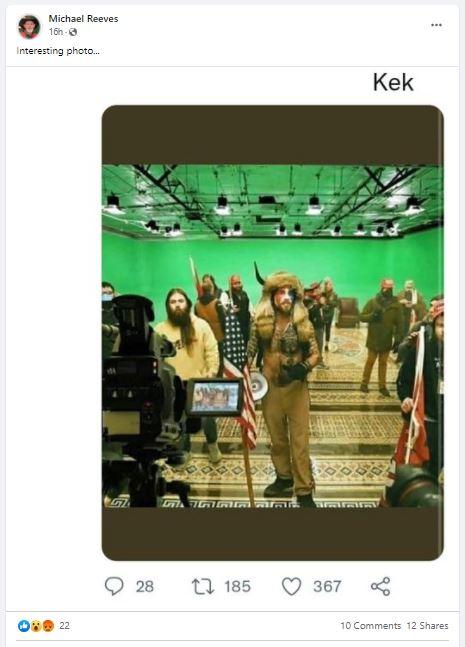 The word "Kek" in the upper corner is an indication that this meme is a prank. Kek is a slang word originating from 4chan and 8chan messageboards that can mean "LOL" or refer to the Meme God Kek.

The photo of the group of rioters who had entered the capitol building was taken by photojournalist Saul Loeb who described his experience working on assignment in the Capitol building in January 6, 2021, in an interview with rollingstone.com. A collection of Loeb's photos from that day can be found at gettyimages.com.

The image below shows the two images that were combined to make the green screen meme. 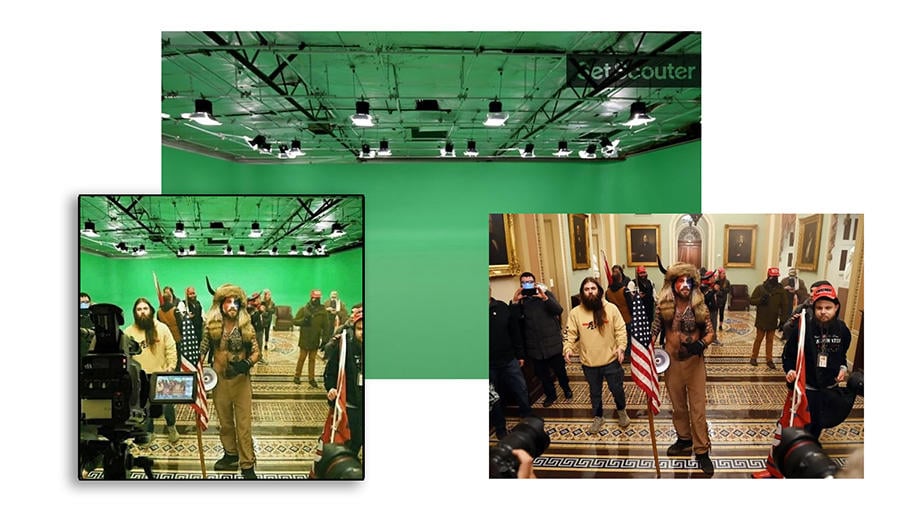 After the January 6 Capitol riot, Lead Stories debunked rumors that the people who stormed the Capitol were not Trump supporters, but were Antifacist activists. Another rumor circulated about the tattoo on the hand of the man in the yellow sweatshirt. This green screen meme ties in with another belief shared by QAnon conspiracists was that Joe Biden is not really the president and Oval Office scenes are filmed on a soundstage in California.