Were the late Barbara Bush and the late Betty White sisters? No, that's not true: There is no evidence that the former first lady and the actress were related. White was an only child while Bush had three siblings, and the two attended high school 2,207 miles away from each other.

Betty White is Barbara Bush's sister. The Bush's created the OSS/CIA and 322 Yale Skull and Bones. Barbara Bush and Betty White are the daughters of Aleister Crowley Barbara handled all the politicians for the CIA

Barbara was a man.

Betty was a woman. 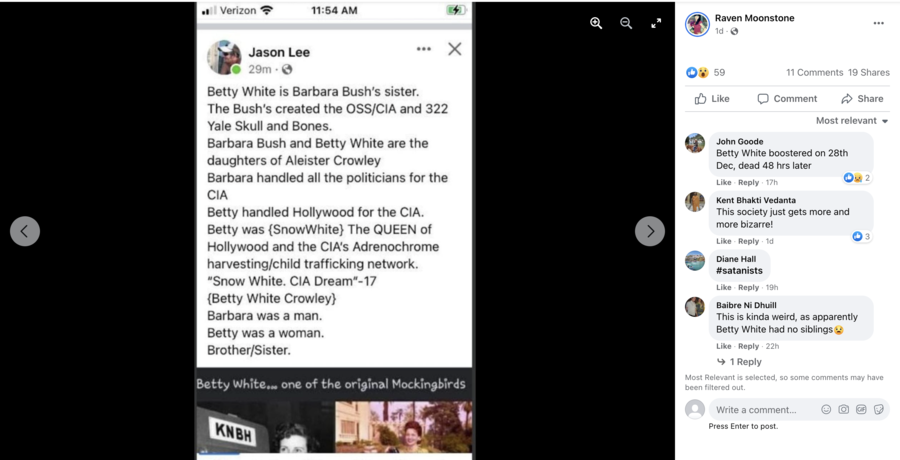 The post cites no source or evidence for its claims.

When Barbara Bush passed away in 2018, The New York Times obituary didn't list Betty White as one of Bush's living siblings or relatives.

She was born Barbara Pierce on June 8, 1925, at a maternity hospital in New York City ... She was the third child of the former Pauline Robinson and Marvin Pierce. Her father was in the publishing business and eventually became president of the McCall publishing company. Her mother, the daughter of an Ohio Supreme Court justice, was active in civic affairs in Rye, N.Y., the New York City suburb where the family lived.

One of Mrs. Bush's distant relatives was Franklin Pierce, the 14th president of the United States.

In an Associated Press article titled, "Betty White, TV's Golden Girl, dies at 99," White was quoted as having discussed her upbringing as an only child in a 2015 interview:

I'm an only child, and I had a mother and dad who never drew a straight line: They just thought funny ...

According to various articles and historical records about the two women:

Ashley Hall created a page for the late first lady, who graduated in 1943. Yearbook pictures show Betty White as a sophomore and senior at Beverly Hills High.

Between Ashley Hall and Beverly Hills High, there is a 2,207-mile distance separating the two schools.