Are COVID-19 vaccines full of exclusive nanotechnology to create a "slave species"? No, that's not true: Anti-vaccination group La Quinta Columna (The Fifth Column) provides no proof for its claims that COVID vaccines contain nanotechnology. Patents and ingredient lists for the vaccines do not show any of the "NanoRouters ... Nano-Antennas and Plasmonic Antennas" alleged to be in them.

The claims appear in an article and video (archived here) published by La Quinta Columna on BitChute on January 4, 2022, titled "*BREAKING NEWS: SHOCKING - HERE IS WHAT REALLY IS IN THE VACCINES." It opens:

Richard Delgado, founder of LA QUINTA COLUMNA - https://www.laquintacolumna.net - this is a great site to download the proof of what they found in the Vaccines.

All the vaccines tested (Pfizer, Moderna, Johnson&Johnson and AstraZeneca) all contain exclusive nanotechnology. We have found NanoRouters, which also emit MAC addresses that can be registered with bluetooth wireless technology by just using your mobile phone and the help of an App.

This is what the story and video looked like on BitChute on January 10, 2022: 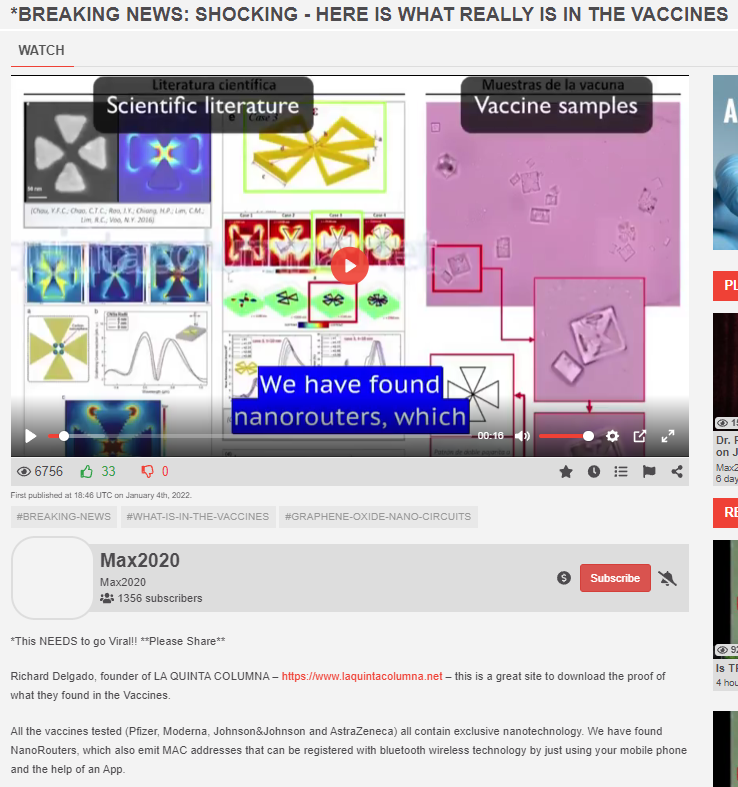 The video is narrated by Richard Delgado, founder of La Quinta Columna, which is overdubbed in English. The nearly 11-minute presentation is a laundry list of debunked conspiracy theories about COVID vaccines. After a brief introduction, Delgado lists, without providing evidence, the nanotechnology he says is included in them:

All the vaccines tested (Pfizer, Moderna, Johnson&Johnson and AstraZeneca) all contain exclusive nanotechnology. We have found NanoRouters, which also emit MAC addresses that can be registered with bluetooth wireless technology by just using your mobile phone and the help of an App.

We have found Nano-Antennas and Plasmonic Antennas for the amplification of these signals.

We have also identified Nano-Rectennas (which act as rectifier bridges of alternating/direct current), codecs and certain logic gates for the encryption of these nanocommunications emitted from the inoculated individual to a remote server.

A check of the government fact sheets for the four vaccines shows none of those nanotechnologies or electronic components are in them:

Lead Stories previously debunked claims of nanotechnology and tracking systems being included in COVID vaccines. In an October 8, 2021, tweet, the Food and Drug Administration dismissed the notion:

At the 50-second mark, the video begins a five-minute missive about another disproven claim -- that graphene oxide is in the vaccines. Anti-vaccine activists have repeatedly claimed, without credible evidence, that vaccine makers have added graphene oxide to vaccines as a means to control people as part of a secret plot for global dominion.

According to Delgado, all this nanotechnology is controlled through Bluetooth, mobile phones and the "help of an APP." At 8:10 into the video he says:

Moreover, this graphene oxide can be stimulated remotely and wirelessly, using for this purpose the implementation of the new 4G, 4G plus and 5G technology.

All vaccinated people send their data to an external server controlled by artificial intelligence (probably financed by Mr. Elon Musk).

This information provided is a synopsis of more than 20,000 hours of research, working with a multidisciplinary group of scientists and is based on the scientific discoveries in Dr. Campra's final technical report, which provides unequivocally conclusive evidence of the presence of reduced graphene oxide in samples of the vaccine produced by AstraZeneca, Moderna, Pfizer and Jansen (Johnson & Johnson).

Based only on the unsubstantiated claims in the video, Delgado predicts "a slave species, diminished and entirely dependent on these technocratic oligarchies."

Dr. Pablo Campra is a professor who specializes in lab biotechnology and horticulture as it applies to the climate. Lead Stories has previously debunked claims from him about graphene oxide, and the school he works for in Spain, the University of Almeria, has distanced itself from Campra's claims about graphene in COVID vaccines.

At about three minutes in, Delgado recycles the conspiracy theory that COVID vaccines and graphene oxide are responsible for making athletes collapse and in some cases die. Lead Stories previously debunked these claims (here and here).