Is humanity being held hostage by a new world order pushing COVID-19 vaccines? No, that's not true: The video in this Facebook post recycles previously debunked claims about COVID and plays into the rhetoric of an elaborate QAnon story of a cabal of blood-drinking elites working for global dominion.

The claims appear in a post (archived here) on November 16, 2021. Titled "BREAKING NEWS HUMANITY HELD HOSTAGE BY THE NEW WORLD ORDER," the narration at the end of the video identifies it as coming from Stranger Than Fiction News. The post opens: 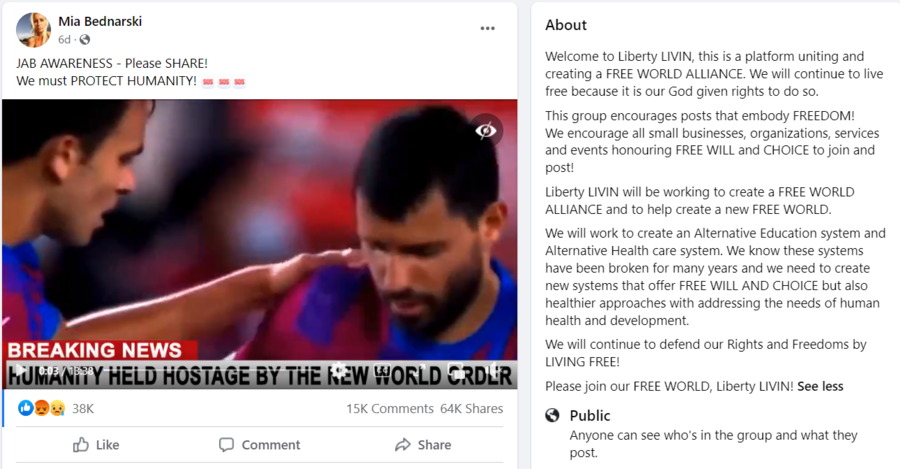 The narrator opens by saying:

The ominous words play over a disturbing video loop of athletes and politicians collapsing. None of the people Lead Stories was able to identify in the video clips were known to be sick with COVID, had received a vaccine or died following their collapse. Faintings after vaccinations are not unusual. The video clips are shown out of context, but include:

After its introduction, the video quickly launches into a laundry list of debunked COVID conspiracy theories about:

At 10:20 in the video, the narrator says all these claims are linked to a Satan-worshipping cabal, a QAnon conspiracy theory:

These people on television are cult members. They worship the devil. This is a giant blood sacrifice and if you don't get their death vax -- it's like the mark of the beast -- you can't buy or sell, you can't participate in society, you're no longer free.

Other "blood sacrifices" mentioned in the video include the deadly Astroworld festival in November 2021 and the mass shooting at the 2017 Harvest music festival on the Las Vegas Strip that killed 58 people. At 11:55 the video says:

They're killing people for the fun of it, for the sport, for entertainment, and until people wake up and realize that they're being targeted by a system of evil, things aren't going to get any better.

The video was posted in a public group on Facebook called Liberty LIVIN. This is what its "About" section says:

We will continue to defend our Rights and Freedoms by LIVING FREE!