Did a Michigan school district put cat litter boxes in school bathrooms for students who identify as "furries"? No, that's not true: The claim was made with no proof. The person who made the claim said it was something they had heard, not something they had seen. The superintendent of Michigan's Midland Public Schools said it was false and just a viral rumor.

The claim was made in a video published on Facebook on January 27, 2022 (archived here), under the title "This is the type of crap going on in Blue states 🐰🕳" 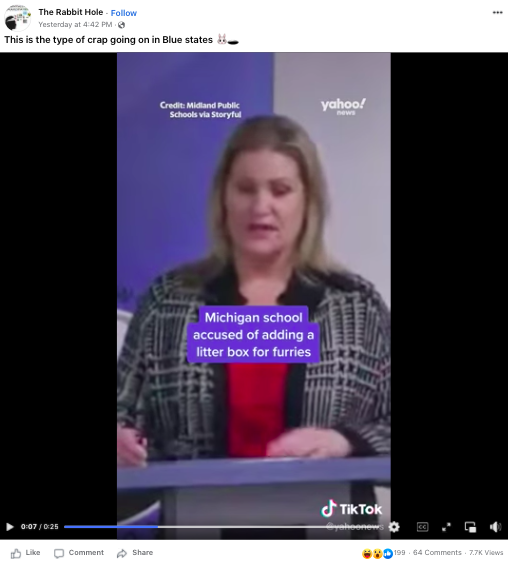 At just past the 33:50 mark in a video recording of a Midland (Michigan) Public Schools board of education meeting on December 20, 2021, Lisa Hansen claimed that:

She offered no evidence, including the person she heard it from nor the name of anyone else who had directly observed a kitty litter box in a public school. Lead Stories searched online, finding no report of a witness saying they saw it or photographed it.

Michael E. Sharrow, the superintendent of Midland Public Schools, wrote in an email: "Let me be clear in this communication. There is no truth whatsoever to this false statement/accusation! There have never been litter boxes within MPS schools." The email is posted on the Midland City/County Police/EMS Scanner Watch Group Facebook community website (archived here).

It looked like this at the time of writing: 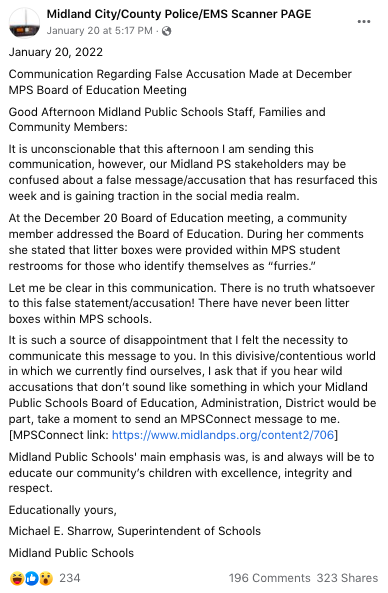