Do 22 million illegal immigrants live in the United States, receive public benefits and vote illegally? No, that's mostly false: Two experts in public policy told Lead Stories that the number of illegal immigrants in the United States is closer to 11 million. Because they are not citizens, they cannot qualify for most public benefits and cannot vote in most elections. However, there are a few benefits undocumented citizens are allowed to receive as well as some local elections where they are allowed to vote. 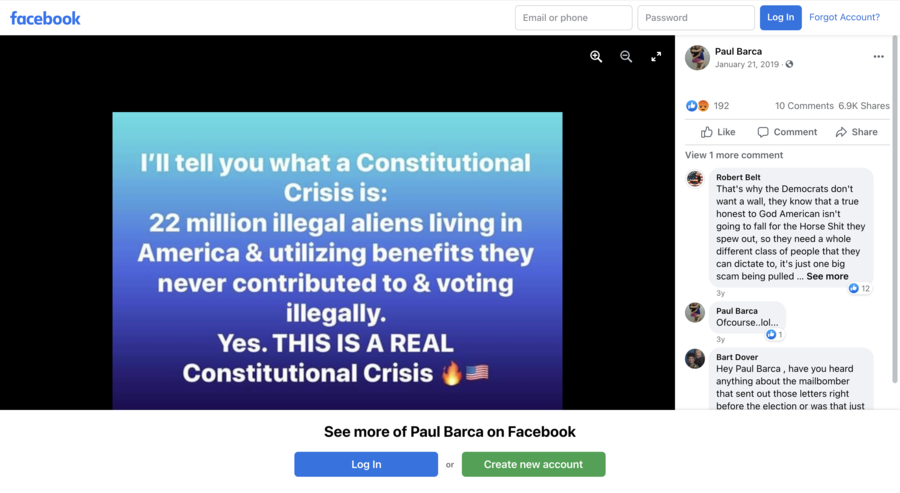 Senior policy analyst at the Migration Policy Institute Julia Gelatt told us in a January 27, 2022, phone call that the Institute estimates that "there are 11 million unauthorized immigrants in the United States." She said there would be a lot more births, deaths and children in schools if the correct number of undocumented immigrants were 22 million. That number is independently corroborated by the Pew Reseach Institute.

The number of unauthorized immigrants found voting illegally is "a tiny, tiny number, like maybe one every few years," she said. She said in years recent to 2022 some cities are allowing undocumented immigrants to vote in local elections.

Ann Chih Lin, an associate professor of public policy at the University of Michigan, emailed Lead Stories on January 27, 2022 to say:

Unauthorized migrants are expressly prohibited from receiving individual government benefits, such as welfare or Medicaid ... In terms of voting, neither the federal government nor any state government in the US currently allows immigrants, legal or illegal to vote. However, some local governments do allow non-citizen immigrants to vote.

However, Lin told us there are four ways unauthorized immigrants can receive services that the federal, state and local governments provide. First, the federal government funds some clinics in impoverished areas and those clinics do not ask for legal status when providing their services. Second, the Special Supplemental Nutrition Program for Women, Infants, and Children, or WIC, provides nutrition supplements for women and children regardless of citizenship.

Third, students who qualify for free or reduced-price lunches are not asked for their legal status when applying for these specific lunches. Finally, the Supreme Court ruled in Plyler v. Doe (1982) that all students residing in the U.S. are entitled to attend K-12 schools, regardless of their legal status.

Lin agreed that the number of unauthorized immigrants is about 11 million.

Lead Stories reached out to the U.S. Citizenship and Immigration Services sector of the Department of Homeland Security. We will update this story if they respond to our query.