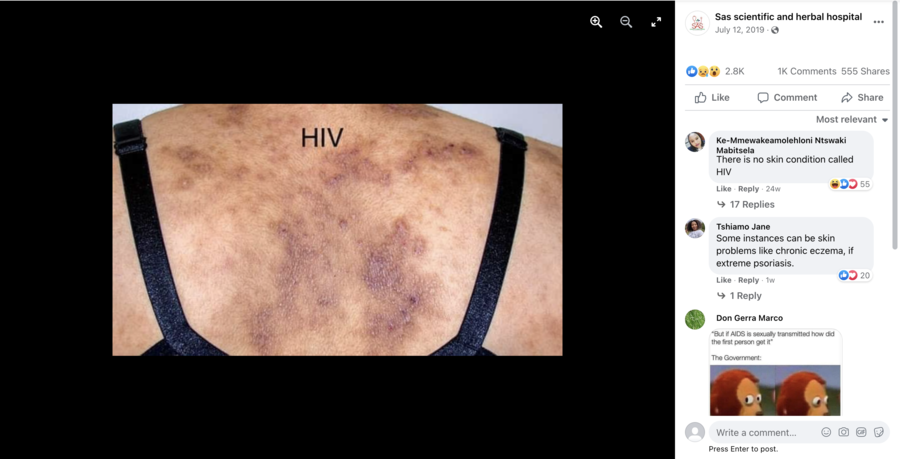 Lead Stories conducted a reverse image search on Google, which showed the picture originated on the website DermNet NZ.

Lead Stories asked if he saw patients with eczema who are HIV-negative, Radusky said:

All the time. The takeway from the photo in question should not be that this is a representative photo of HIV. It is not. To clarify, HIV refers to the virus, the human immunodeficiency virus. Viruses don't look like rashes nor do they write themselves as such on our body. They are microscopic. Now, viruses can certainly cause skin rashes. We know from decades of studying the human immunodeficiency virus that many types of skin rashes and lesions can be seen as a result of infection, some of which are associated with a challenged immune system, such as in AIDS (Acquired immunodeficiency syndrome). Patients who are HIV+ can experience many itchy rashes that are similar in appearance to eczema.

Eczema on a person's back is very common, he added.

The National Institute of Allergy and Infectious Diseases explains:

Eczema, or atopic dermatitis, is an inflammatory skin condition that affects an estimated 30 percent of the U.S. population, mostly children and adolescents. It is a chronic disease characterized by dry, itchy skin that can weep clear fluid when scratched. People with eczema also may be particularly susceptible to bacterial, viral, and fungal skin infections.