Did Bill Gates say that he has a company trying to make a coronavirus outbreak and that they were successful? No, that's not true: This video is an altered fabrication. While Gates did say these words and phrases in an interview, several short snippets were taken out of context and spliced together to produce a fake quote.

The original Marques Brownlee interview with Bill Gates was posted on YouTube on February 14, 2020. The video was altered by splicing several small segments to create the appearance that Gates said things he never said in the original video. This altered video was posted by several TikTok accounts and then was posted on Facebook by Holiday Cooley on November 22, 2021. The caption on the video reads: 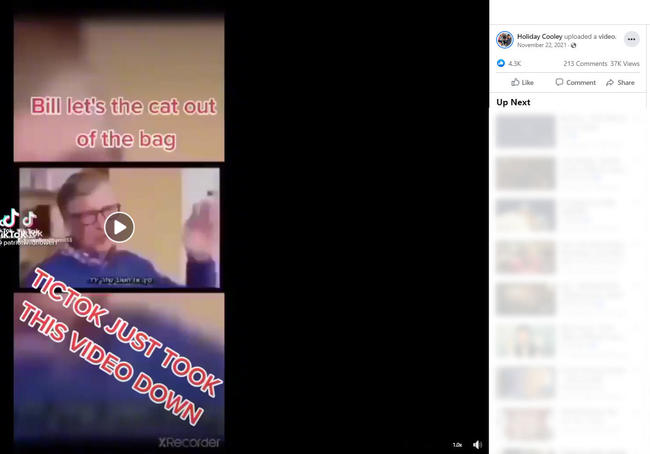 In this 26-second-long edited video, several small sentence fragments have been put together to create the following fake exchange:

Gates: China's it's important for that to come down.
Brownlee: Hopefully zero
Gates: That will come to zero. So, I have a company that's trying to make a coronavirus outbreak and uh, it succeeded, although nowhere near as good as we want it to be.
Narrator: It was at this moment that he knew he f - - - ed up.

The original video interview titled, "Talking Tech and 2020 with Bill Gates!" was posted on the Marques Brownlee YouTube channel on February 14, 2020. The interview covered several topics, but was mostly about electric cars. Near the end Brownlee asks Gates about when he answers his email. In the video embedded below, cued to play at the 11:28 mark, Gates is explaining how important it is to him to answer his email in a timely manner. It is this segment of the original interview that was used to capture Gates saying the words "Coronavirus outbreak." As Gates speaks, he gestures with his left hand:

Today I got mail about this coronavirus outbreak and how should the foundation step up and do something. I'm glad I was there to give a really quick, 'Yes!' response.

Additional timestamps of the other phrases that were taken out of context, shown in bold, which were used to construct the hoax video: