Did Canada's Ontario Provincial Police (OPP) and Royal Canadian Mounted Police (RCMP) report "2.3 Million People On Foot And Upwards To 150,000 Truckers" were present at a recent COVID-19 vaccine mandate protest? No, that's not true: A representative of the OPP told Lead Stories, "This information is false." A spokesperson for the RCMP told Lead Stories that the agency "has not provided any estimate on numbers of vehicles or demonstrators in relation to the demonstrations in Ottawa."

The claim appeared in a Facebook post (archived here) on January 29, 2022. Above what appears to be a screenshot of cellphone texts, the caption opens:

Oh My I cant believe it
I know their is a shit ton of people here and that were expected but WOW
2.3 MILLION PEOPLE ON FOOT AND UPWARDS TO 150,000 TRUCKERS

The text in the image in the post reads:

The OPP have reported over 100,000 trucks in Ottawa, an estimated 2.3 million on foot and an 'abudance' of trucks parked in fields just outside of the city. 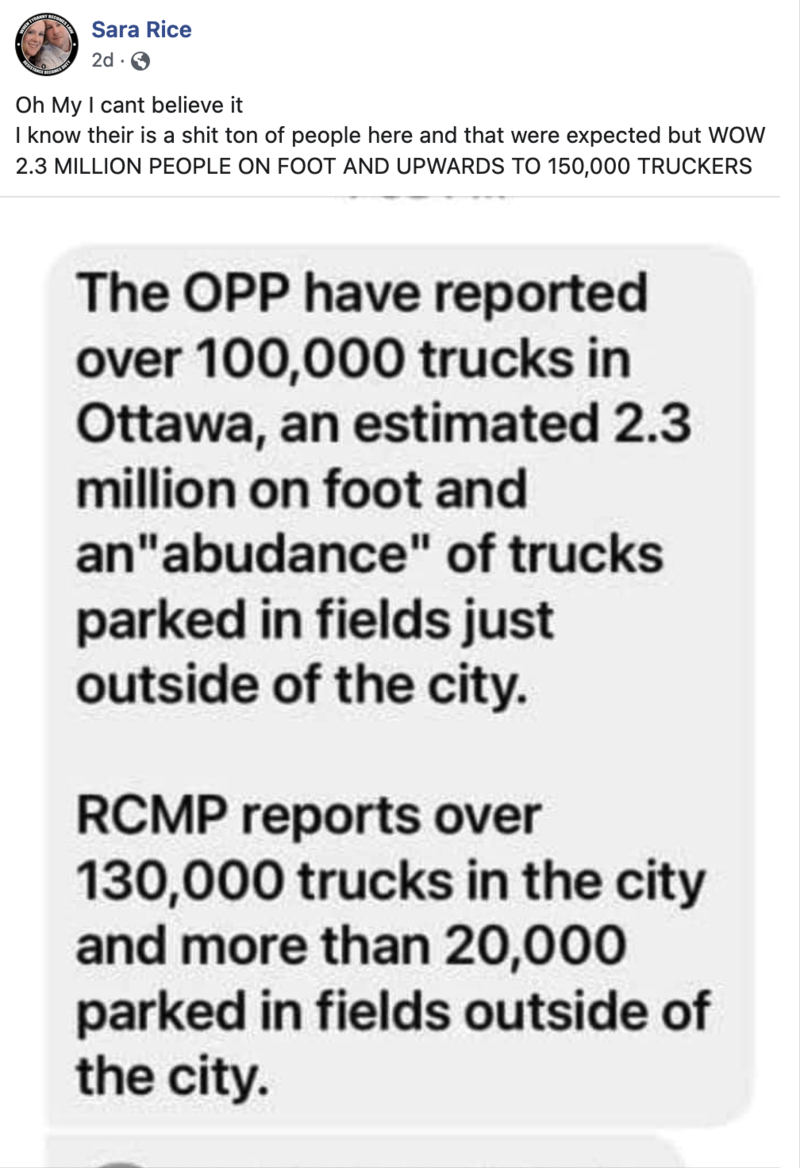 The demonstration the post is talking about follows recent mandates established by Canada and the U.S. that say travelers, including truckers, who are not fully vaccinated against COVID are not permitted to cross the borders to enter the country.

Representatives of the RCMP and the OPP say they have released no numbers concerning the claims made in this post.

In an email to Lead Stories on February 1, 2022, Sgts. Tylor Copeland and Kerry Schmidt of the OPP said of the post:

The OPP have not released numbers of participants at any point. This information is false.

In a separate email to Lead Stories on February 1, 2022, a media relations representative for the RCMP National Division said of the numbers in the post:

We can confirm that the RCMP has not provided any estimate on numbers of vehicle or demonstrators in relation to the demonstrations in Ottawa.

The Canadian Trucking Alliance also published this January 22, 2022, statement regarding the road and border protests, noting that "the vast majority of the Canadian trucking industry is vaccinated with the overall industry vaccination rate among truck drivers closely mirroring that of the general public."