Was the on-air spell suffered by German reporter Clara Pfeffer caused by the COVID-19 vaccine, as some social media posts suggest? No, that's not true: Pfeffer became disoriented during a live broadcast of the RTL News morning show, "ntv-Frühstart" ("Early Start"). She recovered soon after.

Later that day she wrote in a tweet that in the future she would have a proper breakfast before the show. When asked about speculation that the spell was associated with a vaccination, an RTL spokesperson said that any connection with a corona vaccination was out of the question.

The footage of Pfeffer becoming disoriented and losing her balance while speaking came during a live broadcast of the show at 7:44 a.m. local time on February 15, 2022. Screen-capture video and stills showing the moment Pfeffer became disoriented were soon posted on social media. One example posted on Facebook on February 16, 2022, without any caption or explanation had English subtitles added to the bottom of the recording. The subtitles say:

Interviewer: 'So you are saying we should only activate mandatory vaccination as soon as it will be vital? Won't it be much too late then?? Erm..we have to...erm..*unintelligible*
Camera Man: 'Are you okay?'
Anchor: 'I think we should stop here. At this point we will continue with a different topic. As you see our colleague is not feeling well.' 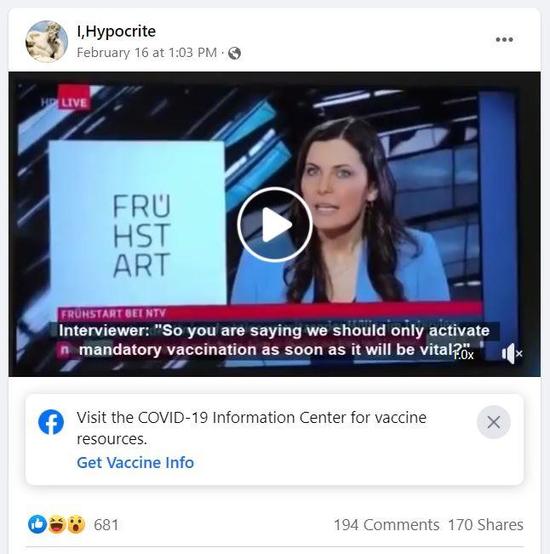 On February 15, 2022, after the incident on the morning broadcast, Pfeffer posted a two-part tweet (archived here) thanking everyone for the well wishes and giving special thanks to Sepp Müller, a member of Parliament for Dessau-Roßlau, who was the guest she was interviewing at the time. The tweets translate to say:

Thank you so much for the many get well wishes! I'm feeling much better now and I'm going to recover for now. And in the future, have a proper breakfast before the 'Early Start'. The team here in the capital city studio and also in Cologne immediately took care of everything. 1/2

Thanks also to @SOSchwetje and @DanielSchueler who assessed the situation correctly and have my back. Special thanks also to @mueller_sepp, you responded really well!

Lead Stories staff in Berlin reached out to RTL Deutschland to ask for clarification due to the online speculation that Pfeffer's spell was caused by a COVID-19 vaccination. RTL's spokesperson replied by email on February 17, 2022, saying that any connection with a COVID vaccination was out of the question.

A February 17, 2022, rtl.de article titled, "A moment of shock at the RTL / ntv early start: presenter Clara Pfeffer suffers from a fainting spell - Talk guest Sepp Müller reacts immediately and rushes to her aid" describes what happened and that Pfeffer is now doing well again.

In the meantime there is also good news from Pfeffer herself: 'I'm feeling better again, I'm stable'. The colleagues reacted quickly and immediately called an ambulance. The paramedics examined her. 'Everything is fine, that was probably a fainting fit.' One question earlier, Pfeffer had noticed that she was not doing so well. 'And then I was gone for a minute or two'. In retrospect, she could hardly remember the situation.

The journalist also expresses special thanks to studio guest Sepp Müller. 'He reacted really well and caught me.' The CDU politician stayed with her and waited for the ambulance to come. Pfeffer also thanked her colleagues: 'I am grateful for my nice colleagues, who reacted immediately and took care of me in the best possible way.'

The article features a photo of Pfeffer and Müller on the "Frühstart" set, which shows something not evident in the short video clip -- that Pfeffer and Müller were standing several feet apart when the incident occurred, and his quick action likely prevented her from falling down. 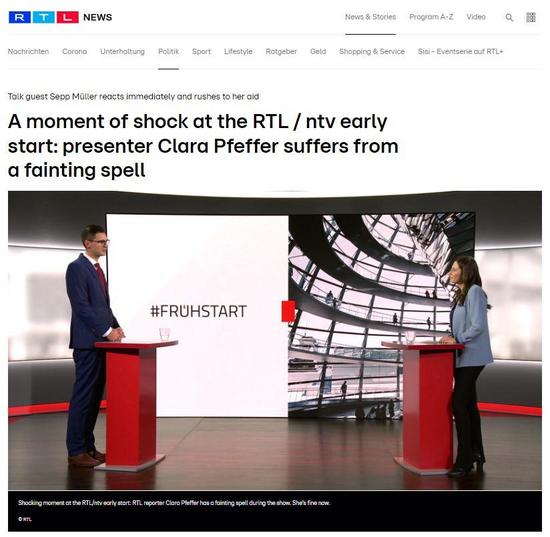