Are COVID-19 vaccines experimental gene technology that is still under development? No, that's not true: The Medicines and Healthcare products Regulatory Agency (MHRA) in the United Kingdom says none of the vaccines authorized in the U.K. -- AstraZeneca, Pfizer and Moderna -- are experimental. All have gone through a "thorough review of safety, quality and efficacy information from clinical trials" before authorization, according to the agency. Other agencies echo that, as Lead Stories has written about previously.

The claim appeared in an article (archived here) published by British-based The Daily Sceptic on February 7, 2022, under the title "Why Weren't These Vaccines Put Through the Proper Safety Trials For Gene Technology, Asks a Former Pharmaceutical Research Scientist." It opened:

I joined Beecham Research Laboratories in 1970 as a pharmacologist/endocrinologist charged with discovering new anti-fertility 'drugs'. My team came close but ultimately failed in this endeavor but as is the norm in the discovery of pharmaceuticals we made the serendipitous discovery of an anti-inflammatory compound which became a very successful effective-and-safe treatment for the symptomatic relief of patients with chronic degenerative joint diseases. We jested amongst ourselves that drug discovery was 'like looking for a needle in a haystack and finding the farmer's treasure'. To outsiders, it was of course a case of 'chance favouring the prepared mind'. 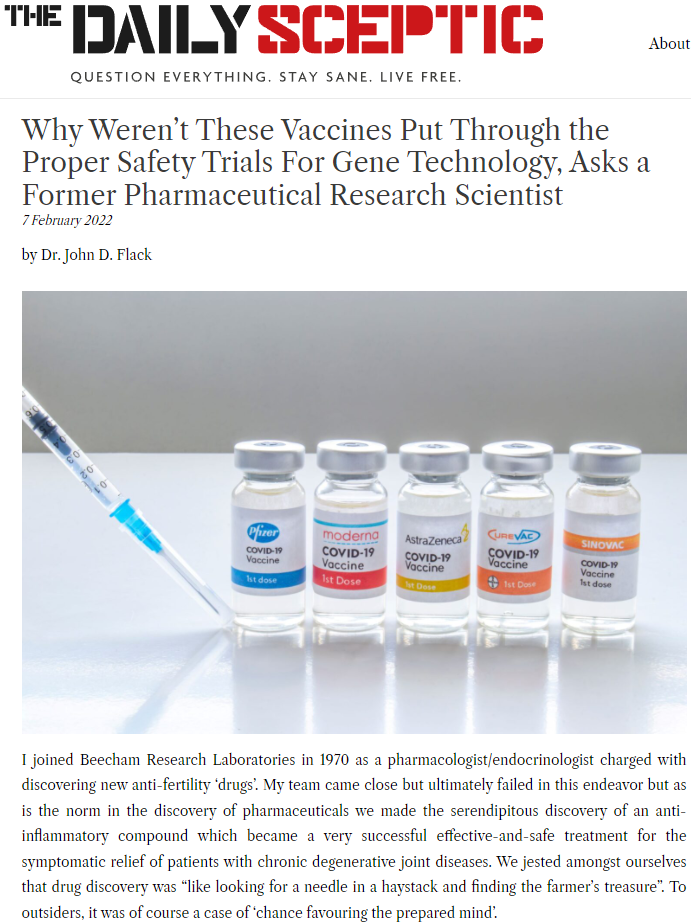 The author of the article is John D. Flack, a retired pharmaceutical research and development scientist. Lead Stories found his profile on a website for the group HART (Health Advisory & Recovery Team). This is how the organization describes itself:

HART is a group of highly qualified UK doctors, scientists, economists, psychologists and other academic experts. We came together over shared concerns about policy and guidance recommendations relating to the COVID-19 pandemic.

We continue to be concerned about the lack of open scientific debate in mainstream media and the worrying trend of censorship and harassment of those who question the narrative. Science without question is dogma.

In his article, Flack argues that COVID vaccines haven't been properly tested, particularly the mRNA vaccines made by Pfizer and Moderna, calling them experimental gene technology that needed more testing before being released to the general public. In a February 10, 2022, email to Lead Stories, the MHRA, which regulates medicines, medical devices and blood components for transfusion in the U.K., said that's not the case:

The University of Oxford's Vaccine Knowledge Project webpage explains how vaccines are tested, licensed and monitored in the U.K.:

Understandably, people are often concerned to know how rigorously and extensively vaccines have been tested. This is especially true for new vaccines. This page aims to outline the process involved in developing and licensing a vaccine for use in the UK. The standard for testing and monitoring of vaccines is higher than it is for most other medicines, because they are one of the few medical treatments given to healthy people (mainly healthy children). This means that the level of acceptable risk is much lower than it might be for a cancer treatment, for example.

Additional details on the process are also available here.

All the COVID vaccines went through three phases of clinical trials before being approved by regulatory agencies. And while the vaccines are authorized, they're still under trial for about three years after being given the OK. The Pfizer vaccine has an "estimated study completion date" of May 15, 2023. Studies for the Moderna shots are expected to end on October 27, 2022.

Vaccine manufacturers are required to report adverse events to regulatory authorities, including U.K. and European health organizations, as well as the Vaccine Adverse Event Reporting System (VAERS) in the United States, which is run by the Centers for Disease Control and Prevention and the U.S. Food and Drug Administration.

Some vaccine-hesitant people like Flack are promoting the idea that mRNA-based vaccines, including the Pfizer and Moderna vaccines, are a form of gene therapy, but this isn't accurate. The U.K.'s National Health System explains it this way:

Gene therapies involve making deliberate changes to a patient's DNA in order to cure or alleviate a genetic condition. This can be by adding a functional copy of a gene, disabling a gene that makes a faulty product or changing gene activation.

The mRNA from the vaccines does not enter the cell nucleus or interact with the DNA at all, so it does not constitute gene therapy.

Gene therapies can have long-lasting effects because they permanently change the cell's DNA, with these changes being inherited by any daughter cells that result if the cell divides. In contrast, mRNAs are always transitory and are not inherited by daughter cells, making them ideal for use in vaccines.