Was a U.S. Navy chaplain named Drew d'Auguste present at the execution of California Gov. Gavin Newsom, and could d'Auguste attest that the U.S. military is "waging war against Satanic forces"? No, that's not true: The claim was published on a known satirical website. Newsom was not executed, and Lead Stories could not establish the existence of a Navy chaplain named "Drew d'Auguste."

Chaplain Drew d'Auguste, a Christian in the U.S. Navy Chaplain Corps, was not speaking figuratively when he told Real Raw News the 'White Hat' partition of the U.S. Armed Forces is waging war against Satanic forces that have enveloped the syncretistic society in which we live today.

Chaplain d'Auguste was present at Gavin Newsom's execution, and said he saw 'evil' in Newsom's eyes even before the disgraced California governor began hurling Latin curses at the soldiers tasked with effecting Newsom's hanging.

'He looked at me; my blood ran cold,' Chaplain d'Auguste said. 'His gaze froze my soul.'

The site for Real Raw News could not be reached at the time this story was written. Repeated efforts produced only a page saying, "This site can't be reached ... realrawnews.com took too long to respond."

This is how the article looked on Real Raw News: 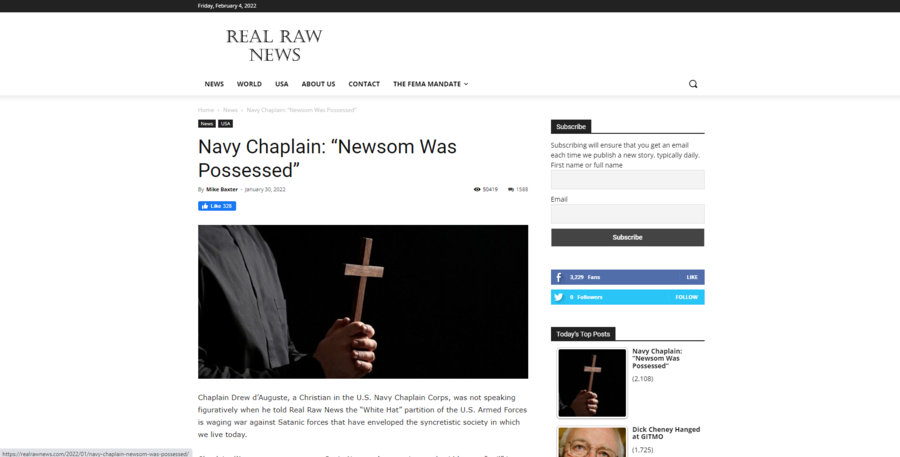 Lead Stories has already debunked claims that Newsom was convicted by a military tribunal at Guantanamo Bay and hanged. Those fact checks, which were the results of other articles published by Real Raw News, can be found here and here.

The U.S. Navy did not return the inquiries from Lead Stories about the existence of a chaplain named "Drew d'Auguste" at this writing but we will update this story with any relevant response.