Have COVID-19 shots increased "serious injury" from vaccines by over 2,000% in Germany? No, that's not true: A press and public relations officer for DKG, the German Hospital Federation, says information was improperly analyzed by a conspiracy theorist. He added, "Millions of people had side effects after their vaccination. The vast majority of these side effects disappeared after a short while and [were] harmless." Typical complaints included low-grade fever, muscle pain and tiredness.

The claim appeared in an article (archived here) published by the en Volve website on February 6, 2022, under the headline "Startling New Data From Germany Shows Cases of Serious Injury From The Vax Have Increased Over 2000%." It opened:

Cases of serious jab injury have increased twenty-fold in Germany, according to new data coming out of German hospitals.

German data analyst Tom Lausen has been evaluating the figures from hospitals, the Robert Koch Institute and the DIVI intensive care register since the beginning of the pandemic. In an interview with Milena Preradovic, Lausen said he had calculated that based on the accounting data from German hospitals, the jabs have led to an alarming incidence of serious side effects that have required medical intervention. 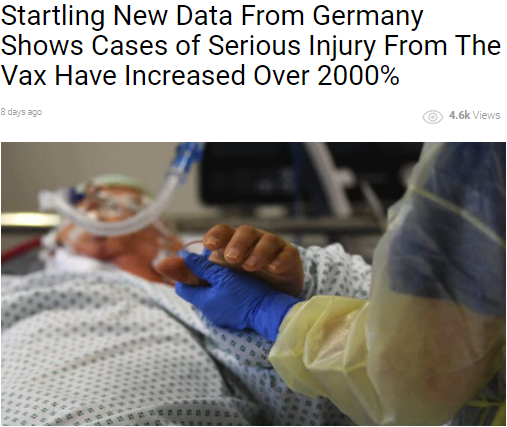 The en Volve article uses figures from Germany's Institute for the Remuneration System in Hospitals GmbH (InEK), which were evaluated by Tom Lausen, described in the article as a data analyst. The InEK records data about hospitalizations in that country. As in the United States and other countries, International Classification of Diseases (ICD) codes are assigned, depending on the details of each case. In a February 15, 2022, email to Lead Stories, Dr. Jörn Wegner, a press and public relations officer with DKG, said "Lausen's analysis is so simple that it went wrong":

The only thing he did was [count] the cases with the ICD Code U12.9 ('Unwanted side effects after Covid-19 vaccinations, not further classified'). But this does not mean, that every patient, who got the code U12.9, suffered under vaccination side effects. It means, that any patient treated in hospital and suffering under a symptome, that could be potentially a side effect of the vaccination, got this code. For example: A person, who was vaccinated some days ago and has to be treated in a hospital because of a strong headache, will be coded with U12.9 (and lots of other codes). Even when it comes out, that the headache is caused by a brain tumour, U12.9 will remain in the statistics. U12.9 also applies for much more hospital patients, who were recently vaccinated and who are suffering under symptomes like unspecified feeling of sickness, muscle pain and many more.

Wegner described Lausen and his work by saying:

This 'analysis' was done by Tom Lausen, who is not a data analyst but one of the better known German conspiracy theorists concerning hospitals and health care. Therefore his 'report' was published also in English on a website full of fakenews concerning Covid-19 and vaccinations.

In the same email, Wegner noted additional limitations of diagnostic code U12.9, saying it doesn't give any information about the severity of the side effects:

Millions of people had side effects after their vaccination. The vast majority of these side effects disappeared after a short while and [were] harmless. In Germany, Paul-Ehrlich-Institut is monitoring the side effects of the vaccinations: This report [is based] on scientific data and shows that the vaccines are very safe.

As Germany is liable for any serious side effects, people can apply for ... compensation in case they suffer from any lasting symptomes that could be connected to their vaccination. So far we count only 1600 applications, and the vast majority of them [were] not justified. More than 63 million people in Germany have received at least one dose.

The Paul-Ehrlich-Institut (PEI), an agency of the German Federal Ministry of Health, reports on suspected cases of adverse reactions or vaccination complications from the mRNA vaccines by Pfizer (Comirnaty) and Moderna (Spikevax), and vector vaccines by AstraZeneca (Vaxzevria) and Johnson & Johnson (COVID-19 Vaccine Janssen). According to the Safety Report 27 December 2020 to 31 December 2021 (click on link under Safety Reports), which comes from Germany's Robert Koch Institute (also part of the health ministry), more than 148.7 million vaccinations were carried out:

Vaccine manufacturers are required to report adverse events to regulatory authorities, including U.K. and European health organizations, as well as the Vaccine Adverse Event Reporting System (VAERS) in the United States, which is run by the Centers for Disease Control and Prevention and the U.S. Food and Drug Administration.